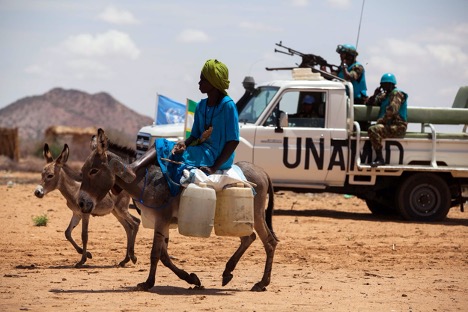 The 13-year-old African Union-United Nations Hybrid Operation in Darfur – known as UNAMID – officially ended on December 31, 2020 and is transitioning to a newly-established UN Integrated Transitional Mission in Sudan (UNITAMS). As the UN’s first-ever hybrid peacekeeping operation, UNAMID is an important bellwether for predicting the role that the African Union (AU) may play in regional peacekeeping in the future. Despite a challenging operating environment, UNAMID achieved some limited successes and the AU played a critical ‘middleman’ role between the UN and the Sudanese government.

As UN peacekeeping missions become increasingly robust, and therefore often politicized, this middleman role for regional organizations – such as the AU through joint peacekeeping operations – will likely continue to be necessary. So what is the legacy of UNAMID, and what lessons can we learn from its date?

UNAMID’s establishment followed four years of civil war between rebel groups and the Government of Sudan that led to sustained government-backed violence against civilians. During the civil war, the ongoing United Nations Advance Mission in the Sudan (UNMIS) provided some limited support to peace negotiation efforts led by the AU through its African Mission in Sudan (AMIS) in Darfur. However, the UN’s attempts to expand UNMIS into Darfur following the 2006 Darfur Peace Agreement were rejected by the Sudanese government who refused a solely UN-led peacekeeping mission.

To appease the Sudanese government, the UN established UNAMID as a hybrid mission with the AU and emphasised that the mission would have an “African character”, which meant that most uniformed personnel and leadership positions would be filled by citizens of Sudan’s neighboring countries.

Despite challenging circumstances, UNAMID achieved some limited successes throughout its tenure. The Effectiveness of Peace Operations Network’s (EPON) final evaluation of UNAMID found that AU and UN forces “dutifully fulfilled mandated tasks”, but issues such as the lack of host government consent and weak UN Security Council political will hinder peace efforts. Specifically, UNAMID implemented some initiatives to protect civilians from violence, increase humanitarian access, and establish inclusive community peace dialogues, despite a national-level peace accord never being fully achieved.

However, in addition to fulfilling its mandated tasks, a critical, but informal, role of the AU within UNAMID was as a ‘middleman’ between the UN and the Sudanese government. Establishing UNAMID required lengthy negotiations with the Sudanese government who continuously rejected the deployment of a UN-led mission in Darfur.

Then-Sudanese President Omar al-Bashir insisted on any peacekeeping mission being led and staffed by the AU, similar to the ongoing AMIS mission which was faltering due to a lack of financial and logistical support. This was likely because al-Bashir’s government was carrying out – or at least tacitly approving – many of the attacks conducted in Darfur and did not want international interference, but publicly the Sudanese government denounced UN peacekeeping as a cover for international political intervention in Darfur’s civil war.

The role of the AU

As a result, the unique hybrid structure of UNAMID ensured that the mission mandate was shaped to a significant extent by the AU and the AU had a central role in the peace process – at the expense of sidelining the UN – which was considered more palatable to the Sudanese government. Although this bifurcated command-and-control structure caused coordination issues discussed below, the hybrid character of the mission led by the AU was a primary reason that the Sudanese government agreed to any peacekeeping mission in Darfur.

Although its successes were limited, AU’s role as a middleman for UNAMID allowed the mission to be able to have some impact in Darfur in allowing humanitarian access, protecting civilians, and negotiating subsequent peace agreements such as the Doha Document for Peace in Darfur (DDPD).

Moving forward, there may be an increased need for regional organizations to play a similar ‘middleman’ role in UN peacekeeping operations as missions become more robust. Traditional UN peacekeeping missions with limited observe and enforce components have become increasingly rare as current conflicts have transitioned from interstate wars to civil wars or insurgencies. To adapt to new conflict environments, peacekeeping missions have evolved to encompass activities traditionally within the development or stabilization spheres. However, missions operating in active conflict environments or those with stabilization goals often require the UN to identify aggressors, which erodes the foundational principle that the UN is an impartial actor.

The importance of trust

As a result, host governments and local communities have lost trust in the neutrality of UN peacekeeping missions and are less likely to give consent for mission deployment – although this can also be used as an excuse for governments to not allow UN deployment in areas with government-sanctioned violence, as was the case in Darfur.

Deploying hybrid peacekeeping missions, such as UNAMID, or phased partnership missions, such as those in Sierra Leone and Liberia in the 1990s and early 2000s, where regional organizations lead implementation and can act as the ‘middleman’ could mitigate some of these issues. Peacekeeping operations where regional organizations play an active role in shaping the mission mandate and structure could lead host governments to be more likely to give consent for deployment in contrast to missions designed and implemented solely by the UN.

Furthermore, the AU, for example, has demonstrated strong capabilities to undertake stabilization and counterterrorism activities and, unlike the UN, is more willing to undertake peacekeeping missions within an active conflict. Allowing regional organizations like the AU to lead missions in these environments could allow the UN to maintain its foundational principle of neutrality and have a role in traditional peacekeeping activities after a peace agreement is reached.

However, the UNAMID model is far from ideal. There were serious coordination challenges between the AU and UN throughout UNAMID’s tenure that hindered implementation and should be addressed in future hybrid or phased partnership missions. This includes ensuring that the UN works in partnership with regional organizations in developing the mission mandate and budget to avoid strategic disconnect.

During UNAMID, the UN controlled much of the budget and mandate without significant input from the AU, which often left the mission disconnected from the needs on the ground as experienced by AU forces. This type of coordination is easier said than done considering the political tensions between the UN and many regional organizations, but allowing regional organizations a strategic role from the outset will avoid confusion over roles, responsibilities, and end goals during the mission’s lifecycle.

Another approach that would increase autonomy for regional organizations to undertake phased partnership missions would be allowing UN assessed contributions to be used to partially finance peace operations undertaken by regional organizations. The UN considered this reform several times in the last decade to support AU peacekeeping missions, but ultimately rejected any agreements over concerns of accountability standards and the AU’s financial solvency. A lack of resources is one of the primary barriers to the AU’s ability to deploy peacekeeping missions, so institutionalizing direct financial support to the AU would allow it to act as a ‘first responder’ to many regional conflicts with follow-up UN support after a peace agreement is reached.

As UNAMID transitions to UNITAMS in Darfur, the mission’s legacy offers a number of important lessons learned for future hybrid peacekeeping operations. The AU’s role as a ‘middleman’ in UNAMID to demonstrate regional legitimacy and obtain host government consent – albeit unreliable consent – is only likely to be increasingly important as perceptions of the UN’s neutrality decline and the need for peacekeeping operations to undertake stabilization activities increases. However, successful coordination between the UN and regional organizations will require regional organizations to have both true operational and financial independence – or at least equal authority – when designing and implementing hybrid missions.

The UN can no longer do it all alone, and its operational and financial structures must reflect that.

Rachel Furlow is an MSc Candidate at Georgetown University’s Edmund A. Walsh School of Foreign Service focused on post-conflict development and humanitarian aid policy in the Middle East and East Africa. Follow Rachel on Twitter at @RachelFurlow.

The views expressed here are solely those of the author and do not reflect the views of any institution.