In this fascinating article, Ben Armstrong explores the evidence around mobile usage and electrification to ask what implications developments in these two areas can have on a country’s democracy and GDP. Ben Armstrong is CEO at WellDone, an organization using mobile technology to collect and communicate critical infrastructure data.

In rural Nigerian hospitals, doctors hold mobile phones with their teeth as they deliver babies by the dim light of a Nokia screen. The power has long since died, and doubting that it will return, doctors transform the nearest handset into a surgical device. Mobile access in Africa is more reliable than power, water, or sanitation infrastructure. While historically unorthodox for a reliable mobile network to precede a reliable power grid, robust mobile access can improve the speed and accountability with which reliable power infrastructure is distributed in Africa.

The continent’s leap past landlines to use mobile phones for both mundane and innovative purposes has excited telecommunications companies and prompted expanded investment in mobile infrastructure. Data indicates that mobile coverage includes 59% of Africans, while only 35% of the population has access to electricity. There are 33% more cell phones than toilets on the continent. The mobile network has become the strongest infrastructure that countries can boast.

What matters in the final analysis, however, is not just that infrastructure exists but that it functions comprehensively and reliably. Often, across the continent, where infrastructure exists, it remains sparse and unreliable. For example, on average across the continent, firms go 1 in 5 days without power and at least 1 in 3 water handpumps are broken at any time, according to World Bank and UN statistics. Even cell towers rely on diesel generators with the expectation that the grid will fail often enough to interrupt service. Functioning infrastructure is the single biggest factor shaping the investment climate on the continent — more so than corruption or red tape, World Bank surveys have concluded. 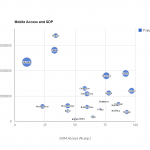 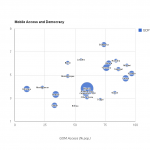 A more democratic country is likely to have better mobile access than an undemocratic country. The fundamental point makes sense, as mobile infrastructure is often developed more quickly by private enterprise. Moreover, restrictions on communication in authoritarian regimes might not shrink the demand for mobile access, but it does reduce operators’ ability to meet it. That there is no strong relationship between mobile access and GDP might surprise those who see mobile as a boon for business and innovation. While mobiles might accelerate financial transactions and unlock new opportunities for micro-entrepreneurs, the largest drivers of GDP growth are not affected by increases in mobile access at the margins. 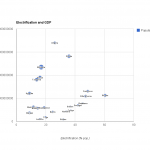 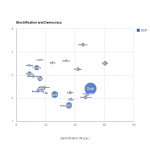 The main conclusion here is that more electrification has not translated into more democracy, even though broader access to electricity implies increased opportunities for speech, commerce, education, and participation in government. It could be that electrification has provided largely unreliable power, so the statistic is a representation of a country’s investment in power, but not necessarily access to it. Another explanation is that electrification is more prevalent in resource-rich countries, where the rentier effect has stalled democratic development. Indeed, two of the undemocratic, strongly electrified, states are resource-rich countries (Nigeria and Sudan), where robust infrastructure might be related to extraction. It is more surprising that African democracies have struggled so much to electrify, while electrification has substantial political benefits to those in power, and the access to infrastructure financing is more available for democratic states.

These dual trends — rapid growth in mobile access, stagnating electrification — invite use of the mobile network to illustrate where the power grid is weakest and call for improvements. A simple first step is to place an inexpensive mobile sensor in diesel generators that serve as backup power for cell towers. The mobile sensor can read how much diesel is pumped and report the data back by the mobile network. The diesel data will reveal how often the grid fails as well as how expensive these grid failures are for business.

Real-time data collection with mobile networks can identify the cost of poor and absent power, which guides governments where to invest and companies where to establish operations. Political leaders who claim to deliver power to their districts and campaign on these improvements become accountable to the voters through data. While power can often be an instrument of patronage politics, reliability data pressures political leaders to prove their effectiveness by delivering power as a public good with uniform reliability. Otherwise, they invite strong populist critics who can wield stark evidence of their favoritism or false promises. If power data become indicators for companies looking to expand and citizens looking to vote, the pressure for reliable electrification is on.