Governments, researchers and stakeholders have often recognized education as the single most potent instrument for the emancipation of marginalised groups and for combating poverty and inequality. Kenya’s investment in education, particularly the free primary education policy, has substantially increased school enrolment rates, and reduced gender disparities in school enrolment.

An analysis by IEA Kenya has found that education is key to economic gender equality. As shown in table 1, there is a positive relationship between the mean (average) years of schooling and mean wage. The highest mean wage is among individuals who have attained postgraduate level at Ksh. 74,711 and the lowest mean wage of Ksh. 4,553 among individuals with no education.

The political power of education

Scholars have long speculated about the political impact of education, variously arguing that it instils acceptance of existing authority and that it empowers the disadvantaged to challenge authority. A study undertaken in Kenya to assess the political and social impacts of a girls’ merit scholarship incentive program found that the experience of secondary education made young women more politically informed and less differential to authority.

Less developed countries have experienced massive increases in both education and democracy over the past half century. The study interrogates how these trends might be interrelated and suggests that educated women could be a powerful force, driven to demand for accountability in government decisions and challenge the status quo. These findings are interpreted through the lens of modernization theories that argue that education weakens traditional ascriptive attachments on gender, hereditary position, ethnicity or religion, in favour of merit. 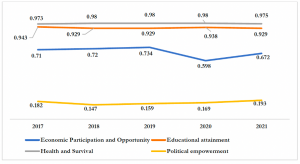 This reflects both ingrained patrimonial and patriarchal norms, and the failure of national politicians – mostly men – to take measures to promote the election of women in a highly competitive political system. Most notably, despite the Kenyan Constitution’s in article 27 (8) mandating that “not more than two thirds of members of the elected house can be of the same gender”, parliament has repeatedly failed to introduce the legislation needed to ensure gender balance – even after a rebuke from the Chief Justice of the Supreme Court.

Partly as a result, women continue to be excluded from decision making, from the home to the highest levels of government. Following the 2017 general elections women made up just 21.43 % of parliament. Although this was up from 16% in 2013, it is still the lowest figure in the region, as compared to Rwanda (64%), South Africa (42%), Tanzania (36%) and Uganda (35%). In all these countries, ‘gender quotas’ have proven to be an effective way of enhancing women’s participation and representation in the political sphere.

Limited female representation within the corridors of power appears to have a substantial knock-on impact on women’s empowerment more generally, which could explain why Kenya struggles with gender equality in other areas. Despite improvement in female literacy over the years, and the fact that women make up a majority of the population, female voter participation is still low in comparison to male participation. In its report on the 2017 general elections, the Independent Electoral and Boundaries Commission (IEBC) notes that 47 percent of the registered voters were female while 53 percent were male. Meanwhile, of the 14,501 candidates who participated in the 2017 election, just 1,259 (8.7 percent) were women.

What needs to happen to change this situation?

First, the Supreme Court, IEBC and civil society must compel parliament to introduce changes to the electoral system to bring the 2/3 gender rule in the constitution to life. The private sector should also be incentivized to promote gender parity, for example through tax breaks for organizations with a strong representation of women from the board room to the shop floor.

Political parties must be compelled to implement the gender equity principles enshrined in the national constitution and electoral laws, changing their own constitutions and regulations to enhance the identification, selection and nomination of women during the electoral process. It will also be essential for both parties and the security forces to take decisive action to eliminate violence during party primaries and national elections – including online intimidation and attacks.

Only when all of these reforms happen at the same time, will the educational gains of women lead to their political empowerment. When women are better represented in politics, women’s voices will become more powerful, and the issues that impact women are more likely to take centre stage in public discourse.

Oscar Ochieng is a communication specialist and holds a Bachelor’s Degree in Communication and Sociology from the University of Nairobi.

Darmi Jattani is an economist with a bachelor’s degree in Economics and Statistics from University of Nairobi, pursuing a Master of Economics at Kenyatta University.