The number of people from sub-Sahara Africa seeking refuge almost tripled between 2009 and 2019. During that period, flight and migration from African countries have become major political issues in many Western countries. Right-wing groups have instrumentalized increased refugee numbers, polarizing the debate in a bid to mobilise support for their own political agenda.

To manage shifting public opinion on this issue, governments across Europe embarked on a strategy aimed at reducing refugee flows by tackling the root causes of flight, which in turn placed development cooperation in the spotlight. For example, the so-called ‘Masterplan Migration’ from the German ministry of the interior states that “aid is the most humane and effective way to counteract the causes of flight”.

Whether development aid can actually do this remains controversial, however. Recent evidence suggests that development aid can indeed affect refugee flows, but that this effect is ambiguous and much smaller than some policymakers would like to believe.

As with so many aspects of this complex and controversial issue, faulty assumptions and misperceptions have clouded the conversation to the detriment of the most vulnerable members of our global society.

At the end of 2019, roughly 80 million were recorded as being forcibly displaced globally. More than 50% of these people fled to other areas of their own countries, while approximately 26 million crossed borders to seek protection as refugees.

The data contradict the popular wisdom that hosting refugees is primarily a European phenomenon. Figure 1 illustrates that 87% of all refugees are hosted by developing countries, while only 13% live in high-income countries.

Figure 1: Shares of worldwide refugee population by income class in 2019 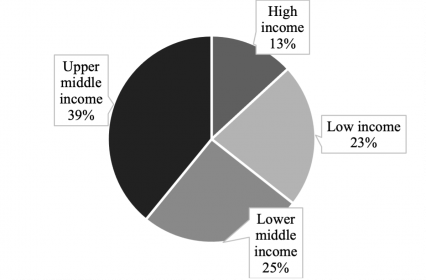 In terms of the regional distribution (Figure 2), African and Middle Eastern countries combined host about 70% of the worldwide refugee population, which demonstrates the remarkably unequal burden-sharing between rich and poor countries – a reality that is often overlooked in policy debates on this issue.

Figure 2: Shares of worldwide refugee population by world region in 2019 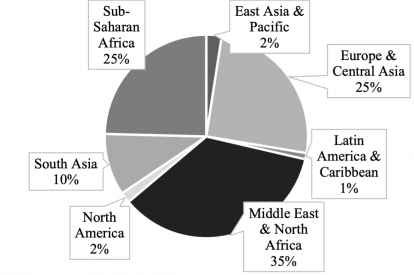 Refugees leave their countries by force, not by choice

In Western countries, the public tends to overlook the distinction between migration and flight, blurring the line between migrants and refugees by reducing refugees’ motives to their alleged search for better economic conditions. In fact, refugees are individuals that do not leave their country by choice but by force.

So what are the forces that cause people to flee, and how can development aid influence those factors?

First, the economic conditions of origin countries might explain, to some extent, people’s motivations to flee to another country, as “a threat to one’s economic security may be as compelling as direct physical threats to life insofar as survival in economically precarious societies can be compromised by economic breakdowns”. Development policy could have the potential to combat this cause of flight, provided that it can foster economic stability and prosperity. Recent evidence suggests that receiving aid effectively reduces recipient countries’ refugee outflows in the medium to long term because it helps to boost economic growth.

Despite this, the question of whether aid really does reduce refugee flows remains hotly contested. While some researchers doubt the positive relationship between aid and economic growth, others dispute the idea that rising incomes necessarily reduce migration glows. As Clemens and Postel argue, “Emigration from middle-income countries is typically much higher than from poor countries; countries earning $8,000-10,000 per capita annually have three times more migrants as countries earning $2,000 or less.” It is only after a country reachers a per capital GDP of $10,000 that this relationship reverses (figure 3).

There is also a serious question mark over how quickly development aid can work. The evidence from some studies is that aid has no immediate effect on refugee flows in general. However, this may not be true of all types of aid.

Humanitarian aid supports people in emergency situations, which man mean that they have less need to flee to other states. Consequently, a country receiving more humanitarian aid has on average a lower refugee outflow. But problem with this “solution” is that it often does not lead to an acceptable quality of life for the people concerned.

Individuals who were forced to leave their homes may flee to the nearest place where they find protection and the essentials to survive, so that they end up in a camp inside their country rather than outside. As a result, there is persuasive evidence of a positive association between aid inflows and the number of internally displaced people.

This is problematic for two reasons. First, internally displaced people are often less visible internationally, while facing many of the same challenges as refugees. Second, converting refugees into IDPs shifts the responsibility for supporting vulnerable populations on to countries that typically lack the means to do so.

Put another way, focusing on the provision of humanitarian aid and disaster relief reflects a ‘migration management’ approach as opposed to one that seeks to deal with the ‘root causes’.

This is also true of strategies that target aid to the neighbouring countries of crisis-hit states to help them accommodate refugees within their borders, so that they do not reach the territory of international donors, and policies that make the dispersal of development aid conditional on the adoption of specific repatriation schemes.

These policies have been found to have a “donor-favoring” effect on refugee flows, but again there are major ethical questions related to this approach. Perhaps most significantly, neighbouring countries may be destabilised by the same events that generated the refugees, are often governed by authoritarian governments with poor human rights records, and do not allow refugees to exercise a full set of political and economic rights.

Partly as a result, this option is likely to prove an unattractive one for many refugees, which raises the prospect that over time it will also prove to be less effective at reducing the flow of people to Europe.

Aid may fuel violence and repression rather than dampening it

Another important motivation for flight is political oppression and persecution. Although donors frequently state their intention that their development aid promotes human rights, the actual consequences of aid on recipient countries’ human rights performances are not obvious.

On the one hand, aid could – if targeted at the right groups – empower civil society groups to resist oppression, and protect vulnerable groups in society. By contrast, recent research has found that when aid is given to repressive regimes without sufficient safeguards it tends to “harm political rights, [and] foster other forms of state repression”.

Policymakers and to an extent the general public in donor countries increasingly perceive development aid as an instrument to prevent migration by fighting the root causes of flight. This narrative is a result of an overarching political and societal environment that sees Africa as a crisis continent and migration from African countries as a solvable problem.

The related anti-immigration agitation of right-wing parties and the pandering of many governments to such groups has only reinforced these tendencies. However, the notion that development assistance can shift the flow of people in effective, predictable, and ethical ways is overly simplistic.

Employing development aid to ‘keep refugees away’ is ethically problematic, especially considering that donor countries host only a small share of the global refugee population to start with. It may additionally be an ineffective approach in terms of achieving its objectives: in many cases, the effects of development assistance on both short-term refugee flows and long-term root causes are modest in magnitude and ambiguous.

This is by no means to say that donor countries should stop providing development aid in general, but rather that they should do so to promote the original goal of development cooperation; that is not to deter refugees from fleeing but to promote sustainable development and fight poverty for its own sake.

Only in this way can development aid ultimately truly tackle the causes of flight.