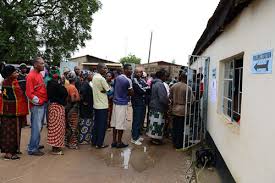 In this post Nicole Beardsworth gives us insights into the poll that people are not talking about: the constitutional referendum in Zambia. Nicole Beardsworth is a South African political analyst and doctoral candidate at the University of Warwick.

On 11 August, Zambians will go to the polls not only to elect a president and parliament, but also to amend their constitution. The referendum on the amended constitution and bill of rights has received relatively little scrutiny and has largely been subsumed by party campaigning ahead of the crucial elections. In their haste and unwittingly, Zambians may end up voting in favour of the one thing that has plagued the country since independence – an overly powerful executive.

The drive for a new constitution and resistance to heavy-handed changes to the existing foundational document have long been an arena of protest and contestation between the state and non-state actors in Zambia. Following six aborted constitutional amendment or review processes spanning over forty years, newly-elected President Edgar Lungu brought in the Constitutional Amendment Act which would have a profound impact on the elections that were scheduled for late 2016. In January 2016 as a result of popular pressure, the president signed in a constitutional amendment which changed the electoral system and introduced a two-round electoral system for the presidency. This came hot on the heels of the 2015 election which threatened the emergence of an alliance between the opposition and civil society on the ruling party’s failure to deliver a new draft constitution.

The amendment introduced popular changes such as the requirement that the president be elected by a majority (more than 50%) of the national vote – though no president has attained a majority of the presidential vote since 1996. In addition, the amendment introduced a presidential running-mate requirement to elect the vice president who would then assume the presidency upon the incapacitation or death of the president. This was critical and extremely popular, as the death of two sitting presidents – Levy Mwanawasa in 2008 and Michael Sata in 2014 – had forced the country into expensive and disruptive unplanned electoral periods. As a result of the presidential by-elections, the election to be held on 11 August 2016 will be the country’s 5th in 10 years. The amendment also affected the Zambian judiciary by creating a new constitutional court which would preside over constitutional issues and – crucially – electoral challenges. The president amended the constitution in an attempt to lend his government legitimacy in the eyes of international donors and undermine both civil society’s and the oppositions’ attempts to denigrate the party for failing to deliver on its 2011 promises. Parts of the constitution – such as the Bill of Rights – cannot be enacted by parliamentary and presidential assent but must instead be put to a referendum.

However, there has been little interrogation of the constitutional amendments, and it has escaped the notice of civic bodies, constitutional experts and the donors who funded large parts of the constitution-making exercise that (amongst other problems) the draft actually extends rather than diminishes executive powers. Shockingly, the draft on page 30, Article 81 (4) allows that “the President may dissolve Parliament if the Executive cannot effectively govern the Republic due to the failure of the National Assembly to objectively and reasonably carry out its legislative function.” This allows the executive to make a judgement call about the efficacy of parliament which completely undermines the principle of the separation of powers. The articles following 81 (4) make the constitutional court the final arbiter of the dissolution of parliament, thus exposing the judiciary to high levels of political pressure and further undermining the separation of the three arms of government.

Another area where the constitution entrenches rather than limits presidential power is with regards to the judiciary. Articles 137, 138 and 140 are unclear and contradictory on the appointment process of judges, apparently allowing the president to exercise a substantial degree of control over their appointment – as happened with the appointment of the six constitutional court judges in 2016. There are a number of other problems with the draft such as the decision to make the Supreme Court and Constitutional Court rank equivalently, which opens the law up to the judicial equivalent of a tennis game where contentious cases are bounced back and forth between the two courts as neither has superior jurisdiction to reach a final verdict. The procedure for appointing the electoral commission is also left largely unaddressed – subject to the later creation of procedures for its constitution. This has meant that in practice, the president is able to appoint members to this crucial body subject to ratification by the National Assembly. However, ratification often means little in practice when the ruling party has a majority in the house.

In 2013, over 300 civic bodies and opposition parties in Zambia formed the Grand Coalition on the Constitution to push for the creation and enactment of a new foundational document. However, the consensus that existed within civil society in 2015 had dissipated by late 2016. This is in part because key members of the Coalition sat on the constitutional review process’ technical committee, and thus endorsed the final draft. In an event convened by the Council of Churches of Zambia (CCZ) on 28 July 2016, constitutional law expert Professor Muna Ndulo from Cornell University picked apart the most problematic aspects of the draft. This led one implicated CCZ Bishop to hang his head and denounce the ‘brown envelope’ culture that had infiltrated the organisation and other civic bodies, clouding their capacity to act independently. While some groups such as the CCZ have taken a more measured view of the new charter, many of the Coalition’s members have been vocal in their support of the draft. It also appears that donor pressure, inordinate focus on the bill of rights and a lack of adequate engagement with the rest of the draft has led to blanket endorsements of the amended constitution from key civic organisations.

The referendum has been scheduled for 11 August, the same day as the general elections and has thus been overshadowed by party politics. While the PF has been advocating for the ‘yes’ campaign, the opposition has allegedly told their constituents not to mark the ballots at all. This appears to be largely due to their belief that it will be impossible for the ‘yes’ campaign to succeed. In order to pass, the referendum is required to garner the 50%+1 of eligible voters – a number that is impossible to determine accurately due to population forecasting and the outdated 2010 census results. However, if the referendum is deemed to have passed and the PF wins the elections, it is unclear who might challenge the result and whether such a challenge would be successful in the new Constitutional Court. In early March, President Lungu’s appointment of six judges to the Constitutional Court was met with resistance and concern when it was revealed that none met the criteria for appointment to the post and three were known to have close personal links to the president. This raises concerns for both the potential for the fair hearing of an electoral challenge and for challenging the referendum’s legality in court. Sadly, for Zambia, the 2016 constitutional amendment process yet again presents a missed opportunity for creating a new, more progressive founding charter that enshrines critical checks on executive power.

*This article is indebted to the analysis of the constitution written by prominent constitutional expert and Cornell Professor Muna Ndulo.