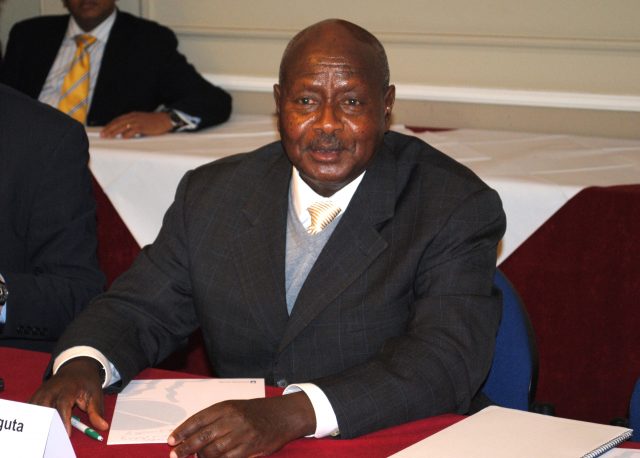 Twitter and WhatsApp are abuzz. Posters screaming “Youth Against Dictatorship” cover Kampala. Activists planning a mock funeral for the President are under arrest.

The furore comes after the announcement in the Uganda Gazette that a Constitutional (Amendment) Bill is soon to be published, paving the way for it to be tabled in Parliament. Among other provisions, the omnibus bill is expected to propose scrapping article 102(b) of the Constitution, which sets a presidential age limit of 75 years. Once the bill is gazetted, a Constitutional Review Commission will be appointed to gather citizens’ views on the proposed amendments, although it is unclear to what extent the Commission could influence the fate of the crucial, age limit article. Uganda’s President Yoweri Museveni, in power for over three decades, will be turning 76 ahead of the next elections in 2021, making him ineligible to run unless the age limit is dropped. The latest proposed constitutional change comes after Museveni already saw through the removal of presidential term limits in 2005.

Opposition to the age limit amendment has come from all quarters. Four-time opposition presidential contender Dr. Kizza Besigye has made a series of statements, taking to Facebook to declare, “The people of Uganda are definitely closing in to take back their power and embark on a TRANSITION to a new dispensation.” The opposition Forum for Democratic Change, Democratic Party and Conservative Party have condemned the move while youth from the three parties are behind a pro-age limit campaign dubbed Nchi Yetu (“our country” in Swahili).

Somewhat less predictably, members of the ruling National Resistance Movement (NRM) youth league have also rallied around a campaign against the proposed changes, leading to their hasty arrest. More concerning still, from the President’s perspective, is the opposition to the age limit amendment amongst his own rank-and-file MPs. A survey of parliamentarians conducted last year by the civil society network CCEDU with the support of NDI pointed to high levels of unease over the then anticipated move to scrap age limits. Of the 185 respondents (from a randomly selected sample of 196), 73 percent said they would not support a constitutional amendment on age limits. This included a large majority of NRM MPs (65 percent) while Opposition and Independent MPs were overwhelmingly against (97 and 81 percent respectively). Interestingly, MPs from the NRM’s traditional strongholds, the Western and Central regions, were most likely to oppose an amendment. A more recent and less systematic effort to survey MPs spearheaded by the independent Observer newspaper reveals an enduring, lukewarm attitude towards the proposed changes within the NRM.

The various pro-age limit campaigns now emerging, including those supported by a range of civil society organizations, have no intention of letting legislators off the hook. Activists have been circulating the phone numbers and emails of legislators, imploring voters, “Tell them we [want] the clause to remain intact. That one call, that email, that text message may be key in defining the destiny of our country.”

Yet however strong the pushback, it is also clear the President’s camp has its own plan. Indeed, whereas Museveni has repeatedly insisted he was “not interested in age limit talk”, his supporters launched a series of semi-coordinated actions shortly after the 2016 elections, the aim being to cultivate an appearance of grass-roots pressure for Museveni to stay. A number of NRM district conferences passed resolutions calling on MPs to lift presidential age limits. An NRM MP also tabled a private members bill in Parliament calling for the removal of age limits for judges. This was widely seen, though, as a ploy to start a debate during which the issue of presidential age limits could be introduced.

It remains part of the government strategy to present pressure for a constitutional change as originating outside of State House. In an article entitled “Don’t distort constitutional amendment debate”, the government spokesman affirmed, “the issue of age limit has been raised in various forums with many people openly urging President Museveni to stay on and complete what they deem unfinished business.” Even as Museveni enacts the role of disinterested bystander, though, internal manoeuvring continues to intensify.

The plan to introduce legislation to Parliament was apparently adopted after a proposed constitutional referendum was deemed too risky.[1] Charged with mobilising their colleagues is a small group of loyal MPs who have been actively advocating for the proposed amendment in the corridors of  Parliament. There are also plans, according to one MP, “to go district by district, convincing councils to pass resolutions, which the MPs will be compelled to support.” This “convincing” will not depend on the NRM leaders’ powers of persuasion alone. Reports are filtering through that the police and military will receive more equipment to crack down on popular protest. At the same time, a large campaign war chest has been amassed, leading NRM heavyweights to jostle over who will act as campaign coordinator and thereby control associated patronage resources. Some of the money is already reportedly earmarked, including: (a) for NRM MPs, who will receive USh3m (roughly £650) per caucus meeting, although there are also rumours in Parliament that MPs may demand a total of as much as Ush300m each;[2] (b) for as yet unpaid members of the NRM Central Executive Committee, who will start receiving a salary USh25 (£5,400) per month, close to that of the highest paid civil servants and larger than the total pay package of an MP; and, (c) for members of the National Executive Committee, who will receive USh9m (nearly £2,000) per month.

Through a combination of coercion and money, Museveni’s camp still seems likely to succeed in pressuring Parliament into removing presidential age limits. The extent of opposition along with the elaborate and costly plans to overcome it nevertheless speak to Museveni’s increasingly strained hold on power. In 2005, it took a one-off, Ush5m bribe to get MPs to scrap term limits, a move which was at the time shocking and now seems almost pedestrian. The campaign to remove term limits was also fraught, but it came before the rate of patronage inflation reached the current, dizzying heights.

Hovering above the current struggle is the question of what will become of the NRM’s legacy, and thus what lies in Uganda’s political future.[3] After first seizing power in 1986, Museveni promised “fundamental change” and later oversaw a constitutional review process, which was at the time praised by many. The accolades have long since petered out, leaving prominent figures like Kizza Besigye to denounce the increasing personalisation of power under the NRM, quipping, “President Museveni has turned himself into the Constitution.” Museveni’s own supporters are hardly reassuring on this point, with one MP insisting, “The person who has managed to build all [the] institutions is Museveni. If he has built the institutions, which have ensured that the country is stable, why should he be denied the chance to continue leading the country?” It is unclear what exactly is distinctive about “institutions” when they are presumed to come from—and seemingly also to depend on—a single individual.

Ultimately, given the kind of political order Museveni has cultivated, it is now easier to imagine a scenario whereby the age limit is scrapped and he continues as President than it is to imagine the alternative. Should the age limit remain, the ensuing succession battle could easily fracture the NRM, as has happened to numerous other dominant parties.[4] Opposition contenders, most obviously Besigye, could have another go at winning an election in 2021. But it is hard to picture Museveni—or, crucially, the military upon which he has focused so much of his energy—accepting a Besigye win. Indeed, as has proved the case in Uganda’s past, should Parliament resist executive pressure, the balance of power would likely lie with the security forces. But then they too contain their own internal factions.

In short, Museveni’s Uganda is one where, paradoxically, there would be far more political uncertainties introduced if the Constitution remained intact with age limits preserved. That’s in the short-term, of course, as lifting age limits only postpones the inevitable succession. Meanwhile, the many young Ugandans who have only ever known a Museveni presidency will, again, see their dream of a change deferred. And, to borrow a line from Langston Hughes, what happens to a dream deferred?[5]

UPDATE: On July 13th, the government surprised MPs by tabling in Parliament a Constitutional (Amendment) Bill, which unlike the promised omnibus bill, addresses only one issue, and not age limits but land. As explained by the Deputy Attorney General, the amendment will enable the compulsory acquisition of land for “development” with government compensating private land owners and taking over the land immediately, thereby circumventing what is now a lengthy process of negotiation over what compensation is due. This proposed amendment is extremely controversial in its own right, which explains why it has remained stalled on the government’s to-do list since the 1990s. What’s more, the government has by no means given up on its aim to introduce an omnibus bill. The Deputy AG made it clear that the much-awaited bill, containing an amended Article 102(b) on the age limit, will come to parliament later this year.

[1] This comes after last year’s election results were hotly contested amidst allegations of rigging. A 2017 Afrobarometer survey, moreover, had 75 percent of respondents declaring they would prefer to see presidential age limits maintained.

[2] Such astronomical payouts seem unlikely to materialise, although some form of bribe-for-votes will be necessary. And this despite the NRM Chief Whip’s strident claims that, “You can’t survive if you approach me to say I give you money to do your work to which [sic] you were elected. […] You imagine, unless this is something else not parliament, to approach the chief whip and say, ‘unless you give this much – Shs300m for us – we’re not going to Kyankwanzi [location of NRM Caucus retreats]’. How?! How can you tell me such nonsense? It is criminal, it is illegal, it is unethical, it is unwise.” The Office of the Chief Whip is known to routinely dole out money, however, making these principled objections somewhat less credible.

[3] Beyond Uganda, the push to strip away any remaining fetters on presidential power fits in with a regional trend. Rwanda recently scrapped constitutional term limits for President Paul Kagame. An NRM delegation more recently went on a fact-finding mission to Burundi where President Pierre Nkurunziza’s ill-fated efforts to circumvent term limits led to a spike in violence, adding to the number of internally displaced people and refugees. In a kind of authoritarian-style “benchmarking” exercise, the aim of the NRM delegation was to learn from Nkurunziza’s mistakes and to avert a similar outcome in Uganda.

[5] Langston Hughes poem, Harlem (“What happens to a dream deferred?)