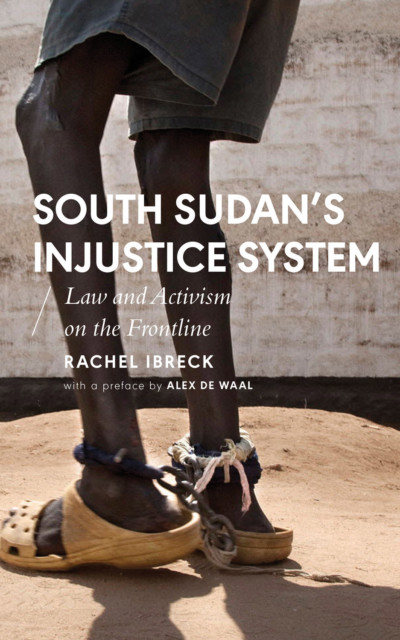 In the shadows of war, law and justice prevail in South Sudan. Legal activists are, as shown by Rachel Ibreck, creatively harnessing eclectic laws and cultural resources, and act as intermediaries between multiple political authorities and jurisdictions.

South Sudan is notorious for its wars and corruption, but people in the world’s newest ‘fragile’ state also have social and legal resources and aspirations for change. My book South Sudan’s Injustice System: Law and Activism on the Frontline argues that the law is central to the problem and legal activism must be part of the solution to Africa’s multi-layered conflicts. Violent conflicts are being fought and fuelled in prisons and courts, not only on battlefields. South Sudanese lawyers, paralegals and citizen activists, and some chiefs and judges are using the law in routine efforts to prevent or remedy manifold violations, including arbitrary detentions, abuses of women’s rights, and land grabs. They are constrained by political turbulence, and they work, mostly voluntarily, under constant threat of violence and displacement. Yet this vernacular legal activism is incrementally counteracting hegemonic disorder and injustice; and laying the foundations for legal and political change from below.

The contested rules of law

It is a misconception that South Sudan is ‘lawless’, instead there are plural and contested rules of law. There are the new nation’s statutory ‘laws on paper’. There are authoritarian legal practices inherited from Sudan. There are imported humanitarian and human rights laws referenced by the international organisations whose spending and service delivery far exceeds those of the national budget and institutions. Most importantly, there are tenacious, transparent, and socially-valued customary courts, which handle the vast majority of complaints in both civil and criminal cases, exceeding their jurisdiction where statutory courts are inaccessible or non-existent.

It matters that even in the midst of an atrocious civil war people still turn to courts, in efforts to solve all manner of disputes peacefully. We know what happens to their cases, thanks to the labour of twenty activists, involved in the participatory action research that underpins the book: they documented more than 600 statutory and customary courts in seven government-held towns in 2015-2016, providing court records that are otherwise missing or sparse. The court observers were also among eighty interviewees whose life histories taught me about the resilient logics of practice that govern South Sudan and the possibilities for leveraging power at the margins.

In this complex legal, socio-cultural and political terrain, the book argues, mustering power depends on access to military force, money, social connections and mastering the ‘game of the rules’. South Sudan’s ‘gun class’ mostly rely on ‘kleptocracy’ and violence, and rule with impunity, but they also make claims to legality and use legal instruments to repress and manage the population and to negotiate and transact with international agencies and investors.

Law as the frontline

Lawyers and activists are on the frontline of lawfare. Take for instance the National Security Service (NSS) Act of 2015, passed under the shadow of war. It awarded the security agency ‘unfettered’ powers of arrest and detention, and entrenched the power of the government to target and suppress suspected ‘rebels’ and to silence civilian critics. NSS agents stand accused of all manner of human rights abuses, including kidnapping two government critics in exile in Kenya and, the evidence suggests, executing them in South Sudan. One of the two was a human rights lawyer Dong Samuel, who contributed to the much-publicised Sentry exposé of corruption. Less well known, is the arrest and prolonged detention of a legal activist from Western Equatoria, who participated in our research project under the pseudonym of Isaac. He was trying to respond to routine human rights violations in and around his hometown but was arrested and detained in the notorious ‘blue house’ detention centre in Juba, without charge. He was released in October 2018, after several months in appalling conditions with a warning (which he refused to heed) to stop working for human rights.

Isaac’s story is in some ways unique, but all activists experience threats, displacement and precarity. What they also have in common – which helps to explain their agency in the legal sphere – is the combination of a secondary or tertiary education (in a country where the majority are illiterate); personal experiences of violations by state authorities or legal instruments; and heterogeneous social and cultural capital, based on their familiarity with the diverse authorities and laws that govern South Sudan’s fragmented state. They come from various localities and ethnic backgrounds but are committed to finding legal means to challenge injustices in their communities, despite personal risks. This is a pragmatic endeavour, inching towards political transformation ‘from below’, as one paralegal expressed it: ‘We are ever calling for peace: but peace will not come when we don’t make it.’ In the words of another: ‘We will make positive things…[but] this will not come in a short time or free of charge.’

The art of convivial legal activism

The legal activists whose struggles feature in the book lack economic resources; they respond at the micro-level and, in this unstable militarized environment, any achievements are vulnerable to reversal. But their ideas and practices illuminate the art of the possible.

We already know the power of transactional patronage networks in postcolonial contexts where political institutions are facades for extractive economics and politics has become a ‘marketplace’. In contrast, South Sudan’s legal activists incorporate what Francis Nyamnjoh calls ‘conviviality’, relying upon social networks and negotiations in response to pervasive uncertainty, violence, and social interdependencies. They creatively harness eclectic laws and cultural resources, and act as intermediaries between multiple political authorities and jurisdictions. They adopt a modest ‘right approach’ to forge relationships across South Sudan’s political divisions, cultivating allies within and beyond their local communities. And they appeal to good people in influential positions, even within the notorious National Security Service, at the heart of ‘the system.’

South Sudan’s ‘legal politics’, courts and activists demonstrate the persistent power of law and in a war zone. They instruct us in the durability of authoritarian colonial ‘rule by law’ regimes that licenced political elites to rule with impunity, and segregated and reconfigured customary regimes of law, regulating ‘native subjects’. They also reveal inventive socio-legal practices and struggles for justice from below, reminding us that law is always and everywhere more than a tool of power; it is also as John Comaroff puts it: ‘the ground on which to unravel the workings of power’. At a minimum, the inventive practice of convivial legal activism upholds dignity and minimizes some injustices. With time and support, it just might prove a subversive force.

Rachel Ibreck is a lecturer in Politics and International Relations at Goldsmiths, University of London.