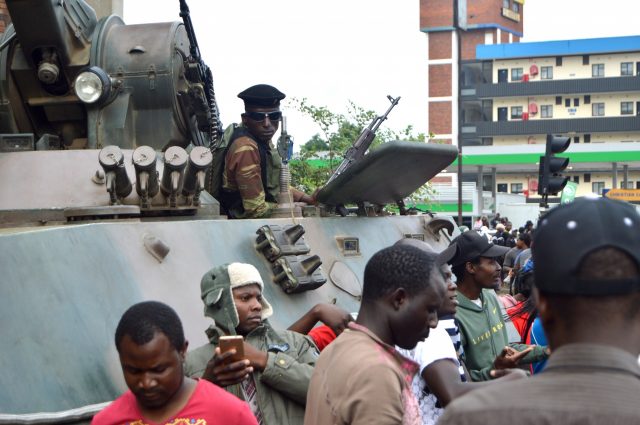 In this article, Maggie Dwyer look at mutinies in Africa from those that were involved – essential reading in view of recent events in Zimbabwe, and the continued high profile role of the military in Africa.

The year 2017 saw a series of actions taken by African militaries that extend far beyond their official roles. In January, hundreds of soldiers in Cote d’Ivoire took to the streets, barricaded cities, and held senior officials hostage over various grievances, including pay. Over the summer, Cameroonian soldiers abandoned their posts and later blocked major roads to express complaints over the Boko Haram mission. Most recently, senior ranks of the Zimbabwean military orchestrated the removal of Robert Mugabe after thirty-seven years in power. These events demonstrate the varied and complex ways that militaries in Africa make their voices heard and continue to influence the political landscape on the continent.

My new book, Soldiers in Revolt: Army mutinies in Africa, explores an often-overlooked form of military rebellion in Africa: the mutiny. By definition, mutiny involves mass insubordination for goals other than political control of the state. The action usually involves the most junior ranks and is used by soldiers to make demands to military and political leadership.

Militaries are founded on a structure of discipline and hierarchy. When junior ranks revolt against their seniors it is often seen as a challenge to the very essence of the military system. As a result, it is treated as a serious offense by militaries anywhere. One needs only to look at Nigeria and the death penalty for 54 mutineers in 2014 to see the high risk that soldiers take when engaging in a mutiny. Mutinies can be tense, dramatic, and dangerous, but they can also be highly revealing. When soldiers mutiny, they provide insight into life in the military, which is often hidden from outsiders. Through these moments of revolt, we can gain insight into how soldiers view their role and conditions as well as their expectations.

For a variety of reasons, including methodological challenges, this view of life within the rank and file has often been absent in studies of African militaries. This is a significant oversight as rank and file make up the bulk of most African militaries. They are at the forefront of state security and increasingly international security with the rise in peacekeeping and other multinational missions such as counterterrorism. Therefore, understanding the perspective of rank and file is key to understanding how militaries function or at times how they fail to function effectively.

Through extensive interviews with former mutineers in The Gambia, Sierra Leone and Burkina Faso, the book provides the viewpoint of mutinies from those that were involved. The research also involved examination of dozens of incidents of mutiny across West and Central Africa from 1960 to 2014. In doing so, Soldiers in Revolt, explores mutiny as a recurring phenomenon. The consistent use of mutiny throughout the region indicates that the action is not limited to personal disagreements between individual officers and their subordinates. Instead, the book situates mutinies in the growing tensions and divisions between the ranks, which often have roots in the political role that militaries have played in African states.

By examining revolts across time, Soldiers in Revolt demonstrates the ways that mutinies are often closely linked to political trends, both domestically and internationally. For example, the research finds that mutinies often occur around the same time as mass civilian protests. It shows how mutineers regularly incorporate popular political messages into their public statements and seem inspired by wider political trends seen in the civilian sector.

The book also reveals that the increase in African participation in international peacekeeping has also led to a series of peacekeeping related mutinies. Interviews with peacekeeping mutineers and public statements during the revolts show the ways that these types of missions often alter the expectations of soldiers and in some cases lead to increased dissatisfaction.

The study of mutinies outside the African continent have primarily focused on wartime mutinies and are often the work of military historians or those in war studies departments. Yet in a contemporary African context, mutinies are typically occurring in populated city centres, in times of peace and war, and with effects that extend far beyond the military realm. These types of revolts have challenged leadership, spurred social unrest, led to mass civilian casualties, threatened international peacekeeping efforts and resulted in international interventions. Therefore, exploring mutinies can be of value of anyone interested in further understanding the complex role soldiers have played in shaping the dynamics in modern African states.

Maggie Dwyer is a Research Fellow at the Centre of African Studies, University of Edinburgh. She is on Twitter at @MagDwyer. Soldiers in Revolt is can be purchased from Hurst or on Amazon. It will be available in the United States in February 2018 through Oxford University Press.