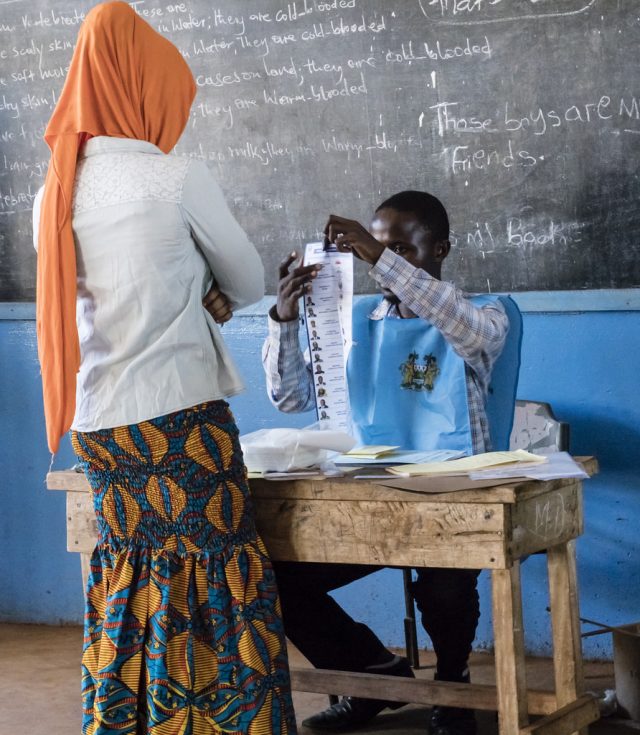 Will the conduct of regular elections in Sierra Leone translate into improved governance? Mohamed Sesay argues that although it may not, there is no doubt that peaceful transfer of power is being institutionalized.

On 7 March 2018, Sierra Leoneans voted in presidential, parliamentary, and local council elections to provide a five-year mandate to their political leaders. The elections were so highly contested that the National Electoral Commission (NEC) had to invoke Section 42(2) of the national constitution which calls for a run-off presidential election when the leading candidate fails to attain 55% of the total votes. In the run-off, held on 31 March, the opposition Sierra Leone People’s Party (SLPP) defeated the ruling All People’s Congress (APC) which had been in power since 2007. Although the ruling party is disputing the run-off results which gave the SLPP about 52% lead, outgoing President Ernest Bai Koroma has peacefully transferred executive power to the newly elected Julius Maada Bio, a retired Brigadier and junta leader who was central to the restoration of constitutional order in Sierra Leone in 1996.

For some, these elections have been regarded as another indication that Sierra Leone is consolidating its democratization and peacebuilding processes following the end of a decade-long civil war in 2002. Yet, others have warned that regular elections have become a façade to mask the reproduction of underlying structural problems such as socioeconomic inequality, institutionalised corruption, tribalism, and exclusionary politics. Often obscured in this debate though are the manifest democratic strides which Sierra Leone has made in the past 15 years.

The 2018 elections were crucial. The ruling APC party had been in power for two five-year terms. It faced a formidable opposition from its long-standing rival SLPP, as well as new political parties such as the National Grand Coalition (NGC) and the Coalition for Change (C4C). The elections were therefore a “do or die” affair: the APC was poised to maintain its grip on power while opposition parties capitalized on social resentment in the country stemming from the economic downturn, the 2014 Ebola outbreak, and 2017 mudslide/flooding disasters. As a result, the Office of National Security raised the level of security threat to Level-2 and the Sierra Leone Police imposed restrictions on vehicular movement during the polls.

The process was not entirely free from irregularities and malpractices, some related to fraudulent efforts to influence the results. In the first round of voting, the NEC recounted ballots of 154 polling stations and excluded the results of 221 polling stations where over-voting took place (i.e. the number of votes on the election day exceeded the number of registered voters).

Two days before the run-off, the High Court of Sierra Leone slammed an injunction on the electoral process. Whereas Maada Bio was sworn in as President less than 2 hours after the run-off results were announced, APC flagbearer Samura Kamara vowed to dispute the results through legal action. Alongside this, there have been incidents of violent attacks and vandalism in some parts of the country, including localized political clashes exploited by jobless miscreants.

However, both local and international observers concluded that the elections were largely peaceful and credible. Since the war ended in 2002, this is the second time an incumbent party has lost an election, followed by a peaceful transfer of power to the opposition. The 2007 elections which brought the outgoing APC government to power were organized just after the withdrawal of a massive contingent of UN peacekeepers – and yet, the then ruling SLPP conceded defeat. As the SLPP again takes over from the APC, there is no doubt that peaceful constitutional transfer of power is gradually becoming a norm in Sierra Leone.

As democratic consolidation continues, political actors are turning to established institutional structures rather than violence as the appropriate redress mechanism for electoral disputes. For example, although the judiciary and law enforcement agencies lack real independence to professionally carry out their functions, the courts are increasingly becoming the forum for disputing election results. When the High Court declared an interim injunction, it appeared the ruling APC was using legal instruments to influence a political contest, particularly when it turned out that the complainant Ibrahim Sorie Koroma was an active member of the party. But conducting political contestations within established institutional structures is preferable to resorting to violence. This is particularly in the context of a country with a long history of single-party dictatorship, military coups, and armed violence which ended only 15 years ago.

Yet, the highly contested elections also indicated that political intolerance based on ethno-regional cleavages remains rife in Sierra Leone. Often using mobilisation strategies based on ethnicity, the APC tended to appeal to its stronghold in the northern region while the SLPP fomented ethno-regional consciousness in the south-east. This trend was mirrored for new political parties, for example the NGC made inroads only in the north where its leader Kandeh Kolleh Yumkella hailed from, just as the C4C emerged as a Kono-based party.

At the same time, a closer look at the voting pattern reveals that Sierra Leoneans are interested in broad socio-economic and political issues which transcend ethno-regional boundaries. For example, the SLPP received approximately 15% of the total votes cast in the north during the run-off elections because its message of socioeconomic change resonated with poor northerners. Similarly, the opposition garnered 40% of votes in the Western Area, a region which was overwhelmingly dominated by the ruling party in previous elections. Such results may not be unconnected to worsening conditions in the urban centre, compounded by recent disasters such as the mudslide and flooding in Freetown. That these issues influenced the voting choice of Sierra Leoneans shows that the country’s political culture is changing from identity- to issue-based politics. While welcoming the SLPP back to power, voters have wasted no time to warn the new government that it will be shown the exit door if it fails to improve their socio-economic conditions in the next five years.

Whether the conduct of regular elections is translating into improved governance in Sierra Leone remains an open question. But no one can dispute the fact that peaceful transfer of power is being institutionalized, thereby reducing the risk of violence being considered as politics by other means. With voter turnout at 85%, the public strongly believes that its leaders need to seek political mandate through the ballot box. The 2018 elections must also caution politicians not to take the electorate for granted. Although partisan ethno-regional affiliation is still entrenched, voters are increasingly asking politicians to perform if they want their mandates to be renewed. As such, Sierra Leone is another example of the emergence of a regional West African norm, with ruling parties being voted out of power in Liberia, Ghana, Nigeria, and The Gambia.

Dr. Mohamed Sesay is a post-doctoral fellow with the Yan P. Lin Centre for the Study of Freedom and Global Orders in the Modern and Ancient Worlds, McGill University. His research focuses on transitional justice and post-conflict reconstruction in Africa.