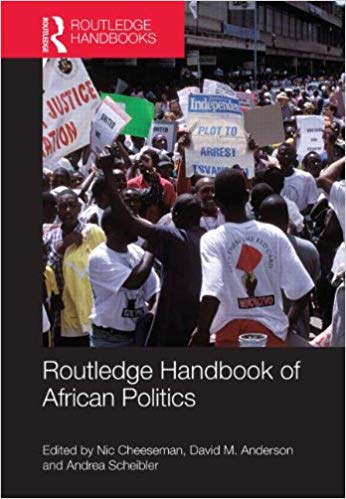 In this blog, Andrea Scheibler tells us about the Routledge Handbook of African Politics – new in paperback – that she has edited with our Co-editor Dr Nic Cheeseman, and Prof  David Anderson. Andrea is a DPhil candidate in African History at the University of Oxford, and a member of St Hugh’s College. You can enter a draw to win a copy of the handbook by re-tweeting one of our tweets about the book.

The Routledge Handbook of African Politics, out in paperback last month, is the product of a collaboration between 35 established and emerging Africanist academics. Three years in the making, the Handbook is arguably the most comprehensive overview of African politics currently available on the market and we hope it will become a standard reference book for students seeking to understand the development of, and transitions within, contemporary Africa.