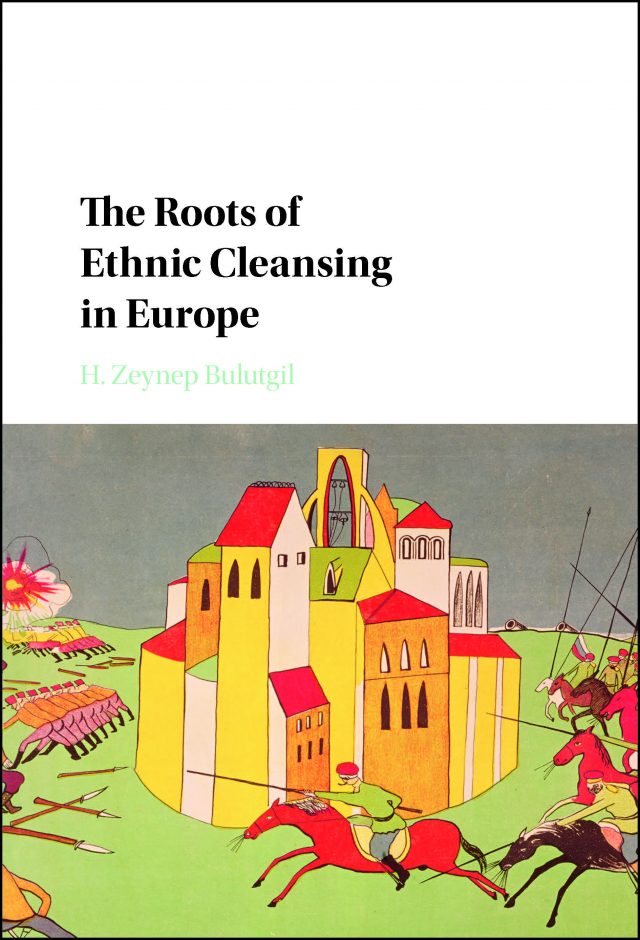 How do democratic institutions prevent mass ethnic violence? What are the implications for Mass Ethnic Violence in Africa and Preventing Ethnic Cleansing? H. Zeynep Bulutgil explores these questions in her book, Roots of Ethnic Cleansing in Europe (Cambridge University Press, 2018), which won the Best Book Award in the European Politics and Society Section of the American Political Science Association, 2017.

In the 20th century, tens of millions of people in Europe became victims of deportations and massacres targeting specific ethnic groups. Ethnic cleansing is neither exclusively European nor does it belong to the past. Examples from Rwanda, Sudan, and more recently Myanmar attest to the ongoing importance of understanding this phenomenon.

While writing this book, I made a conscious effort to “read history forward, adopting an ex ante rather than hindsight approach.” When studying the sequence of events in countries that eventually experienced ethnic cleansing, I constantly asked myself what other counterfactual paths were available at the time and why these paths failed to materialize.  At the end of this exercise, I was stuck by two observations. First, the political debates in the multi-ethnic societies of the Balkans and Central Europe, which have a reputation for having antagonistic ethnic relations, were usually not about ethnicity but rather about other issues such as economic or religious policy. Often these nonethnic concerns resulted in cross-ethnic political coalitions. Second, I was also stuck by how in the context of wars, ethnic divisions came to dominate over other concerns that typically populate the political space in peacetime.

Departing from these observations, The Roots of Ethnic Cleansing in Europe makes a two-pillared argument. First, in multiethnic contexts, there are often prominent nonethnic cleavages that result in factions that cooperate with other groups and resist ethnic cleansing. Second, territorial wars have a profound impact on the balance between ethnic groups that they do not have over other groups. Specifically, experiences in wars, such as political or military promotion of ethnic minorities, boost the relative strength of factions within dominant groups that favor ethnic cleansing.

I provide a variety of empirical evidence from 20th century Europe. I find that ethnic minorities in countries with less competitive systems or weaker class-based parties were more than ten times more likely to be victims of ethnic cleansing.  Furthermore, those minority ethnic groups that experienced political promotion during wars were some seventy times more likely to be targeted with ethnic cleansing than other groups. Historical cases in the book such as interwar-Czechoslovakia, interwar Poland, and the Ottoman Empire also provide a sense of how cross-ethnic coalitions that exist during peacetime get dismantled during wars.

Additionally, my book and related article show that in contexts such as Austro-Hungary and Russia during WWI, political parties that focused on nonethnic cleavages prevented or reversed the decision to use ethnic cleansing. The politics of these empires during WWI stand in contrast to that of the Ottoman Empire, where the liberal political faction open to minority collaboration had lost political relevance after the Balkan Wars in 1912-1913.

The lack of salient nonethnic cleavages can also explain why extreme nationalists sometimes come to power before wars. In Bosnia, the nationalists came to power in November 1990 elections and the ethnic cleansing campaign started immediately after the beginning of the civil war in 1992.  Using existing data and fieldwork, I show that explanations that depict interethnic relations in Bosnia as antagonistic due to historical memory do not pass empirical scrutiny. Instead, the quick descend to ethnic cleansing was an unintended consequence of communist policies. After forty-five years of communist rule, alternative cleavages that could result in cross-ethnic coalitions such as class or religious-secular divisions had largely disappeared. This setup gave a distinct advantage to the nationalist parties in the first post-communist elections and made it difficult to avoid civil war and ethnic cleansing.

The book has notable implications for Africa. First, recent research on African countries suggests that cross-cutting cleavages also serve as barriers against mass ethnic violence in this context. This research shows that during the civil war in Ivory Coast, divisions within the Christian southerners and connections to Muslim northerners made genocide against the latter unlikely. Similarly, in Mali, the everyday practice of “cousinage ties”  between clans and ethnic groups helped avoid a genocidal outcome.

Second, The Roots of Ethnic Cleansing identifies and accounts for a puzzling observation about post-imperial Europe and Africa: ethnic cleansing has been much less common in post-colonial Africa compared to Central and Eastern Europe in the period that followed the collapse of multi-national empires. As I argue in the book, this observation can be explained by the relative absence of territorial wars in Africa, a trend that has been highlighted by other scholars.

The main policy implication of the book relates to the potential role of democratic institutions in preventing mass ethnic violence. My findings suggest that institutional arrangements that allow for competition among multiple political parties, even when they do not fulfill all the procedural requirements for democracy, could decrease the likelihood of ethnic cleansing. Yet this outcome would only be possible if the political system includes influential political parties that emphasize identity categories other than ethnicity.  From this perspective, it becomes easier to understand why the introduction of competitive political systems in contexts such as Iraq has thus far not prevented, perhaps even fueled, ethnic violence.

H. Zeynep Bulutgil will join the Department of Political Science at University College London as a Lecturer in International Relations in September 2018. She has previously taught at Tufts University.