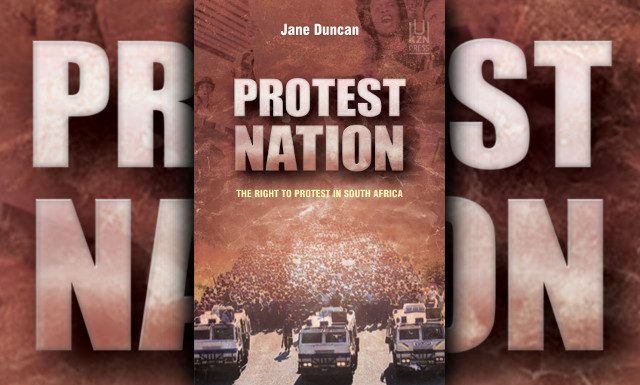 As 2019 draws to a close, Jane Duncan reviews subtle measures employed by countries like South Africa to limit protests. Read more about how governments are turning the democratic right to protest into a security threat.

The year is coming to a close, and it has seen some massive upheavals. Protests have erupted in many countries and regions of the world, including Lebanon, Hong Kong, Algeria, Catalonia, Chile, Sudan and France. Although they are diverse in terms of composition, character and ideology, what unites them is that they are part of a longer term wave of protests that escalated after the 2008 global recession and subsequent spread of austerity. The fact that this wave has been sustained over the past decade attests to its world-historic significance.

Yet, at the same time, governments have responded with increasing intolerance, and many have resorted to openly repressive, militarised policing. Those that cannot afford to engage in open repression – as they risk escalating rather than discouraging the protests – have preferred more preemptive, intelligence-led methods to target protest leaders and disassemble protests even before they take place. Increasingly bureaucratised notification procedures have become popular tools used by the police and local governments either to produce non-disruptive, unthreatening protests, or prevent them from happening all together.

South Africa, a protest hotspot, has perfected the art of preemptively restricting protests. My 2016 book, ‘Protest Nation: The Right to Protest in South Africa’, documented some municipal practices in this regard in eleven municipalities around the country. This book examined assemblies and protests shortly after the recession took hold, and found that the protests manifested some elements of an organic crisis faced by the ruling hegemonic bloc and led by the African National Congress (ANC). These protests brought new political actors out onto the streets, outside of the ANC alliance, they were sustained for lengthy periods, they took place in multiple protest sites despite there being no national organisation to generalise their demands, and the state lacked the capacity either to repress them or to offer genuine concessions to them. It is no small wonder the information gathered by the South African History Archives (SAHA) in association with the Legal Resources Centre (LRC) after my book was published points to a bureaucratic explosion around the regulation of protests. Local governments have used the purported upsurge in violent protests to impose myriad conditions on the right, in spite of the fact that while violent protests are on the rise, the extent of violent protests is vastly overstated to justify increasingly securitised state responses. In fact, the majority of protests in South Africa remain peaceful, but this is not well appreciated as it is the violent protests that receive inordinate media and government attention.

Legally, the South African constitution recognises the right to assemble, demonstrate and picket peacefully and unarmed, which is regulated in terms of the Regulation of Gatherings Act. Furthermore, the constitution protects disruption, providing it is peaceful and unarmed, and the Act draws the line at serious disruption. Yet, apart from the legal position, there is also the political reality that the government often does not take non-disruptive protests seriously, and that historically, disruption in the form of strikes and mass protests that bring unjust and unequal systems to a grinding halt, are effective tools of the working-class movements to shift power. Much of the academic literature also points to these tactics being ones of last resort, when more conventional modes of engagement have failed. But this evidence has not stopped the government from capitalising on moral panics about violent protests, to justify more preemptive restrictions that move far beyond what the constitution and even the Act allows for. Consequently, having been a trend-setter in respecting the right to protests, South Africa is increasingly at odds with international standards around the proper management of assemblies within a human rights framework.

There is copious evidence of municipalities misusing what they perceive (often incorrectly) to be their powers, and placing intolerable obstacles in the way of protestors. This obstructive behaviour is unsurprising, as municipalities experience intolerable conflicts of interest in making decisions about protests in terms of the Act. This is because they are both player, being a target of protests against their own performance, and referee, where they generally have to perform the function of responsible officer. As a result, the temptation for them to manipulate the notification process and place unjustifiable conditions on the right to protest, is great.

For instance, several municipalities have required conveners to seek a letter from the institution or person they were marching against, guaranteeing that they would be willing to accept the memorandum. This requirement makes these protests subject to a veto by the very person who is the target of the protest. Others charge an administrative fee for notices, making the right to protest subject to financial means. More municipalities are also regulating gatherings and especially protests in ways that are not content-neutral, requiring protestors to provide detailed information of what is going to be written on their placards, who is going to be speaking and for how long (complete with identity and phone numbers), and forbid protests on contentious issues that fall short of hate speech or incitement to imminent violence. Protests have also been prohibited on grounds that are not recognised by the Act, leading to their criminalisation. These practices are uneven, though in some municipalities, the bureaucratic layer exercised relative independence from the political layer, and take administrative decisions about protests.

However, strategic litigation combined with activism are gradually limiting the scope for abuses. In a groundbreaking 2018 Constitutional Court judgement precipitated by a Social Justice Coalition (SJC) protest at which protestors were arrested, the Court found that the criminalisation of protest conveners for the mere failure to give notice was unconstitutional. This should go a long way in preventing municipal and police abuses of the notification process. Yet, despite this victory, there is little evidence that the judgement is preventing abusive state practices in regulating and policing gatherings. On the contrary, the SJC success may well drive them towards using even more pre-emptive restrictions on gatherings and nebulous, ill-framed charges that are more difficult to challenge. These practices are consistent with a global doctrinal shift in how gatherings are viewed by political elites. In more expansionary periods, they were willing to concede the protests as an essential part of democratic expression and negotiate the management of protests. In this recessionary period, though, they are more likely to criminalise protests, and frame protestors as security threats, and even cast domestic instability as a national security issue, mandating the attention of the most secretive and repressive powers of the state.

Once protests are criminalised, then public violence and illegal gatherings are the most commonly used ‘assembly offences’ used by the police and prosecutors. Prominent activists who are considered ‘troublemakers’ are more likely to be targeted by the police, whether they were directly involved in the violence or not. In some cases, the police conduct dragnet arrests, scooping up large numbers of protestors on the pretext of public violence, whether or not there were clear grounds for arrest. In fact, public violence can become a nebulous, catch-all charge, and the police may even change charges depending on which ones have the greatest chances of success. Lengthy police detentions can be (and have been) used as forms of punishment rather than as preventative measures to ensure public safety. Charges may be left deliberately unclear, making it impossible for the activists’ legal representatives to prepare adequately. Prosecutors have also been known to apply for postponement after postponement, claiming that their cases are not ready, leading to protestors being tied up in court appearances for months, only for the charges to be dropped for lack of evidence. Prosecutors may also be too busy to question the integrity of police evidence, or they may actively facilitate the police strategy to keep the activists behind bars by any means necessary.

Overbroad limitations on the right to protest are not confined to public spaces. As struggles over the affordability of higher education spread across university campuses from 2015 onward, universities sought and were granted wide-ranging interdicts that prohibited disruptive protests despite the Act setting the bar for police intervention at serious disruption. On several campuses, inappropriately trained private security guards ‘policed’ protests, in spite of the fact that according to the Private Security Regulatory Industry of South Africa (PSIRA), their members were not trained adequately in crowd control, their mandate was not meant to extend to these functions, some of their members armed themselves in ways they were not meant to, and some universities even employed private security firms that were not their members (an unlawful act).

In spite of, or perhaps because of, the fact that protests are erupting all over the world and have the potential to shake the foundations of the current social order, the hard-won right to protest is under unprecedented threat. South Africa is no exception. Researchers and activists have both a duty and historic opportunity to document abuses of this right, and inform campaigns that defend and extend this right to one that becomes a true challenge to the authoritarian disaster capitalism that threatens humanity’s very existence.

Jane Duncan is a professor in the Department of Journalism, Film and Television, School of Communication at University of Johannesburg. Her recent book is ‘Stopping the Spies: Constructing and Resisting the Surveillance State in South Africa’  (2018).