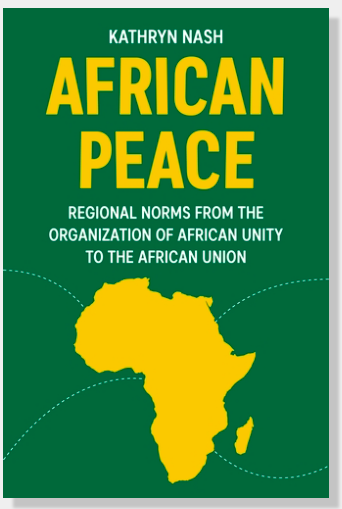 The global order is constantly evolving, and more recent debates about the nature of this change have highlighted the ascendency of emerging powers as well as the potential of other types of actors to shape global norms, practices, and dynamics.  However, we must also look back to understand how actors beyond major powers have shaped and continue to shape regional and global governance.

My new book – African Peace: Regional Norms from the Organization of African Unity to the African Union – examines how peace and security norms and practices in Africa were created and evolved. The central question is why did the Organization of African Unity (OAU) choose a set of norms at its creation in 1963 that led to a conflict management policy of non-interference and why did the African Union (AU) chose a very different set of norms in the early 2000s that led to a more proactive and institutionalized conflict management policy.  The book draws on archival evidence collected from the AU Commission Archives, and it illuminates not only the process of norm creation and change in Africa but raises questions about the role of regional organizations in both regional and global governance.

The creation of norms in African regional organizations

At the OAU founding conference in May 1963, there were debates about the priorities of the new regional organization.  Ghanaian President Nkrumah advocated for a political and economic union that would have necessitated independent African states ceding some sovereignty in order to pool resources and have common policies.  However, this vision was not widely supported by other leaders who were wary of external interference from both inside and outside Africa.  Instead, the leaders at the OAU founding conference concentrated on areas of agreement that included a commitment to the liberation of the continent, protecting independent African states, and advocating for a place for Africa in world affairs.

These priorities that were shaped by interpretations of pan-Africanist ideas and regional interests resulted in OAU norms that largely promoted state security, including non-interference in the internal affairs of member states and promoting sovereignty and territorial integrity, and they underpinned a conflict management policy of non-interference. While these norms largely conformed to international norms at the time, African independence era leaders did not simply localize international norms.  Instead, they chose existing norms and adapted other norms in ways that would best protect independent African state sovereignty and security and de-legitimize colonial and white-minority states.

The institutions and policies that were supported by the OAU reinforced these norms in the early decades of the organization.  The OAU peace and security policy was largely ad hoc and did not interfere in internal conflicts.  The OAU did create the Commission of Mediation, Conciliation, and Arbitration.  However, it was chronically underfunded, and the protocol establishing the Commission only gave it jurisdiction over conflicts between states when both states agreed to its intercession. Institutions that received more funding and political capital were the Liberation Committee and the African Group at the United Nations (UN).  The Liberation Committee was designed to support states still suffering under colonial or white-minority rule while the African Group provided a structure for African countries to negotiate with UN functional agencies and impact debates in the UN General Assembly.

However, as time went on, there were several conflicts and atrocities that threatened regional interests and resolve to uphold absolute state security and non-interference.  Notable examples include the Nigerian-Biafran civil war in the late 1960s, the atrocities of Uganda’s Amin, and the human rights abuses of Bokassa in Central African Empire.  There are of course other examples of conflicts and atrocities in Africa during this time, and the response from African states and the regional organization is uneven and inconsistent.  I highlight these examples because they led to pushback against the absolute protection of state security and sovereignty that indicates a slow dismantling of state security norms.

As state security norms were gradually challenged, there were concurrent indications of a shift in regional approaches to conflict management.  These indications include Nigeria’s efforts from 1979-1982 to end a civil war in Chad leading to Africa’s first multilateral peacekeeping mission and the consideration of a proposal to create an OAU Political Security Council in the early 1980s.  A formal report on the establishment of a Political Security Council was presented to the Council of Ministers in March 1981. The council would have been responsible for, “taking immediate and effective action to maintain peace and security, to prevent, as far as it lies in its power the escalation of political, military, and other conflict which threaten or is likely to threaten peace, security, and stability of the African continent”.[1]  While the proposal did not pass and never came to fruition during the tenure of the OAU, it was an attempt to reframe African capacity to address conflicts.

In the 1980s, the OAU undertook institutional fixes without changing its foundational norms.  However, transformative change did not happen at this juncture because the ideas that would underpin such a change were not fully developed. The ideas that underpinned the OAU were being discredited, but new ideas had to emerge to guide normative change before a new organization could emerge. The result was limited institutional reform that conformed to existing norms or failed attempts at reform that were seen throughout the 1980s and early 1990s with normative change occurring after the further development of ideas around human security and sovereignty as responsibility.

The norms that were ultimately adopted by a new regional organization after a multiple year transition from the OAU to the AU still upheld sovereignty but carved out exemptions while embracing a broader set of priorities that focused on the security of people instead of states. The shift began in the 1970s and culminated in the AU Constitutive Act that was negotiated beginning in 1999 and adopted in July 2000. Ultimately, the same factors that shaped the creation of OAU norms shaped the creation of AU norms – ideas, influenced regional interests, and coupled with advocacy by key leaders and the impact of critical events

My book specifically explores peace and security norms.  However, its broader aim is to contribute to an understanding of the role of regional organizations in shaping not only regional governance but influencing global governance.  The timeline of peace and security norm and policy development in Africa raises questions about the extent to which African regional practices may have influenced global practices in the early 1990s.  Furthermore, the AU is currently active in shaping the division of labor in peace and security amongst sub-regional, regional, and global bodies, so it is continuing to play a role in shaping regional and global conflict management.  The AU and other regional organizations are crucial in responding to complex crises that transcend borders, and I would argue we need far more research on how regional bodies, particularly those in the Global South, create norms and institutions and help to shape the global system.

Kathryn Nash is a Chancellor’s Fellow at the University of Edinburgh Law School.

Her book can be purchased here. It was developed during her time as a Postdoctoral Fellow at the Political Settlements Research Programme.

[1] “Report of the Secretary General on the Proposal for the Establishment of a Political Security Council” (Addis Ababa, Ethiopia: Organization of African Unity, February 23–March 1, 1981), African Union Commission.