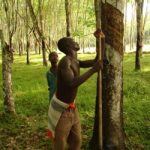 In this blog Marco Francescon highlights the opportunities and challenges that natural resource management present for post-conflict reconstruction in Liberia. Marco has just completed an MSC in African Studies at Oxford University.

Liberia’s historical experience with natural resource extraction, however, provides us with a cautionary tale. In a seminal book on Liberian history, Dr Amos Sawyer describes how foreign extractors providing revenue straight to central government encouraged the development of a highly centralized political system. This increased the stakes of political competition and meant that the ease with which groups in Liberia could be excluded from state benefits increased; both outcomes contributed to the political instability and civil war that subsequently plagued Liberia.

Following the civil war, Social Development Funds (SDFs) were added to contracts in the natural resource sector. This addition is a significant change that seeks to guarantee that the benefits of extraction are spread more widely across the Liberian citizenry. Funds are provided by companies directly to the communities affected by their operations, with the intention that these communities will use the funds for development projects. The aim is to compensate the communities for the impact that the activities of the companies have on their livelihoods.

When SDFs have been driven by the Liberian government, their institutional design has remained highly centralized. For example, the first SDF in operation, funded by the iron ore giant Arcelor Mittal, is governed at the national level by Ministers in the Sirleaf government who have ultimate say over how the funds are to be spent. It could be argued that there are advantages to this centralized system, such as allowing the Liberian government, which may be able to claim greater expertise in managing developmental projects than actors outside of government. This argument can also be strengthened by the fact that the government is spearheaded by Ellen Johnson Sirleaf, a figure who has regularly been commended by the international community for her leadership in Liberia and who was awarded the Nobel Peace Prize in 2011.

Nonetheless, there have been significant problems over the last few years with these SDFs, in particular with the highly centralized Arcelor Mittal Social Development Fund. Both the General Auditing Commission and local Liberian civil society organizations (such as the Sustainable Development Institute, which is associated with Friends of the Earth) have highlighted numerous examples where the funds available have been misspent. For example, $200,000 of the first $1,000,000 available from the fund in Grand Bassa County was spent on administrative costs, without the appropriate approval being granted for such spending. Additionally, in 2010, significant funds were used to prepare Nimba County for Independence Day celebrations, rather than being put towards development projects. Despite the misspending of the funds, no individuals have yet been held accountable.

The way in which the funds from these SDFs have been spent provides some useful insights for Liberia as it undertakes further institutional reform. Whilst it has entered a new post-war era, with greater political stability and a government that has pledged its commitment to building a robust democracy, overly centralized governance remains dangerous, particularly in the natural resource sector where so much is at stake socially, environmentally and financially. One such danger, as the management of SDFs demonstrate, is that intended beneficiaries are less able to hold those making decisions on how the funds are to be spent to account. It is extremely difficult for individuals from local communities with little legal representation, despite the best efforts of Liberian NGOs, to try to challenge individuals in central government for the decisions they make regarding the spending of the funds. However, were governance to be decentralized to individuals outside of central government, accountability mechanisms may well be strengthened by making it easier for the affected communities to successfully challenge any errant decision makers.

In short, whilst the benefits that Liberia could gain from natural resource extraction are huge, the appropriate structures must be created before these benefits are realised. Over the last few years, a major driver of the problems experienced with SDFs has been their over centralization, which has reduced the level of accountability that intended beneficiaries of the funds can expect to exercise. The Liberian government has achieved a significant amount since the end of civil war, in a difficult context. However, for the fledgling democracy to be strengthened it is crucial that future institutional engineering in the natural resource sector learns the lessons from the failures of these SDFs, in particular the weak accountability mechanisms that are the by-product of a highly centralized system.