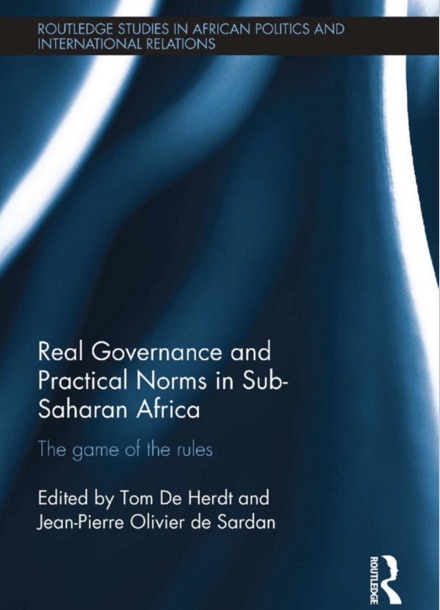 Tom De Herdt and Jean-Pierre Olivier de Sardan tell us about their latest book, which enables us to study how public institutions function in everyday life across Africa, without insinuating falling into the trap of seeing these practices in purely negative terms or as typically/uniquely ‘African’.

Tom De Herdt is Senior Lecturer in political and institutional aspects of development and Chair of the Institute of Development Policy and Management, University of Antwerp. Jean-Pierre Olivier de Sardan is Senior Researcher at LASDEL, Niamey, Niger, Professor of Anthropology at the Ecole des Hautes Etudes en Sciences Sociales in Marseilles, and Emeritus Director of Research at the Centre National de la Recherche Scientifique.

International development discourse acknowledges that the state is a crucial development actor. However, whether we focus on poverty reduction strategies, health provision, or taxation schemes, what you see on paper is usually not what you get in practice. Both social-science researchers and development practitioners recognize that in Africa a particularly significant discrepancy exists between the official norms of the state and the public services on the one hand, and the actual practices of political elites and civil servants on the other. Faced with this gap, many scholars in the past have relied more heavily on preconceived ideas than empirical study for understanding. The concepts that they have subsequently developed have tended to obfuscate rather than illuminate the issue.

In contrast, our attempt to understand the gap is to gain an in-depth empirical knowledge of the everyday life of state actors. The concept of ‘practical norms’ that we use to analyse the issue focuses rather than distracts from this empirical goal. Our book, ‘Real Governance and Practical Norms in sub-Saharan Africa’ argues that this approach will enable us to more effectively improve public service delivery across this diverse continent.

Writers on development have tended to take one of two routes once they realize the gap between what should officially happen and what does happen in practice. Some interpret the discrepancy as a sign of social disorder, describing the situation in terms of ‘poor governance’ or corruption. Implicitly or explicitly these narratives are comparing African states to their western counterparts. Where the gap between everyday reality and ideas of statehood emerging from the west is particularly vast, states are branded as ‘failing’ or ‘collapsing’, and leaving a ‘vacuum of authority’ in their midst (Rotberg 2003).

Others try to argue that apparent “social disorder” actually reflects an unavoidable clash between the modern, impersonal, bureaucratic ideals of western statehood and the logic of rule that has developed in Africa. These writers might use terms like ‘politics of the belly’, ‘imported state’ or ‘economy of affection’ or more neutral concepts such as ‘clientelism’ ‘informality’, and ‘neo-patrimonialism’. Their conclusion is that policies directed towards institutional change should “work with the grain” of putatively African logics of rule (Booth 2009).

Both perspectives concur that many social problems in Africa are rooted in governance issues. On this point we agree. We do not believe, however, that governance issues emerge from a lack of norms or the presence of cultural norms incompatible with a modern state administration. Such arguments are either entirely wrong or very partial and not generalizable.

If we want to promote institutional change, we must first empirically explore and understand the discrepancy between public norms and effective practices. What we find is not a lack of norms but an excess of them. These norms, however, do not have a peculiarly ‘African’ logic to them. To argue otherwise is to ignore the modernity and heterogeneity of real governance across the continent.

In reality, the landscape of African governance is composed of multiple dimensions; some of them convergent and others contradictory. Looking closer, we can see that these forms of governance emerge from local, sectorial and individual micro-dynamics and innovations. Some of these are ‘palliative’ answers to institutional failure or to situations where people face multiple, conflicting moral demands at once.

Over time, social order across the continent is permanently re-assembling itself out of a variety of logics and practices. However, none of this can be called typically or exclusively ‘African’.

As we engage with ‘practical norms’, our starting point is the local realities and everyday lives of public officials. Our book demonstrates that practical norms tend to complement, bypass and even contradict official norms. These are informal regulations and routine practices that are often taken for granted by people who engage with them. Unlike social norms, which are explicit and public, practical norms are latent and implicit.

For that reason, researchers who want to identify and understand practical norms need to engage in ethnographic research capable of capturing the complexity, variety, ambiguity and modernity of public agents as well as exploring how they change over time. Researchers must be able to ascertain whether officials’ behavioral patterns are strategic or simply habitual.

This, in turn, would allow us to imagine a different approach to development. Currently, development interventions and public policies tend to introduce new official norms or insist that existing norms be respected. A practical norms approach enables us to properly understand the full range of norms and practices in play prior to any intervention being made. It also pushes us to acknowledge both the positive and negative sides of real governance: Whilst some practical norms exacerbate poor public service delivery, others are palliative, facilitating some form of delivery in otherwise destitute settings.

To demonstrate the value of these concepts in practice, our book delves into multiple case studies: We explore how health personnel in Niger and South Africa develop practical norms to overcome the dilemmas of care-giving in an acutely underfinanced medical service; we see how the choices Senegalese forest guards are determined by too many, rather than too few, accountability mechanisms; we interrogate how human rights are given shape by the everyday practices of Ugandan prison guards; we hear about the practicality of “practical hybrids” in water governance in Zimbabwe; and we see how the Congolese state, reputed by its absence, is put to work in the gold sector and in peace courts. These case studies demonstrate the utility of studying real governance if we want to understand and improve public service delivery in Africa, and beyond.