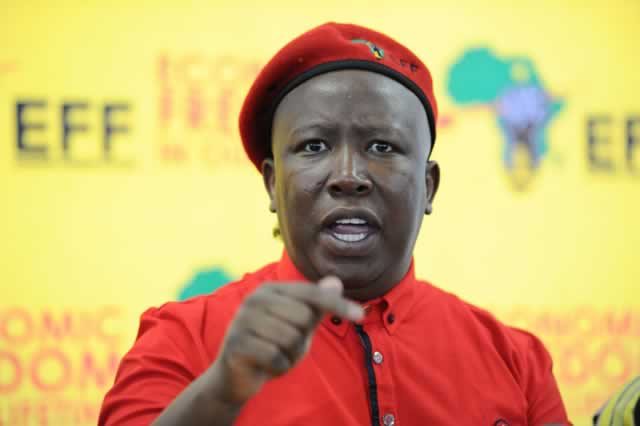 In this blog, Rachel Johnson makes the case for exploring disruptive performances in South Africa’s National Assembly. This approach can give us a new perspective on dominant party democracy in post-apartheid South Africa. Rachel is a lecturer in African History at the University of Durham.

In June 2014, media interest in the South African Parliament – an institution often ignored both in popular political discourse and academic analyses of South African politics – was reignited when a newcomer was judged to have broken the rules and was punished for it. In his maiden speech in the National Assembly, Julius Malema, Commander in Chief of the Economic Freedom Fighters and a newly elected Member of Parliament (MP), was accused of violating the boundaries of parliamentary discourse and was asked to withdraw his statement that the ANC had ‘massacred’ miners at Marikana. When challenged to withdraw his ‘un-parliamentary’ remarks by the chair of the National Assembly that day, he refused and was subsequently ordered to withdraw from the chamber. He took the rest of his loudly protesting party out with him. In a further, even more dramatic incident the National Assembly was suspended in August and members of the EFF – including Malema – were removed, following a confrontation during a session of Questions to the President. At the time of writing this blog, they are fighting their suspension over the incident.

Whilst attracting media attention, legislative protests such as those of Malema and the EFF have not usually been considered worthy of close analysis within conventional approaches to the study of parliamentary politics. Where it has been considered, disruption of this sort has tended to be viewed negatively- as a sign that the socialisation of MPs is failing (and thus institutional reproduction is in danger) and that efficient and rational political discourse has broken-down, bringing  representative political institutions into disrepute. However, legislative protest or disruption, enacted by MPs themselves as opposed to non-members, has more recently come to the attention of those developing performative approaches to the study of parliaments (see a Special Issue of Democratization on Disruptive Democracy). This emergent literature sees the specific registers (language, symbols) through which disruption is performed, the spaces which are used and created, and the boundaries that are challenged and made through rule-breaking as important ways of exploring the shifting cultural and historical practice of representative politics in specific contexts.

I have suggested that applying such an approach to disruptive performances with the South African National Assembly provides a different lens through which to examine some of the truisms of South African political analysis such as the notion of South Africa as a ‘dominant party democracy’. An analysis of the shifting patterns of punished disruptive behaviour (as opposed to tolerated disruptive practices) within the South Africa National Assembly provides an under-explored window onto the development of opposition politics in post-apartheid South Africa. Since 1994, the most common form of institutionally punished disruption in the National Assembly has been individual MPs disregarding the authority of the chair and subsequently being ordered to withdraw from the chamber for the rest of the day’s sitting. A basic outline of instances in which the chair has made use of their disciplinary powers can be gleaned from the Minutes and Proceedings of the National Assembly.  Between 1994 and 2010 there were twenty orders to withdraw from the chamber issued to individual MPs. Of these, all but one were men from opposition parties; the only woman ordered to withdraw was also the only member of the ANC asked to leave. The ostensible reason for the order to withdraw shifted over time – with an early predominance of refusal to withdraw un-parliamentary remarks giving way to conflict over the following of correct procedure and complaints of unfair use of disciplinary powers by the Speaker especially during the Third Parliament (2004-2009). The party affiliation of the MPs involved has changed too, with Afrikaner far right parties giving way to the main opposition Democratic Alliance as the party with the most MPs ordered to withdraw by 2010.

A performative approach to analysing these incidents using press reports, public statements by MPs involved, the Hansard record,and observations from the public gallery, suggests that two main types of disruptive performance (1994-2010) can be distinguished. The first, ‘performances of marginalization’ were mainly enacted by politicians of the far right Afrikaner Nationalist parties – these performances of disruption involved the MP portraying themselves as marginal to the mainstream of South African politics; as outsiders who were being literally forced out of parliament and, symbolically, the nation. Interestingly, the more recent disruption of Malema and the EFF, whilst being conducted in its own specific register also has echoes of these ‘marginalization’ performances. The second, ‘procedure as democracy’ aimed to portray the ostensible rule-breakers as more parliamentary and democratic than those enforcing the rules. These performances made visible what opposition parties, and especially the DA, frequently complained was an institutional power imbalance, in which the ANC utilised its majority within the National Assembly to act undemocratically. I have argued that these disruptions shed light on ‘dominant party democracy’ since it is in part through such performances that ANC dominance is made visible and brought into public discourse.

The presence and behaviour of the EFF has shifted the dynamics of the National Assembly this year and the rules of parliament are being challenged in ways not seen since the early years of the transition. After the order to withdraw in June, Malema said that he ‘was not here for rules of parliament. I am here for revolution’. The racial, gender and class dynamics of disruptive practices that are contesting the rules of the National Assembly are worthy of much greater consideration than this initial analysis offers and it is hoped further study may offer up fresh perspectives on democracy as a set of day-to-day practices in South Africa.