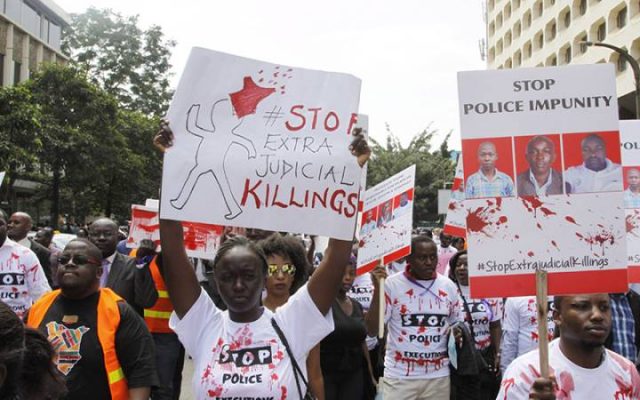 This year, the Kenya Police Service has been responsible for 267 extrajudicial killings. Is there any possibility of the police being held accountable for these murders? Leighann Spencer explains why justice for such cases is elusive in Kenya.

This year, the Kenya Police Service has been responsible for 267 extrajudicial killings. That is six deaths every week. With a recent tally of 24 in just three weeks, this issue has come to the forefront. Amid the widespread condemnation, the Independent Police Oversight Authority (IPOA) announced that it will be investigating the problem. But what is the likelihood of obtaining justice?

Extrajudicial killings by the Kenyan Police Service are not a new phenomenon. The Independent Medico Legal Unit (IMLU), which investigates police brutality, reported 152 deaths by the police in 2017. Over the four previous years, 612 people were killed. 2017 had been one of the worst years on recent records, with a spike during the presidential election. Many thought that there would be a decrease this year.

The disbandment of the notorious Flying Squad in January saw hope for change. Abundant abuse had been undertaken by this police unit mandated to deal with violent crime. However, as expressed by NGOs such as the IMLU, ‘disbandment’ was more likely a rebranding exercise due to their infamous reputation. The mandate still has to be performed; just as the Flying Squad was originally a rebranding of the Anti-Motor Vehicle Theft Unit, established in 1995 to combat car hijackings and armed robberies.

Certainly, as we can see from the 2018 statistics, the Kenyan Police Service has not changed its spots. The circumstances of killings have also remained consistent. IMLU details that Nairobi County police are the worst offenders, particularly in the city’s informal settlements. Victims are nearly always young males aged 18-24 years. They often have a criminal history. Nonetheless, they are rarely killed after a crime, only ‘on their way to commit a crime’. Cases are usually reported by the victim’s mother or wife, rather than officers.

There have been some instances of police being held to account for extrajudicial killings. In April this year, officer Titus ‘Katitu’ Musila was sentenced to 15 years imprisonment for the 2013 fatal shooting of Kenneth Kimani Mwangi in Githurai. This case was bought forth by IPOA. However, such convictions are rare. There are several reasons as to why, which were outlined by relevant NGOs in Kenya.

Firstly, it can be difficult to tell which branch is responsible. Specialised police units like the Flying Squad, or the National Intelligence Service which is shrouded in secrecy, may kill a suspected criminal and then leave the scene. The incident then falls back onto the local police once the body is found. Even with willing witnesses, the branches can be confusing. It can then be difficult to identify the specific member/s responsible. The Kenyan Police Service will often shuffle officers to different stations in times of controversy. They have gone to the extent of removing cartridges from the scene and bullets from their victims’ bodies, so that they cannot be traced. The IMLU is campaigning for all members to wear tagged numbers for identification to combat these issues.

Secondly, investigations are problematic. For instance, if bullets or cartridges are found, these must be sent to the ballistics department. But this department is inefficient, lacking experts and resources alike other forensic departments. Furthermore, as part of the Kenyan Police Service, this is fundamentally police investigating police. The same can be said about the Internal Affairs Unit, launched last week. Located within the police, this will receive and investigate complaints, to be overseen by IPOA. Little difference to the existing model is yet to be seen. Rather, as Kenyan NGOs are campaigning for, the National Coroner Services Bill should be implemented, which outlines how killings must be investigated.

The willingness of witnesses to come forward is another problem when investigating extrajudicial killings. They fear retaliation and do not trust the police. Human rights groups try to ensure that media workers attend high-risk events – such as elections or protests – to provide accountability. But this also comes with problems, as the press is not completely free in Kenya; a trend that is worsening rather than improving.

IMLU gave the example from the 2017 elections, where a journalist was arrested for wearing a bullet proof vest under the pretence that they needed a license to do so. This is done so that if the police start shooting, journalists cannot stay and record it as they will not be protected. And as the 2018 extrajudicial killings show, many incidents occur outside of high-risk events.

Finally, if the perpetrator is identified and the investigation is sufficient for a case to proceed to court, there are still further issues to overcome. NGOs report that police officers obstruct cases by failing to submit the necessary files and evidence. They often attempt to justify killings – arguing that they are necessary to combat crime. Other times, the police simply do not show up to court hearings.

Furthermore, trials are generally quite lengthy. The previously mentioned case of police officer Katita took five years to be finalised. For one, this prolonged judicial process is difficult for the victims’ friends and family to bear. Additionally, it poses problems regarding the ability of witnesses to testify. There have been cases of witnesses passing on before they have had the chance to give their testimony in court. There have been even more cases of witnesses being coerced into silence.

Witness protection in Kenya leaves a lot to be desired – so it is usually not an option for many witnesses. First, there might be no witnesses because none would have come forward in the first place. This is understandable because witness intimidation is common during court proceedings. There are several cases witnesses being threatened. Activists and organizations fighting against police brutality are not spared either.

One high profile case is that of human rights lawyer Willie Kimani. Kimani was representing Josephat Mwenda who had been assaulted by a Kenyan police officer. On 23 June 2016, after attending a hearing at the Mavoko court, the two men alongside their taxi driver were kidnapped in broad daylight. One week later, the three bodies were retrieved from the Athi River in Ol Donyo Sabuk. Four police officers and an informant have been charged with their deaths after the case was bought by IPOA. The trial is ongoing.

All this shows the serious obstacles facing IPOA in the investigation and prosecution of extrajudicial killings. According to an Amnesty International Kenya representative, the Independent Police Oversight Authority requires extensive experience which is usually lacking in most African countries. Besides the lack of expertise, cases are often lengthy – stretching the meagre resources that IPOA is allocated. In its six years of operation, only four cases have been finalised. Is has also been said that they lack complete independence, however Amnesty International’s Kenya representative does not believe this to be the case.

Nonetheless, evidence shows that there is little or no chance of getting justice for the 267 killed by the Kenya Police Service this year. More concrete measures, such as those campaigned for by NGOs like IMLU, need to be implemented.

Leighann Spencer is a PhD candidate in Justice Studies and a freelance researcher and journalist.