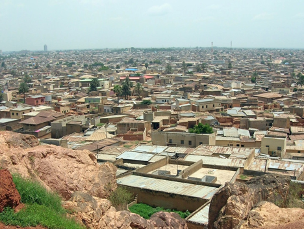 Five months after the first case of COVID-19 was discovered, Nigeria stands at a critical juncture. Global border closures, OPEC disagreements, and shifting sands brought about a cataclysmic change in the country’s number one product – oil. Nigeria’s 2020 budget was designed around the projected price of oil at $59 per barrel, so when the prices slumped so much they were actually recorded as being negative, there was real concern about the future of the Nigerian economy. Although the oil price has since rebounded it remains low, posing a critical question: how is Nigeria going to afford to pay the bills going forward?

On April 30, the IMF (International Monetary Fund) approved its largest COVID-19 emergency financing packaging so far – a $3.4 billion Rapid Financing Instrument (RFI). An RFI is essentially short-term loan which costs 1 percent in annual interest that must be repaid in five years. The dispersal of this loan might be surprising when you consider that only two years ago, the IMF expressed concern over Nigeria’s ability to service its external loans, which are estimated at over $18.9 billion. However, nothing should be surprising in a country that over the decades has increased its reliance on a single commodity that it doesn’t even refine, and thus has to buy back, in a world that is gradually shifting away from fossil fuels.

This was a bad strategy in the 1970s. It is a terrible one today. Germany’s pledge to close all their coal power plants by 2038 is part of a shifting culture on energy sources. In the southern desert sands of Ouarzazate, Morocco has built the largest concentrated solar power plant in the world, which now cover up to 35% of the country’s energy demands. And by 2030, the kingdom aims to have over half of its energy requirements covered by renewables. Do Nigerians truly believe that our government is thinking about the future, or about the welfare of its citizens?

Realities on the Ground

To really understand what is happening, and to put the country’s growing debt burden and shrinking oil reserves into context, we must understand the lived experience of citizens. To illustrate this, let us consider the state of Kano. Much of the early discussion of the effects of COVID-19 focused on Lagos, with the Federal response giving Lagos a significant portion of the emergency response funding. As a bustling metropolosis with a densely packed population in urban areas, Lagos remains an important city to prioritise, but it is very unlike the rest of the country. Stepping outside of Lagos, one gets a slightly different picture.

Home to 14 million citizens, and an aging population, the state of Kano provides an interesting glimpse into the reality north of the capital. As the second largest city in the country, and commercial nerve centre of the north, Kano’s extreme population density, lack of infrastructure and high poverty rate already make it a prime city for the spread of a pandemic.

The political context of Kano is also significant because it perfectly illustrates the sad reality of complete breakdown of a social contract between citizens and their “elected” leaders. The word elected is in quotations because the highly controversial 2019 governorship elections was marred by violence and electoral malpractice that left many questioning the credibility of Governor Abdullahi Umar Ganduje’s victory. Many citizens also distrust the government as a result of the widely publicised Ganduje-gate scandal, in which the Governor was filmed pocketing wads of dollars. In the wake of the scandal, the new tag of #Gandollar began to circulate on social media.

The scandal also served to magnify the deep inequality of a city that is both home to northern aristocracy and hundreds of aljamirai who beg on the streets for alms. So when the Governor first denied that people were dying of COVID19 in his state, and then said he wanted N15 billion from President Muhammadu Buhari to tackle the disease, it is little wonder that residents were left confused. For many, this was just another trick to oppress and exploit the masses.

The real tragedy, of course, was that this time it was not a trick. Nigerians really are dying of coronavirus, and the mixed messages that they are receiving from their political leaders are only making things worse. Ironically, the response of Nigerian legislators has not been to reflect on their own limitations, but to pass new regulations that are supposed to deter the spread of fake news over social media during the pandemic. The joke, of course, is that one of the main drivers of uncertainty and false information is the lawmakers themselves.

Worse still, research conducted by the Centre for Democracy and Development West Africa has shown that the palliative measures have been hampered by a combination of party influence and relief diversion. These issues have been compounded by the mismanagement of funds, poor record-keeping, a lack of health measures such as social distancing, and ultimately an inability to reach a significant percentage of the most vulnerable. This has led to significant economic hardship – the social-economic reality facing many in Nigeria is framed not just by his distrust of politicians, but by his urgent need to hustle for his daily bread.

So if we know that money often does not “trickle down” to the worst off, it is then worth asking exactly what is happening with the country’s COVID19 funds. Given the low price of oil and the growing debt burden, do new loans of over $3 billion represent a dangerous bet on Nigeria’s future?

If there was evidence to show that new economic strategies where put in place to diversify the economy, strengthen the national infrastructure and lead to greater productivity – and therefore increase GDP and make it easier to repay the debt – things would not seem so worrying. But there is no sign that the government will break with the habit of a lifetime and adopt a progressive and nuanced approach. It is therefore concerning that oil prices might not recover to their previous highs for a very long time – and that during that time the salaries of federal workers will need to be paid.

In the absence of an effective state response, Nigerians are once again “doing it for themselves”. In Kano, a group known as ‘Kano Against COVID-19’ has emerged to supplement for the lack of a state. This group in an agglomeration of doctors, lawyers, business men and women, and also includes Aliko Dangote who has already donated a mobile testing lab to the state. This is inspiring – but also demonstrates the severity of the problem. One of Africa’s most resource rich states requires public donations and actions to provide basic test kits and PPE materials.

That lived reality helps to explain why many commentators are looking at the country’s new loans with a mixture of suspicion and concern.

Alhassan Ibrahim is a Programme Assistant with CDD West Africa.