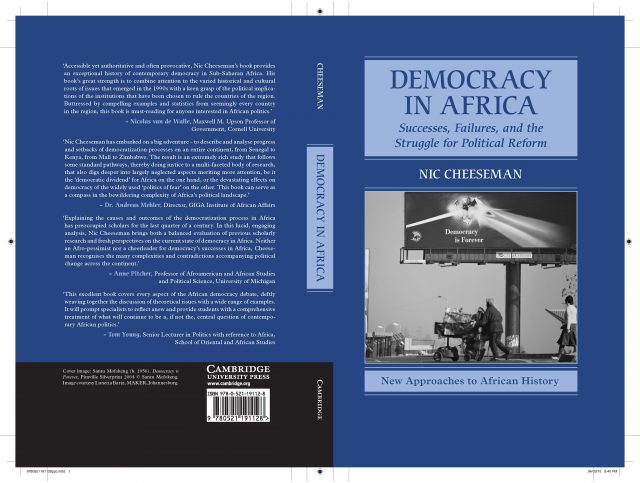 This week marked the launch of our co-editor Nic Cheeseman’s exciting new text ‘Democracy in Africa’. Here, he tells us more about this important contribution to the field.

My new book, Democracy in Africa, is an attempt to tell the history of democracy on the continent from a new perspective. In doing so, it begins to suggest answers to some of the biggest questions facing Africa today, such as whether international actors should try and promote democracy abroad, how to design political systems that manage ethnic diversity, and why democratic governments often make bad policy decisions. Beginning in the colonial period with the introduction of multi-party elections and ending in 2013 with the collapse of democracy in Mali and South Sudan, the book describes the rise of authoritarian states in the 1970s; the attempts of trade unions and some religious groups to check the abuse of power in the 1980s; the remarkable return of multiparty politics in the 1990s; and finally, the tragic tendency for elections to exacerbate corruption and violence.

In telling this story, I try and reposition the debate on Africa. Instead of focussing on what Africa can tell us about ethnic conflict and political instability, I look at what the continent can tell us about how to build democracy when conditions are unfavourable. In the early 1990s, very few African states fulfilled any of the criteria that political scientists tend to think promotes democratic consolidation, such as high GDP, a strong and cohesive national identity, low unemployment, high educational attainment, strong political institutions, and an effective infrastructure. Yet despite this, countries such as Benin and Ghana, like Botswana and Mauritius before them, managed to build viable and durable democratic systems. My starting point is that what is remarkable about Africa is not that natural resources and winner-takes-all politics have at times led to violence and disorder, but that in such unpromising contexts around one-quarter of countries are now ‘free’.

The book also seeks to change the way that we think about Africa on a number of other issues. Instead of focussing on how the 1960s and 1970s saw the gradual reintroduction of authoritarian rule, I look at how fragments of democracy lived on in the continent. This means taking seriously the elections that were held within one-party states, and the space for discussion that was sustained in countries such as Senegal and Tanzania. It also means recognizing the value of placing the multi-party systems that re-emerged in the 1990s in their historical context. Africa’s democratic experiments did not emerge into a vacuum. Rather, they were profoundly shaped by the way that politics was practiced during the 1970s and 1980s. By tracing the history of political participation and competition I reveal some of these continuities, and of course the discontinuities, that help to explain why some countries enjoyed a relatively smooth path to democratic consolidation, while others became stuck in a murky no-man’s land between democracy and authoritarianism.

At the same time, I am very interested in looking at the ways in which African states can break free of their historical trajectories. In challenging Afro-pessimism, the book argues that clever institutional design can help to make democracy work – or at least, work better. More specifically, I suggest that the challenge facing the continent’s constitutional draftsmen is how to harness the benefits of political competition – accountability and pressure to respond to public needs – while maintaining sufficient inclusion to ensure that minorities and those who lose electoral contests feel like they have a stake in the political system. Too much competition is problematic, because the emergence of a winner-takes-all mentality can lead to violent conflict. But too much inclusion – such as the creation of unwieldy power-sharing governments – is also problematic, because it can allow unpopular and incompetent leaders to stay in power at the expense of their publics.

What is therefore needed is a way to harness the power of political competition, while maintaining a degree of inclusion. This means introducing mechanisms to moderate the majoritarian tendencies of most political system, although how much moderation is required depends on the country: there can be no one-size fits all solution to this problem. One of the most surprising facts about Africa, when you consider how prone the continent has been to conflict, is how few constitutions actually build in any kind of formal political inclusion. Federalism is rare, and presidentialism tends to reign supreme. Yet where elements of inclusion have been institutionalised, as in Nigeria, where a federal system has helped to reduce the risk of civil war, or in Mauritius, where the legislature is topped up to ensure that it is more representative of society, we have witnessed valuable ways to maintain political stability in the context of heated multi-party politics.

In this way the book strives for a realistic optimism. Democracy in Africa is an ongoing project. There will be many false starts over the next few decades, and some countries will get more authoritarian while others get more democratic. But if the last thirty years have taught us anything, it is that African states do not have to accept their fate. For this reason, and many others, it is too soon to give up on democracy in Africa.