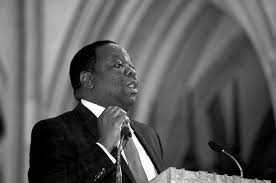 Morgan Tsvangirai, one of the bravest opposition leaders on the continent, has died in a South African hospital aged 65. Here, DiA’s Obert Hodzi reflects on his life and legacy.

***
Morgan Tsvangirai, the man who challenged Mugabe when doing so was most dangerous, is no more. The face of the struggle for democracy in Zimbabwe, Tsvangirai epitomised the hopes and dreams of the common man trapped in an authoritarian state. To millions resigned to the fate of a short but brutal life under Mugabe, Tsvangirai reaffirmed possibilities of a democratic and prosperous Zimbabwe.

In a country were leaders are all too often glossed-over-poster-models, Tsvangirai’s arrests and beatings resonated with a people that endured the same, and even more. He was one of our own, suffering the same things we suffered.

His mistakes, some of which derailed the pro-democracy movement, were heart-breaking, but showed he was also a man. The criticisms and public chastisements he sometimes received from former friends tested his tolerance; and on some occasions, his critics were threatened, beaten and expelled. Yet, at the core, he remained the face of the fight against Mugabe, bearing the load of a citizenry hungry for change.

As the nation mourns his death, five or so months before a crucial general election, the mourning will not be lengthy. He would have wanted it that way: there is a campaign to fight, and he was an effective campaigner.

The coming days are likely to see three develoments. First, the mourning and funeral will encourage a momentary armistice between those who seek to lay claim to his legacy: Nelson Chamisa, Elias Mudzuri and Thokozane Khupe – all of whom have set their sights on the MDC presidency. However, Chamisa and Mudzuri have for the past weeks fought over the Acting President position, and this dispute is likely to re-emerge in time. Both have  claimed to have been appointed by Morgan Tsvangirai and at the time of his death, they both were preparing to hold rival National Standing Committee and National Council meetings on 15 February 2018. Without Tsvangirai to confirm which of the two he appointed as Acting President, Chamisa and Mudzuri may not be able to reconcile. This would be disastrous to the electoral prospects of the opposition.

Thokozane Khupe, the only one of the three to have been elected at congress, will hope the MDC-T Constitution will be on her side. But there is nothing to suggest Mudzuri or Chamisa will relent on their claims for the sake of constitutionalism – which could trigger further fragmentation.

Second, the mourning of Tsvangirai will unite political parties in Zimbabwe for a short while. All deaths in Zimbabwe do, as friends and enemies make a show of unity in mourning for different reasons. They will put up a show of unity, attend the meeting at Harvest House today and pay their respects. That show of unity can be an opportunity to make amends, refocus and put their differences aside. Already there are calls for the MDC-T leadership to be united, to pull in old allies, and win the election in honour of Tsvangirai.

Third, Emmerson Mnangagwa has previously made conciliatory moves toward Tsvangirai. Inviting him to his inauguration, visiting him at his Highlands home, approving Tsvangirai’s pension and agreeing to pay his medical bills. The Zimbabwe government has instructed the Zimbabwe embassy in South Africa, as reported by The Herald, to assist and pay all costs for Tsvangirai’s body to be repatriated back to Zimbabwe while decisions on further assistance are being made. There is speculation that he might even be declared a national hero, and at least be granted a state funeral. The political advantages to Mnangagwa will be enormous. And as a leader that has never won an election himself, the new president he will fear being on the wrong side of Tsvangirai’s legacy.

Thus, although under his leadership the MDC split a few times, and at the time of his passing, there were obvious divisions, in his death, Tsvangirai may finally get the big tent he envisioned. A tent that accommodate political opponents and allies alike. A tent that symbolises a new dispensation, a new kind of politics in which the opposition is a key stakeholder rather than an enemy of the state. A tent that provides space for a new generation of national leadership to flourish alongside their elders. A tent where the new can be born!

But for this to happen, leaders such as Chamisa, Khupe and Mudzori – and many others – will have to put their difference aside to focus on what they have in common rather than what divides them. And that is easier said than done …

“We must recognize the imperative that new hands, with the full blessing of the people, must take this struggle and this country forward with the destination remaining the same – a society that prides itself for not leaving anyone behind in their pursuit of freedom, prosperity and happiness. That is the only lasting legacy and precedence that we must leave to future generations” Morgan Tsvangirai, 2018.