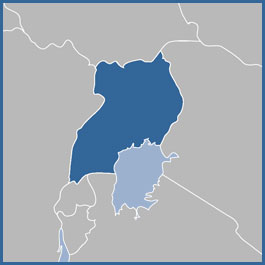 In this blog, Michaela Collord writes that the ouster of a top NRM cadre reveals the President’s struggle for control within the ruling party. Michaela is a PhD candidate in politics at the University of Oxford. This blog post was originally posted on the Presidential Power blog.

Uganda’s ruling National Resistance Movement (NRM) is undergoing what may turn out to be its biggest internal battle since it came to power in 1986. At surface level, the dispute revolves around one high ranking party cadre and his alleged presidential ambitions. But this political affair lays bare two broader issues: first, the weak institutionalization of the NRM party—which has multiple, conflicting implications—and second, the determination of President Museveni to further consolidate his power and that of his immediate family circle

The current conflict exploded across newspaper headlines on September 18 when President Museveni sacked his Prime Minister, Amama Mbabazi, in a one off cabinet reshuffle. This initial fall from grace left Mbabazi with his position as NRM Secretary General intact. On October 18, however, the NRM Central Executive Committee (CEC) pressured Mbabazi into taking a ‘temporary leave’ from his duties as SG, pending a meeting of the NRM National Delegates Conference scheduled for December 15.

Mbabazi’s rapid decline was all the more remarkable given his status as a long-standing ally of President Museveni. The two men have known each other for over 40 years. Mbabazi helped oversee resource mobilisation for the National Resistance Army during the 1980s ‘bush war’, which brought Museveni to power. He later served the President as Minister of State in the President’s Office, Attorney General, Minister of Justice, Minister of Defence, and Secretary General, a position he has held for the past nine years. When Museveni appointed Mbabazi Prime Minister in 2011, many began speculating that the President—in power since 1986—was lining up his successor.

That was clearly a misinterpretation. Indeed, it was Mbabazi’s perceived desire to succeed Museveni that led to his undoing.

From ‘loyal cadre’ to presidential rival

The relationship between Museveni and his close ally took its first hit when Mbabazi refused to relinquish his position as party Secretary General after being appointed Prime Minister. Museveni argued this dual-mandate was untenable, but Mbabazi maintained that, according to the NRM constitution, the SG position was not a bureaucratic one and therefore did not require a full-time commitment.

Museveni’s concern nonetheless deepened after the NRM lost a string of bye-elections in 2012, leading many to point a finger at the SG’s poor mobilization efforts. At the same time, rumours spread that Mbabazi was using his position to enlarge his personal support network and thereby prepare to challenge Museveni ahead of the 2016 presidential elections. At an NRM National Executive Committee meeting in 2013, intelligence reports alleged that Mbabazi smuggled 78 people who were not party delegates into the meeting to speak in his favour.

In February 2014, when the NRM parliamentary caucus enthusiastically adopted a resolution endorsing Museveni as the sole NRM candidate for the 2016 presidential elections, this action was widely interpreted as a thinly veiled effort to pre-empt a potential Mbabazi candidacy. Far from stifling a latent conflict, however, the caucus resolution led to fresh concerns after it triggered a widely publicized schism in the NRM youth wing, a number of whose leaders declared themselves in favour of Mbabazi for president. A few leaders were briefly jailed, charged with soliciting signatures from NRM members to force the party leadership to call a delegates’ conference. Leaked intelligence recordings later revealed that the Inspector General of Police Kale Kayihura had been interviewing NRM youth about Mbabazi’s mobilisation work out of fear that the SG would be able to marshal enough support at an eventual delegates’ conference to win the party presidential nomination.

A further mark against Mbabazi came after an NRM parliamentary caucus select committee, charged with investigating the botched 2010 party primaries, interviewed Mbabazi only to learn that the SG kept the party register at his private office and refused to hand it over. Mbabazi’s daughter, Nina, who led a group of volunteers responsible for compiling the party register, refused to meet with the committee. Mbabazi’s wife, Jacqueline, had already laid her cards on the table when she compared the parliamentary caucus to a group of ‘fascists’ in the wake of the Museveni sole candidacy resolution.

As Prime Minister, Mbabazi is also alleged to have used his position as chair of Cabinet meetings to marginalise ministers close to Museveni. In early September, youth dressed in Mbabazi T-shirts also started making an appearance at the national football stadium.

Museveni began his effort to undermine Mbabazi long before dropping him as Prime Minister. Many describe the President’s frequent tours around Uganda, which he uses to distribute gifts, as on a par with pre-election campaigning. Some claim that Museveni is also working to ‘neutralize’ Mbabazi economically. The Central Bank closed Mbabazi’s bank, the National Bank of Commerce, under uncertain circumstances while companies associated with Mbabazi have begun losing government contracts. In another strategic manoeuvre, Museveni has appointed a cohort of youthful ministers to act as his new go-to partners in government, thereby side-lining his erstwhile favourite, Mbabazi. Among these new ministers is Richard Todwong, Minister without portfolio charged with political mobilisation, who is viewed as a de facto Secretary General.

There have also been efforts at counter-mobilisation among the youth, led primarily by people in the army and police force. Commissioner for National Patriotic Education, Lt Col Henry Matsiko, is championing ‘patriotism’ lessons in schools while Inspector General of Police Kayihura rallies university students to become ‘crime preventers’, the aim being to ensure 50 crime preventers per district.

Shortly after Museveni sacked Mbabazi as Prime Minister, the NRM party caucus recommended that a group of Ministers tour the country ostensibly in order to monitor implementation of the NRM’s 2011 party manifesto. The group Museveni appointed—led by the younger generation of Cabinet favourites—has been using the tour to peddle the Museveni sole candidacy resolution while de-campaigning Mbabazi.

The meeting of the NRM Central Executive Committee, which led to Mbabazi taking his ‘temporary leave’ as SG, was a further step in Museveni’s drive to push out his political rival. While a success on many levels, the meeting did not go entirely according to plan. Museveni’s claims that Mbabazi had been campaigning to stand as President led Jacqueline Mbabazi, head of the NRM women’s league, to accuse President Museveni, who is also NRM party chairman, of hypocrisy. She argued that nothing bars an NRM member from campaigning for the party nomination, as indeed Museveni has done himself. What’s more, she rejected the parliamentary caucus’ sole candidacy resolution on the grounds that the caucus is not the party organ vested with the constitutional power to designate a nominee. That power lies with the National delegates’ conference. Although a majority of those present at the CEC meeting appear to have sided with Museveni, a number of prominent NRM cadre showed sympathy for the Mbabazis, revealing a rift in the NRM leadership.

The weakness of the NRM

The Mbabazi-Museveni saga is far from over, but its wider significance is already becoming apparent.

First, the current tensions highlight a contradiction within the NRM itself, which raises serious concerns about party cohesion. This contradiction stems from the contrasting implications of the NRM’s weak party institutionalization.

On the one hand, the NRM’s continued failure to develop strong party structures at the local level—a legacy of when the NRM ruled under a ‘no party’ system—is a major contributing factor to the current party malaise. The fact that the Mbabazis—Amama and his daughter Nina—were able to maintain the party register like a piece of private family property attests to a more fundamental lack of organization within the ruling party. This is not a situation that can be resolved simply by ejecting Mbabazi, nor will it be remedied once the NRM changes its constitution to introduce a technocratic SG, as is currently being proposed. Rather, as was concluded following the above-mentioned investigations into the chaotic 2010 party primaries, the NRM needs to restore confidence among its members by undertaking critical reforms. These touch on everything from membership registration to candidate nomination to primary election management through to clarifying the party hierarchy in order to ease high-level party decision-making. Short of this, the party will continue to suffer from embarrassing internal conflicts, time consuming legal suits, low morale and disaffection among elected members, not to mention electoral defeats. Meanwhile, in the absence of reliable party structures, the state security apparatus is likely to become ever more present in routine political mobilisation processes, as is already the trend.

Although weak institutionalization at the lower levels of the NRM makes party discipline and control more unpredictable, there are nevertheless clear signs that Museveni views this institutional weakness as desirable at the higher levels of the party decision-making structures. Indeed, he is perfectly happy to use the NRM parliamentary caucus, where he can more easily manipulate pliant MPs, as the supreme party decision-making body. Lately this has proved more expedient than relying on the Central Executive Committee full of party Big Whigs, many of whom view themselves as his peers rather than subordinates. Museveni has, moreover, repeatedly tried to disregard the party constitution (at one point claiming he would assume the powers of SG), but this disregard has met with staunch criticism from his opponents within the NRM.

To recap, there is a fundamental contradiction emerging within the NRM organisation at the moment. While the party would benefit from strong institutions throughout, notably at the lower levels, the ever increasing identification of the party with a single individual—Museveni—encourages a personalization of power at the top, which overrides existing institutional structures.

This observation leads to a second, and final, point arising out of the Mbabazi affair: the focus of NRM party reform has never been primarily about ensuring party endurance, like say is the case for the far more institutionalized CCM party in Tanzania; rather, the NRM has remained a personal vehicle for Museveni. Previous reforms, for instance in the run up to the major constitutional amendments of 2005, have focused on securing Museveni from rivals and on ensuring more discipline of party dissidents. Party members have been content to ride the presidential coat-tails, so long as Museveni can continue to orchestrate NRM electoral victories. This continues to be the case today, although with increasingly worrying implications as the President looks beyond the civilian structures of the NRM party towards the security forces to do the political work.