In this opinion piece, Alex Laverty argues mobile phone polling prior to elections in Zimbabwe could have made an important contribution to political parties trying to shape their policies, and election monitors trying to ascertain the degree to which Mugabe’s victory was real or rigged… For more details on the technical side of Alex’s propositions, take a look here.

The recent re-election of Robert Mugabe as president of Zimbabwe and ZANU-PF’s success in securing two-thirds of the country’s parliament seats has shocked international observers and led to claims of vote rigging and manipulation. The challenger, the Movement for Democratic Change (MDC), has been the loudest in labeling the election as a farce. However, evidence has yet to surface to substantiate their charge that fraud was the primary cause for their opponent’s runaway success. Their assertions may yet be proven, but a more frightening and shocking conclusion is that ZANU-PF was more adept at getting their members to vote than the MDC. Could hubris have led the challenger to believe that all that was needed was a free and fair election to remove Mugabe? That would certainly be underestimating the octogenarian liberation leader.

Whatever revelations emerge in the coming days and weeks, it is clear that such a wide margin of victory was not anticipated. Surveys were conducted in the lead up to the election, but they gave no indication that ZANU-PF was set to sweep constituencies that they had lost in the past. Most showed that MDC had greater support in the country, or that the election looked set to be a close race (around 30% each). Journalists speculated that a fear of reprisals meant that many people had refused to answer the poll. They predicted that the undecideds would break for the MDC come polling day.

This lack of reliable data meant that predicting Zimbabwe’s electoral outcome was extremely difficult. Observers were left to base their conjecture upon previous election results or more recent qualitative data. In contrast to Zimbabwe, countries like the United States are inundated with poll after poll, especially around election time. Perhaps America has reached something of a statistical saturation point, but this should not blind us to critical benefits that polling can provide.

First, political parties in countries with constant polling are able to get up to date responses and reactions to their policies and promises. Whether this leads to good policy-making is the subject of debate, but it certainly serves the electorate during election season because feedback can be given about party’s and candidates’ proposed solutions and strategies. As this was not available in Zimbabwe, challengers were forced to use older, less accurate, methods of counting supporters and gaining feedback: numbers at a rally, number of t-shirts distributed, and registration numbers based on ethnic or regional lines. This means that campaign managers were not able to achieve the precision needed to adjust their strategies in a close election.

Second, without accurate polling, election corruption and fraud monitors have no way to know if the ‘true’ voice of the people has been heard. With numerous ways to tamper with voting, monitors can never prove that rigging occurred by demonstrating what the results would have otherwise. However, if accurate polling had been done in the weeks leading up to the election, monitors would have had an additional validity test for the election results.

The most challenging part of conducting polls in countries like Zimbabwe has been the inaccessibility of people living in rural areas. Accessing this section of the population is crucial because, for much of the 20th century, the urban and rural divide has been a key fault-line in African elections. Roughly speaking, in Zimbabwe, the MDC has their base of support in urban areas, while ZANU-PF is supported in the rural areas. Thus any traditional poll, via land line or in person, conducted in Zimbabwe would be unable to properly sample the rural population because of inability to contact enough rural citizens.

I believe these challenges can be overcome if we utilize mobile phones to serve as a conduit to ask basic electoral and demographic questions. With mobile penetration nearing 100% in Zimbabwe, a mobile-based poll makes sense for a system that is seeking to reach and query all Zimbabweans quickly.

A group of local NGOs and national media organizations would be the best partnership to oversee such a program. This polling alliance could partner with the national telecoms companies to access the SIM cards currently in use, entering all the active phone lines into a database that would randomize which numbers received text messages. To ensure complete anonymity, any user data would be removed from phones numbers when they were entered in the database.

This polling alliance would then randomly send SMSes until a sample size of around 1,000 is achieved. A simple text message combination could look like this: 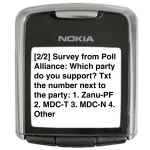 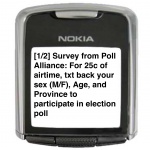 By collecting demographic data at the same time, statistical weighting can be applied to make sure the populations are sampled correctly. To increase the validity of the poll, a small monetary incentive could be provided in order to achieve higher response rates. In Zimbabwe, an SMS usually costs 10 US cents, so a token 25 cents of airtime could be provided and funded by the NGO/media alliance. This is a popular tactic among academic polling groups, as achieving high response rates over an unfamiliar medium can be difficult.

The benefits of such an undertaking would be to provide candidates and political parties a far better method to gauge public opinion during their campaigns and would aid election monitors in investigating fraud and vote-rigging by identifying areas where the official results vary significantly with the polling results.

Mobile phones will never be the silver bullet needed to eliminate corruption or election fraud. But used by the right people, in the right manner, mobile phones can be useful tools. In Zimbabwe, a shocking result could have been foreseen or charges of fraud could be verified through more accurate polling. Going forward, mobile phone based polls can provide insights into voter behaviour, campaign strategies, and demographic preferences in Africa that have yet to be captured fully by scholars and pollsters. By utilizing the most ubiquitous form of communication on the continent for electoral opinion polling, Zimbabweans can get a better idea of whether the ‘true’ voice of their nation have spoken.