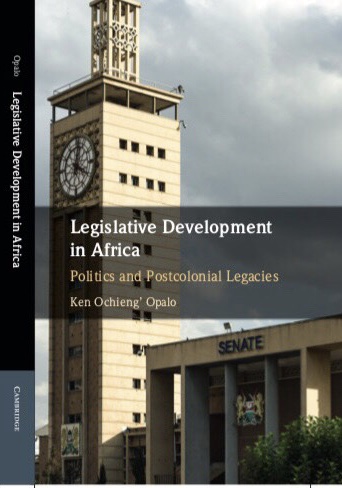 In the latest instalment of our popular Book Club feature, one of the rising stars of African studies, Ken Opalo, shares the main messages of his important new work Legislative Development in Africa.

Descriptions of African legislatures in the popular press and academic works often depict these institutions as uniformly weak and inconsequential for political and policy outcomes. Yet throughout the region’s postcolonial history, legislatures with varied levels of institutional strength and independence, have structured African politics and political development. In Uganda, Senegal, Sierra Leone, and Gabon, disputes between intransigent legislatures and chief executives precipitated the countries’ descent into autocracy in the 1960s. More recently, legislatures have stopped the scrapping of term limits in Zambia and Nigeria, and nearly done so in Burkina Faso and Burundi. And even when they are largely “passive”, legislatures are important arenas for intra-elite cooperation and sharing of governance rents. The need for a deeper knowledge and understanding of African legislatures is especially important in light of the emerging trend towards greater institutionalization of politics in Africa.

Legislative Development in Africa examines the specific ways in which the colonial experience, contingencies of decolonization, and the dynamics of postcolonial autocratic rule conditioned the development of African legislatures.

For this reason, the colonial experience with legislatures deeply influenced postcolonial African political development. States with older legislatures at independence were more likely to have stronger postcolonial legislatures, fewer coups, and less likelihood of descent into conflict.

At first, disputes emerged between weakly institutionalized legislatures and relatively over-developed executive branches that replaced the autocratic colonial administrations. In many instances, a working inter-branch relationship emerged in which presidents tolerated legislatures. But in other instances, the incompatibilities were insurmountable, leading to the abolition of legislatures.

Counter-intuitively, more powerful presidents were more likely to tolerate functionally-autonomous legislatures. Because of the preponderance of executive branches, postcolonial legislatures evolved in the shadow of presidents. Presidents’ ability to balance legislatures therefore provided the upper bound of legislative institutionalization and strength. Therefore, strong executives were likely to preside over organizationally autonomous legislatures. More threatened by legislative strength and independence, weak executives either abolished legislatures or significantly meddled in their internal operations, thereby stunting legislative organizational development. For a casual observer, legislatures under both conditions looked uniformly weak, on account of the fact that legislative outcomes seldom varied from chief executives’ preferences. But the internal processes through which these outcomes were achieved differed. Relatively independence under stronger chief executives created incentives for legislators to invest in organizational means of dealing with intra-elite distributive conflicts.

Third, legislative development following the re-introduction of multipartyism in the early 1990s was conditioned by the level of internal organizational development at the time of transition.

Relative to their counterparts that developed under weaker autocrats, legislatures that developed under stronger autocrats were more likely to take advantage of their newfound political freedom under multipartyism to further entrench legislative autonomy and power. This is shown in their ability to hold more sessions, get bigger budgets, pass fewer shares of executive bills, and give legislators higher pay. Briefly stated, strong autocratic legislatures begat strong democratic legislatures.

The book combines quantitative overviews of African legislatures with detailed quantitative and qualitative case studies of the Kenyan and Zambian legislatures. Backed by a strong Provincial Administration, Kenyan presidents had the ability to effectively monitor, regulate, and balance legislators. They were therefore relatively tolerant of internal legislative autonomy. Postcolonial Zambia underwent significant restructuring and politicization of its Provincial Administration, a fact that diminished the president’s ability to monitor, regulate, and balance elite political action. Relatively higher levels of presidential political insecurity led to greater meddling in legislative affairs in Zambia than in Kenya. These dynamics were further reinforced by differences in the strength of the founding ruling parties. In Kenya, KANU was weak, which meant that parliament was the focal arena of intra-elite politics. In Zambia, UNIP’s strength enabled it to serve as a substitute for the legislature. These foundational differences explain the divergence between the Kenyan and Zambian legislatures in observable measures of institutionalization and strength since the early 1990s.

While my focus is primarily on African states, this book is an important contribution to our understanding of postcolonial legislative development around the world in the shadow of relatively more powerful chief executives. It also shows the many ways in which postcolonial legislatures conform to theories and standard predictions of legislative outcomes derived largely from studies of older legislatures in Europe and the United States. Finally, the book emphasizes the importance of legislative studies to our understanding of politics in emerging democracies. Especially in Africa, there is a need to go beyond presidential politics and give due attention to legislatures and other institutions of state.

Ken Opalo is an Assistant Professor in the School of Foreign Service at Georgetown University.