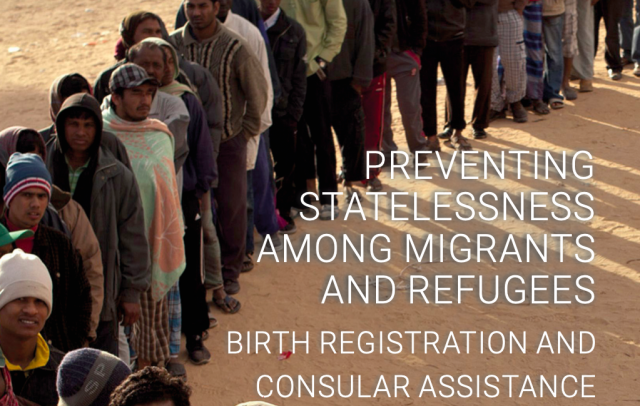 In September 2015, the Sustainable Development Goals (SDGs), painstakingly elaborated by the combined mass of global development actors, established the target that states should, by 2030, ‘provide legal identity for all, including birth registration’. The SDG target reflects a recently consolidated consensus among development professionals on the importance of robust government identification systems for the effective delivery of government services and as a foundation for economic activity. Just one year earlier, UNHCR launched a ten-year campaign to end statelessness by 2024. A ten-point global action plan called, among other things, for universal birth registration.

Birth registration, the protection of identity, and the right to a nationality are already firmly established as rights in international human rights law, and universal birth registration is already a long-standing objective of UNICEF and other agencies concerned with child welfare. There is extensive international guidance on the implementation of birth registration within a broader framework of civil registration, both for legal purposes and as a critical source of population data for government planning and public health. ‘Legal identity’, however, was not a term that had any pre-existing definition in international law. Although the UN agencies finally adopted a joint definition in late 2019 to guide a new ‘Legal Identity Agenda’, those seeking to implement the SDG target are still struggling to decide exactly what it means.

In practice, identification systems are being upgraded at a ‘dizzying pace’ across Africa, as they are elsewhere. National identity cards have been introduced where they did not previously exist, or converted to biometric versions where they did. In parallel, there is a major initiative by UN agencies and the African Union to improve civil registration and vital statistics, including a series of high-profile ministerial conferences.

I considered these developments in two recent articles. In the Statelessness and Citizenship Review I explore the potential impact of the SDG ‘legal identity’ target on the resolution of statelessness. Like the UNHCR global action plan to end statelessness, the paper emphasises the important contribution that universal birth registration would make to ensuring respect for the right to a nationality. Birth registration provides the most authoritative record of the information on the basis of which nationality (the term most often used in international law for what is called citizenship at national level in Commonwealth countries), and many other rights based on family connections or place of birth, may be claimed. But the target for universal birth registration does not consider the immense complexity of providing proof of this information in a context where neither parent has an existing identity document, nor the legal records of marriage, divorce, death, adoption, change of name, or residence, that may be required – perhaps needing to be sourced from the authorities of another country – in procedural systems modelled on European templates that bear little relationship to the situation on the ground in many African states.  These challenges of conflicts of law and expectations for paperwork have in fact proved difficult to resolve even within the European Union, with the presumption of legal residence that follows from citizenship of another member state.

A twinned article in World Development pursues the complex implications of the ‘legal identity’ target in relation to adult identification systems. The countries where new identity systems are expected to be of the greatest benefit for economic development are the countries where the highest percentage of the population is currently undocumented. This means that the process of enrolling all adults into a national population register requires a multitude of individual decisions as to whether a person is a citizen or not; and if not a citizen, whether they have another status entitling them to remain in the country. That is, it potentially creates a much sharper divide between those with the rights of citizens and those without; indeed, as the new systems are rolled out, governments are increasingly linking access to services such as health and education to possession of a centralised government-issued form of identification showing citizenship or other legal presence in the country. Yet presentations of current identification initiatives in Africa often suggest that the new biometric identification systems will in themselves facilitate access to government services and promote social inclusion, without considering the fate of those who fail whatever (potentially arbitrary) tests are imposed to qualify for issue of a document.

One approach to this conundrum has been to enrol all residents of a country into a biometric database, with minimal biographical information, leaving tricky questions of citizenship and legal status in the country to be determined later. This approach was developed in India, where the ‘Aadhaar’ biometric registration and identity number is not linked to legal status in the country (although this has not prevented Aadhaar from being inaccessible to those with contested citizenship in Assam); and similar registration programmes have been supported by the World Bank in several countries in West Africa. The view is that the simple ability to prove who you are, and that you are the same person on the next interaction with the authority concerned, has benefits both for the person concerned who was previously unable to participate in the formal economy; and for the state, which can reduce fraud and corruption, and benefit from the tax generated by wider inclusion in the formal economy.  In practice, however, the legal identity target has almost everywhere been invoked in the cause of biometric national identity cards that record status as citizen or non-citizen.

These new identification systems are particularly significant for the future of democracy in Africa because voter registration cards have functioned as informal identity cards in many countries where no centralised national identity card was established until recently. When a new national identity card has been introduced, existing voter cards have generally not been accepted as sufficient proof of an applicant’s citizenship, even if they feature as supporting documents. At the same time, voter registration cards are no longer accepted as identity documents for the range of purposes for which they were previously used; while new voter registration everywhere has been increasingly conditioned on possession of a national identity card (even in states that have always had a national identity card, this was not always the case).  The decision on who is or is not a person entitled to identification as a citizen (a person eligible to vote) is thus taken away from the independent electoral commissions created across the continent after many years of struggle, and placed back with the executive – typically the ministry of the interior (a ministry that has a focus on national security and immigration control, rather than citizen empowerment).

The existence of a body named an ‘independent electoral commission’ is clearly no guarantee of genuinely free and fair elections, without considering the broader context. Yet it is not for no reason that African citizens and opposition parties have spent several decades insisting on the principle of independent election management in negotiations over new constitutions and electoral legislation. We can extend to identification systems generally the conclusion that ‘the greatest gains from digitization come in countries where the quality of democracy is higher and the electoral commission more independent’. Protecting #DigitalDemocracy in Africa may require as its founding campaign a call for independent identity commissions to protect the rights of those who believe themselves to be citizens, but lack the existing documents to prove it, and find themselves left in a non-citizen or stateless limbo.

How can we address global knowledge inequalities in international research partnerships?

Peace, or continued war in Ethiopia?