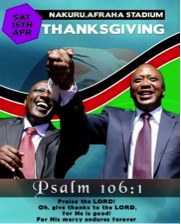 Following a recent thanksgiving ceremony to celebrate the ICC’s charges being dropped, Gregory Deacon explores the relationship between religion and politics in Kenya. Gregory is an independent researcher and adjunct assistant professor at Union College, New York. Pictures by Ruth Kenyah.

On 16 April, Kenya’s ruling party held thanksgiving prayers celebrating the withdrawal of charges against its leaders at the International Criminal Court (ICC). President Uhuru Kenyatta and his deputy William Ruto have organized and participated in mass prayer rallies ever since they were called to appear before the ICC in 2010. During these rallies, clergymen of all denominations laid hands upon the leaders and asked that truth prevail in the form of favorable verdicts. Many Kenyans who witnessed these events were impressed by the their supplication for protection and convinced that the ICC’s charges were evidence of western and satanic conspiracy. It follows that the leaders of the Jubilee coalition – now freed – will both save the nation and bring prosperity. This narrative was solidified by the general election in 2013 and vindicated by the end of the ICC’s cases. The latter were celebrated as absolute proof of God’s divine intervention and His desire for “Uhuruto” to lead Kenya.

Whilst last weekend’s rally should be seen in the context of a national politics that is shaped by ethnicity, economics, corruption, and zero-sum electoral politics, the role of religion must be taken seriously. The Jubilee Alliance is a Christian alliance and the role of religion has never been more important in Kenya than it is today. In 2013, Deputy President William Ruto declared ‘Where we came from it’s taken God to get us here and we trust in God for the future’. Last weekend, he once again stated his amazement that God had so clearly selected him and his president to lead Kenya in a new era of peace and prosperity.

These events can be challenging to the largely secularised field of the social sciences, which tends to understand religion as a private matter without public relevance. That is clearly not the case in Kenya. Last weekend, at this extremely prominent, public event, speaker after speaker began their speeches as the vast majority of sermons begin in Kenya, with the well-known audience call and response that ‘God is good / all the time and all the time / God is good’. Supporters once again rejoiced in the image of their leaders as anointed men of God, chosen by God, who spoke with voices from God.

By taking the role of Christianity in Kenya seriously, we can grasp how it came to be that the two main orators were celebrating the vacation of charges at the ICC that they sponsored and organized crimes against humanity through violence against each other’s ethnic communities – Kikuyu and Kalenjin. The Nakuru prayers deepened the discourse that repentance and forgiveness were bringing about national rebirth and prosperity through divine blessing. As I argued in a recent article, the 2013 election was overwhelmingly understood as an opportunity to save Kenya from its past sins and the horrors of the violence that Kenyatta and Ruto were accused of orchestrating in 2007-08.

The Nakuru rally was a triumphal restatement of the belief held by Jubilee and their supporters – who are a numerical electoral majority – that God chose Kenya to be reborn in 2013 through its election and the coming together of the anointed leaders of two warring (but both victimized) communities. Satan was said to have entered the nation in 2007 and a collective effort was imperative to drive him out again. Jubilee campaigned with the message that their individual repentance and forgiveness was redemptive, washing the nation clean of its past sins. Their language and imagery reflected Evangelical, Neo-Pentecostal or born-again theology, despite the fact that President Kenyatta is a Catholic. In practice, this evangelical discourse and imagery is comprehensible and attractive to most Kenyan Christians, whether they claim denominational affiliation to ‘mainline’ (Catholic or Anglican mission) churches like Kenyatta or to newer, Evangelical movements, like William Ruto.

This use of religion by the government is historically significant: previously Christianity was a source of subversion and resistance. Through the 1980s and 1990s, for example, prominent bishops belonging to the National Council of Churches of Kenya (NCCK) utilized their positions and access to external resources in order to voice criticism of the government. Today, the role of popular religious discourse and imagery has displaced the importance of religious institutions. Grasping this helps us to understand the role of religion in national identity, comprehend events like last weekend’s prayer rally, acknowledge the place of self-censorship in popular discourse, and gain insight into elections over the next decade, where we can expect William Ruto to continue the narrative of divine choice and national progress.

If we understand Jubilee as a Christian alliance, who see themselves as charged with a Holy mission then insight is also provided into the struggles of Kenya’s opposition to present a significant challenge to the nation’s dominant ruling bloc. Attempts by the Coalition for Reform and Democracy (CORD) to call for redistribution of wealth appear weak, obstructive and lack the immediacy of Jubilee’s portrayal of the country being swiftly blessed with success. Furthermore, Kenyatta has been able to warn of dire consequences for those who stand in any way against God’s chosen rulers and diverge from the singular, divine path to glory that Jubilee describe and believe they must lead. The Nakuru event was much more than a party – it was a ringing statement of a concord between Jubilee and God, and woe betide those who attempt to stand in the way of divine prophecy or the power of the Lord

The productive failures of biometric voting in Africa