Anti-corruption will make international headlines in 2021, not just with the odd scandal but also due to the UN General Assembly convening a special session against corruption in June for the first time. With the need to ensure integrity in health responses to the pandemic, as stressed by UN Secretary-General Antonio Guterres, the anti-corruption agenda is as salient as ever. But what do we know about the impact of communication around corruption, and what does it mean for national and international development efforts, whether they are announced with fanfare or conducted out of the public eye?

For a start, fighting corruption is good for public relations. The promise to do away with corruption is an attractive message for political campaigns, and played a big role in the elections of Muhammadu Buhari in Nigeria – who also became the African Union’s 2018 ‘anti-corruption champion’ – and John Magufuli in Tanzania, also known as ‘the bulldozer’. Their rise to power can be directly linked to their effort to be seen as ‘incorruptible’ politicians. Highly visible anti-corruption campaigns such as in China under Xi Jinping can improve the popularity of regimes among large swathes of their citizens, and improve leaders’ odds of staying in power. Malawi’s new president, Lazarus Chakwera, seems to be garnering support with a first series of policies that crack down on corrupt government officials.

Anti-corruption campaigns can, however, also be a weapon used to discredit the opposition and jail competitors. There are instances where anti-corruption commissions and watchdogs have been politicised and biased in favour of the powers that be, even to the point of becoming a ‘debt collection agency for the powerful’ in Nigeria. An open anti-corruption stand is not necessarily a win for leaders and their countries: it can become part of power games that fuel political authoritarianism, as is increasingly the case in Tanzania. Even when high-profile anti-corruption authorities are not instrumentalised, they can find themselves under-resourced and see their work obstructed in a variety of ways because otherwise they would threaten powerful interests. This has been the case in Tunisia, where the institutions created with extensive communication after the 2011 revolution have been progressively sidelined and were ultimately unable to address corruption seriously.

So, how should we talk about corruption and anticorruption – out in the open or more discreetly?

The case for keeping anti-corruption under the radar

Evidence from Nigeria suggests that increasing awareness of corruption’s prevalence can undermine efforts to fight it. Talking about corruption as something widespread, even in order to condemn it, can end up normalising it and lead people to ask the question: ‘if everyone does it, why not me?’

Further, corruption does not always mean bad news. In fact, evidence suggests that it can bring benefits too. Some forms of corruption allow people to bypass unfair or unwieldy regulations and get things done. A striking example is how corruption helped boost China’s growth rather than hindering it. In fragile states, corruption is often key to a fine socio-economic balance and combating it can deprive people of their livelihoods and foster violence.

Because of the diversity of its forms and effects, there are promising efforts to unbundle corruption.

This table summarises some of these to help distinguish the different types and impacts:

Author’s own graph based on the sources mentioned in this article.

In light of this diversity of the forms and effects of corruption, it seems that overlooking or working ‘around rather than against’ some of its manifestations is the wisest choice. In an ideal world, the same level of nuance could also be adopted when campaigning against this phenomenon: ‘zero tolerance’ no longer appears to be the best approach. But dropping it is unlikely as political slogans need simplicity.

The same applies to development partners. Although some have started taking a ‘soft touch approach to the ‘zero tolerance for corruption’ rhetoric, it is difficult to adopt a nuanced official stance towards corruption when you are accountable to taxpayers. All the more so when aid is contested, as is the case among many donors that face mounting budgetary constraints, for instance in the United Kingdom with its Foreign, Commonwealth and Development Office merger. And even though donors cannot afford to make headlines over how they give a pass to some corrupters, some research suggests that they should do precisely that.

So for both national and international development efforts in favour of anti-corruption, there may be value in toning down the rhetoric, which by its nature is simplistic and constraining, and focusing on getting the job done under the radar instead.

The visible and the discreet: Two ways forward for donors

In their pursuit of less corruption in partner countries, many international donors have come to terms with the fact that projects targeting corruption nominally are an important but relatively small part of the equation. There are, in fact, two better ways to move forward in the fight against corruption.

Method 1: Do no harm as a clearly stated priority

The first one is ensuring that donors’ own domestic policies do not encourage corruption. Many areas are likely to have a negative impact: defence procurements, corporate taxation, commodity trading, banking secrecy… Over the years, gradual recognition of this has yielded some change such as curbing the practice of making bribery of foreign officials by national companies tax deductible. Some, such as the United Kingdom, have officially made anti-corruption a national priority by adopting a whole of government approach, while others, like Sweden, incorporate the priority progressively in their relevant policies and strategies.

Promoting coherent policies that address corruption at home or abroad, in areas that are of core national interest, can be extremely tricky. As the United’ Kingdom’s experience shows, success in policy coherence for anti-corruption requires internal coordination, but also political backing at the highest possible level, and strategic communication both within administrations and with the outside world. In other words, it cannot be done fully under the radar. A public statement by a head of government or minister, or even a sectoral strategy, are dearly needed to legitimise the anti-corruption ‘champions’ within governments, empowering them to conduct analysis and hold other policy areas accountable.

Here are some examples: 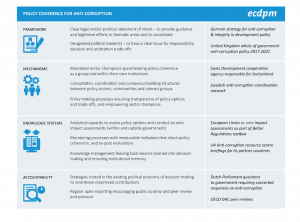 By integrating the findings of research on corruption and on thinking and working politically, donors can support local efforts and the demand (often expressed by civil society) for integrity. But since this tends to challenge sitting governments, it is often done without much fanfare and via third parties, such as donor countries and international NGOs. Starting with reforms on less contentious themes, such as business environment, modernisation or even legal frameworks as it was the case in the Philippines, is another way to move forward more discreetly. Adopting a more positive narrative prevents putting the parties involved on the defensive. Examples from Cameroon and Madagascar’s customs sectors and Tunisia’s port authorities, suggest that dropping the ‘anti-corruption’ frame altogether in favour of ‘digitalisation’, ‘modernisation’ or ‘productivity’ can lead to more effective anti-corruption.

In sum, there is promise in both the visible and the discreet methods for anti-corruption. There are many more lessons learned and avenues that donors can take in their fight against corruption, and they can be more or less visible to the eye of the people residing in the country they are seeking to support. However, at the start of another year likely to see many grand statements about fighting corruption, it is worth keeping in mind that what happens below the radar may be just as important as what happens above the surface.

ECDPM is an independent think tank that seeks to make policies in Europe and Africa work for inclusive and sustainable development.

Martin Ronceray (@MartinRonceray) is a policy officer at ECDPM, working on governance and how countries can make their policies more coherent.

A previous version of this article was published on its website. The views are those of the author and not necessarily those of ECDPM.

“Borrowing boats to go out in the ocean”: The influence of China and Russia in Africa