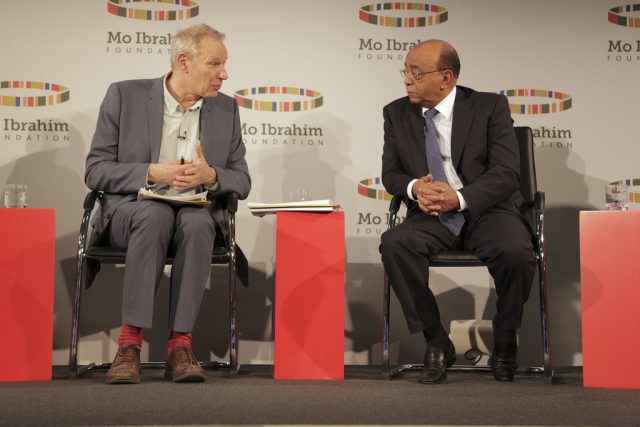 Luisa Porritt shares and explores with us some of the big issues tackled at this week’s conversation on the 2016 Ibrahim Index of African Governance, hosted by the Mo Ibrahim Foundation. This year marks the 10th anniversary of the index. Luisa is a writer and adviser on political economy. She is also a visiting tutor at Royal Holloway, University of London.

A decade since the launch of the first Ibrahim Index of African Governance (IIAG), there is modest cause for celebration. According to the measures compiled by Mo Ibrahim and his team, on average governance across the continent has improved—albeit by only one point. This may not appear staggering, but extremes skew the picture. Libya for example saw the biggest decline in overall governance by 18 points, dragging down the entire index, Ibrahim told the audience at the launch of the 2016 report. Ten countries have meanwhile seen overall governance improve by five points or more, with Côte d’Ivoire registering the biggest rise over the decade of 13.1 points.

Ibrahim thinks commentators who worry about the impact of low commodities prices, and Presidents seeking to extend their time in power by a third term, may have overlooked another concern: the decline in safety and the rule of law across almost half of the continent. Within this category, he explained, personal safety and national security saw the greatest decline, while indicators on the rule of law did not change much. Such problems can be addressed with the support of careful interventions, thinks former U.S. Assistant Secretary of State for African Affairs Jendayi Frazer, who said at the launch that she is optimistic about the continent’s prospects once this has been dealt with.

The starkest warning came from Donald Kaberuka, former President of the African Development Bank. African economies are at risk of following the development models of countries such as Brazil and China, by focusing too much on headline economic growth and not enough on distribution and inclusion, he said. While real incomes have been increasing across the continent, there is a perception that governments have placed less emphasis on tackling poverty reduction.

Too much emphasis on economic growth may have been at the expense of an improvement in living standards. Child mortality rates have dropped and school attendance has increased, but educational outcomes have been falling, said Kaberuka, adding this could create a problem in 10 years’ time when the ‘demographic dividend’ starts to emerge.

Of the four categories of governance measured, aside from the decline in safety, the IIAG found progress has been slowest in the area of sustainable economic opportunity. Again, there is cause for some optimism: 70% of Africans have seen an improvement in this area since 2006, driven largely by infrastructure development. But only 10 countries demonstrated improvement in all four sub-categories of sustainable economic opportunity, while 15 recorded a decline. Progress towards the digital transformation has occurred all over Africa, said Kaberuka, but electricity generation capacity has been lagging.

This failure by African governments to provide basic services and economic opportunities points to a weakness of the index itself, which places more emphasis on effective government than on democratic participation. Ibrahim is keen to point out that participation and human rights is one of the four categories that the index examines, but the nature of the weightings means that countries such as Rwanda and Kenya are ranked 9th and 12th respectively for overall governance, despite growing concerns over a marked decline in civil liberties and political freedom in both countries. Both countries received comparatively lower rankings on participation and human rights; Kenya was 17th and Rwanda 28th.

The latest assessment of Kenya by Freedom House, which focuses on political freedom and civil liberties, found “major concerns regarding civic space, human rights, corruption and rule of law”. This year’s Freedom in the World report also identified a downward trend for Rwanda, thanks to the constitutional amendment allowing President Paul Kagame to run for three more terms.

Despite the general trend towards better governance, a number of African governments still need to address basic challenges in education, health, the availability of power, and poverty. In a blistering attack on Africa’s oil-exporting countries, Ibrahim asked whether “the flood of money” from oil had resulted in anything useful. “Absolutely not”, he said, describing the 13 years of revenues generated from higher oil prices between 2000 and 2013 as “a missed opportunity”.

It is no coincidence that 10 out of 14 of Africa’s oil-exporting countries also rank in the bottom half of the IIAG in the category of participation and human rights. Until democratic participation is increased, socio-economic conditions for the broader population are unlikely to improve.