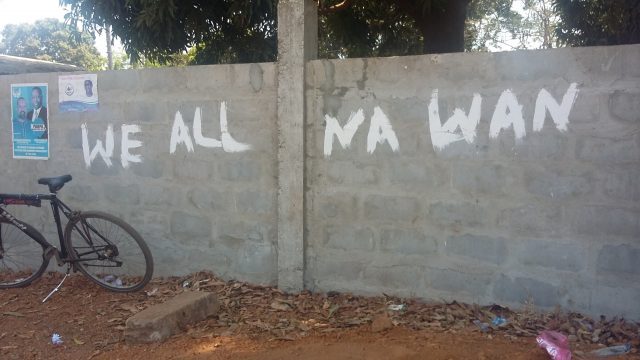 In the final of a two part series on the Sierra Leone elections, now that the run-off results are in, Laura Martin reflects on why the SLPP pipped the APC to the post, and the challenges that await President Maada Bio.

On 4 April 2018, the final results for Sierra Leone’s presidential election were in: Sierra Leone People’s Party (SLPP) presidential candidate Julius Maada Bio won the runoff election against the All People’s Congress (APC) incumbent party candidate Samura Kamara by over 92,000 votes (51.8%). Maada Bio also won the first round, but by a much smaller margin (only 15,000 votes), which left many people wondering whether he could really pull off a final victory. So how did it happen? And will Samura Kamara’s court appeal change anything?

According to the Sierra Leone constitution, the run off is supposed to take place no later than two weeks after the final results are announced. The runoff campaign period was markedly tenser than prior to the first round, with reports of violent skirmishes across the country. In one area I worked in Freetown, the newly elected SLPP parliamentarian was attacked and injured by APC supporters. In Bo, a city in the south, there were violent clashes between different party members in the market. There were also attempts by some campaigners to mobilise ethnic ties in an effort to get votes*.

Media coverage has suggested the voter turnout was much lower in the second round, in part due to increased security and police presence. Overall though, the first round saw 84.2% of registered voters at polling stations, while the second round was only down slightly at 81.1%. However, when taking into account invalidated votes in both rounds, there were actually over 9,000 more valid votes in the second round. If broken down by district, turn out and voter preference were roughly the same in each district for the first and second rounds, with the exception of the two swing states, Kambia and Kono.

These states were quite possibly the biggest factor in Bio’s win, where two other presidential candidates had been advantageous in the first round. As previously discussed, the National Grand Coalition’s Kandeh Yumkella was the preferred candidate in the Northern district of Kambia, while the Coalition for Change’s Samuel Sam-Sumana had huge support in the Eastern district of Kono. It is notable that neither candidate endorsed either the SLPP or the APC. Shortly before the runoff though, rumours on social media were alleging that Sam-Sumana was intending to endorse the APC. His supporters in Kono quickly responded in an open letter in a local newspaper, stating that regardless of his endorsement, Kono people would be supporting the SLPP.

And indeed, they did. In analysing the first and second round results, the biggest surge for the SLPP by far came from Kono. With Sam-Sumana out of the picture, the SLPP tripled their gain from the first round: from 30,000 to over 91,000 votes, accounting for over 70% of casted votes in Kono. The APC only received a 6,000-vote increase from the first round, from 28-34,000.

In Kambia too, the voters who did turn out transferred their votes to both the APC and SLPP. While the APC did get the majority votes in Kambia with 68%, they only increased their votes by 27,000 (from 42-69,000). Meanwhile the SLPP again tripled their voter based from 10,000 to 30,000. If the APC had managed to pick up more voters in this area the election may have been a lot closer. Voter turnout was only 65% in Kambia, a 10% drop from the first round and so it can be inferred that many of Yumkella’s supporters decided not to vote. What can be concluded though is that the ‘third party’ factor ultimately proved crucial in helping Maada Bio win the election.

The coming months will be a challenge for Maada Bio. First and more immediate, the day after Maada Bio was sworn in, his APC opponent, Samura Kamara, announced he would be challenging the results in court. Frankly, I do not believe these allegations will amount to anything. An APC parliamentarian, Ibrahim Sorie Koroma, brought similar allegations of electoral fraud forward the week before the run off was set to take place. While it did result in a temporary injunction and 4-day delay in the runoff, the court did lift the injunction and proceeded with the election. If this injunction had not been lifted, it could have created a chaotic situation whereby the entire electoral process could have been derailed: electoral missions may not have agreed to help run or re-run another election, Koroma could have stayed president indefinitely, and even if there was an election re-run, the SLPP may have boycotted it, citing unfair treatment in the first round. In other words, if the courts intended to corroborate with the APC to hijack the election, this would have been the time to do it, and they did not. This precedent leads to me to believe the courts will uphold Maada Bio’s win. The voting margin (well over 90,000) is substantial enough that even if there were irregularities, it will be difficult to prove that these were so numerous that Kamara could have won.

Sierra Leoneans also generally seem to keen to move on from “election time,” and I am not sure the courts are any different. I do not think they have a vested interest in one candidate or the other particularly. Sierra Leoneans have, more practically, expressed that they are just happy to “get back to their normal lives” for now. Many people complained that business in both the private and public sector has been put on hold the past month and so they are just looking forward to getting back to work. Politics is viewed by many as an “event” that occurs every five years, only when elections happen. Market women I spoke with often said they do not see their local MPs or councillors outside of election time. Will the Maada Bio era usher in new changes, with more visible politics, or will the disillusioned status quo remain?

The longer-term issue will be the fact that the SLPP does not have a majority in parliament. While these results are yet to be finalised in some constituencies, it is clear that the APC has significantly more MPs, which will pose a challenge for Maada Bio to even get cabinet members confirmed, not to mention bills passed. While I would optimistically like to believe this might force politicians to work together and compromise, I fear this could result in a very long five-year stalemate. Maada Bio has an uphill battle ahead, both in both policymaking and politicking. Sierra Leoneans seem cautiously optimistic that changes are coming, but we will have to wait to find out.

*Note that Sierra Leone does not have conflicts between different ethnic groups. This only seems to come up during election time, but “tribal rhetoric” is frequently shorthand for regional, North or South, ties, not particular groups.