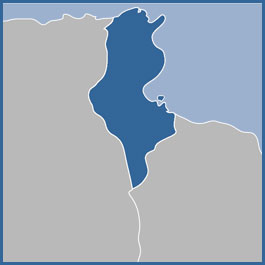 In this blog, Francesco Cavatorta and Fabio Merone reflect on the trajectory of the Nahda party in Tunisia. Unlike the Islamist parties in many other Arab states, this party has becoming increasingly moderate since its inception. What can we learn from Nahda? What does their experience tell us about the fate of Political Islamism and democratisation? Francesco works in the Department of Political Science at the Université Laval, Canada. Fabio works at the Gerda Henkel Foundation, in Dusseldorf, Germany. The full account of this research was recently published in Democratisation.

For most analysts and commentators today, the hopes of democratic change that the Arab Spring generated have transformed into a nightmare. The military successes of violent Islamist movements such as the Islamic State, the collapse of state institutions and borders in a number of countries, the breaking out of brutal civil wars, the flaring up of the Palestinian-Israeli conflict, and the rise in sectarian tensions are some of the most glaring problems affecting the Middle East and North Africa (MENA).

This is not what the Arab Spring was supposed to bring about. While it is true that the early enthusiasm onlookers showed for the protesting crowds and their demands in the first throes of the uprisings was somewhat misplaced – demands were never really only about setting up liberal democracies – it is equally true that very few predicted that the region would become as unstable as it is today. One should not forget, of course, that at least some of the security issues facing local and international actors are the by-product of the 2003 US invasion of Iraq and political mistakes made in its aftermath. But in any case, the MENA today is again the focus of both scholarly and policy-making attention.

Central to all of this is Islamism or Political Islam. Definitions of this concept abound, but the one provided by Guilian Denouex retains general validity. He refers to ‘the rise of movements and ideologies drawing on Islamic referents – terms, symbols and events taken from the Islamic tradition – in order to articulate a distinctly political agenda.’

The most interesting part of Denouex’s definition is that it does not tell us anything about three crucial factors. First, there is no indication of the means such movements intend to actually employ in order to implement their agenda – violence, the democratic game, grassroots social activism, or a combination of all the above. Second, the agenda contains little specific content aside from very vague references to the creation of a genuine Islamic state – which might mean very different things to different people – and to the introduction of sharia law – which can be interpreted in so many different ways that it becomes virtually impossible to singularly define. Finally, it does not tell us much about the Islamic referents movements utilise in their ideological discourse, which, in light of the philosophical centuries-long disputes among Islamist scholars and ideologues about the creation of a just society, is highly problematic.

It is for these three reasons that scholars of Islamist parties and movements tend to analyse them in great depth and generally avoid bunching them together. While both ideological and concrete linkages certainly exist between movements in different countries – one can think of the global reach of the Muslim Brotherhood –, it should also be underlined that the national context within which each party or movement operates has a crucial input on its behaviour.

If anything, the Arab Spring has had the merit of clearly illustrating the divisions within the broad ‘church’ of Islamism. While very few expected Islamist movements and parties of Salafi inspiration to embrace democratic mechanisms, and even less believed that democratic change would lead to the progressive marginalisation of violent al-Qaeda style extremists, much hope – both in the region and crucially at the international level – was pinned on the ‘moderation’ of political parties linked to the Muslim Brotherhood. In countries where free and fair elections would take place following the uprisings, it was expected that these parties would do either well or very well. In doing so, they would have the opportunity to demonstrate their commitment to democratic procedures, as well as the onus of providing the necessary leadership to consolidate democracy and not taking advantage of their powers to institute a different type of autocratic regime.

For reasons not entirely of its own making, the Egyptian Muslim Brotherhood – despite or possibly because of its control of both the presidency and the legislature – failed to play such a stabilising role. For its part, the Egyptian military reverted to type and, admittedly under a degree of popular pressure, ended the democratic experiment. This failure was overwhelmingly greeted as the demonstration that Islamism – and, for many, Islam – did not mix well with democracy. Islamists, commentators argued, would not moderate their radical demands and objectives. This was a view paradoxically shared by both Western policy-makers condoning the actions of the Egyptian military and hard-line Islamists who never believed that the way to radically change society was to hold elections. In short, Islamists of all hues were deemed incapable of moderating, meaning that they were unable to fully accept democratic procedures and liberal freedoms.

The issue of political moderation has attracted significant attention in political science since the successful integration of left-wing extremist parties into democratic institutions in post-World War II Europe. It was argued and hoped that many Islamist parties would do the same if given the opportunity; the collapse of authoritarianism in Tunisia, Libya, Egypt, and Yemen represented such an opportunity. It seems today that the only country where an Islamist party has played a positive role in consolidating democracy is Tunisia.

There are two issues though worth exploring in this respect. First, the moderation of the Tunisian Islamist party, Nahda, did not occur after the Arab Spring, but at least two decades, if not three, earlier. Second, its moderation was not the product of integration into the system. In our research we argue that its moderation needs to be accounted for differently: what we are seeing here is not ‘moderation through inclusion’ but rather ‘moderation through exclusion’.

The reference here is not only to the state’s repression of the movement through imprisonment and exile, although this occurred on a large scale. The reference is more to a sort of societal rejection of the party: The specifics of Tunisian socio-political development meant that the Islamist movement had to go through a profound re-elaboration of its initial political principles and concepts in order to avoid being perceived as alien and irrelevant. In many ways, the Tunisian national context shaped the Islamist party to a significant extent, leading it to play a crucial role in the stabilisation of the country after Ben Ali’s departure in 2001.

Contexts similar to those found in Tunisia did not exist anywhere else and this, in part, explains why similar political parties failed, quite spectacularly, to emulate Nahda. The upcoming Tunisian elections of October 2014 are unlikely to smile on Nahda, which, for many ordinary Tunisians, has not performed well in power. However, the very fact that elections are going to be held for a second time in three years is a great achievement in itself: all Tunisians and Nahda too should be proud of that.