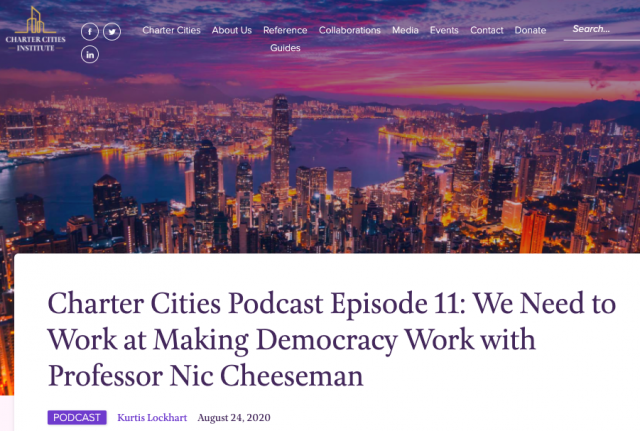 Our very own fromagehomme has been interviewed by the great team at Charter Cities, in a wider ranging discussion that takes in most of his work over the past decade, from how to combat corruption through to how to stop election rigging and beyond! The Charter Cities team work on how to build the “future of governance for the cities of tomorrow” . For more links and the full transcript of the interview and to find out more about their important work head over to their excellent website.  You can listen to the whole interview here:

Tocqueville said, “We need to work at making democracy work.” That is the springboard from which this episode begins. Kurtis Lockhart fills in for Mark Lutter as today’s host, and our guest is Professor Nic Cheeseman. Nic is a political scientist at the University of Birmingham, and was formerly the head of the African Studies Center at Oxford University. His research focuses on a range of topics, from democracy and elections, to development and institutional change, all of which we will discuss in this episode. Nic is the author or editor of ten books on African Politics, including Democracy in Africa: Successes, Failures, and the Struggle for Political Reform and How to Rig an Election. Nic shares with us some of the projects he is working on, and we discuss anti-corruption messaging, foreign aid, China in Africa, and redrawing African countries’ borders, as well as invisible election rigging, “sweet spot” strategies, and counterfeit democrats.

Key Points From This Episode:

•   Nic shares the projects that he is working on, including one on elections and COVID.

•   The value of redesigning messages rather than reinforcing the scale of the problem.

•   Nic’s concerns about the Department for International Development being merged into the foreign office body.

•   The only thing Nic thinks will counter the significance of China in Africa is bigger investment.

•   What Nic thinks the international development community should prioritize – do less, better.

•   How Tocqueville’s writings on democracy have helped shape some of Nic’s thinking.

•   Why Nic believes that Jeffrey Herbst’s suggestion to redraw borders in Africa is unfeasible.

•   What Nic is interested in about cities, and his views on urbanization, and urban or rural bias.

•   What has made Lagos such a successful city and how other African cities can follow suit.

•   Why invisible election rigging is one of the biggest challenges to contemporary democracy.

•   Sweet spot strategies include gerrymandering, the exclusion of a rival candidate, and so-called subtle violence or intimidation.

•   Nic is worried that other governments will learn subtle intimidation and use it to win elections.

•   Going from high-level thinking about institutions to actual on-the-ground implementation when one constantly has to worry about “counterfeits.”

•   Democracy in Africa’s collaboration with The Continent, a free newspaper in partnership with The Mail & Guardian, South Africa.

UPCOMING WEBINAR: African MPs: Out of touch elites or put upon servants?