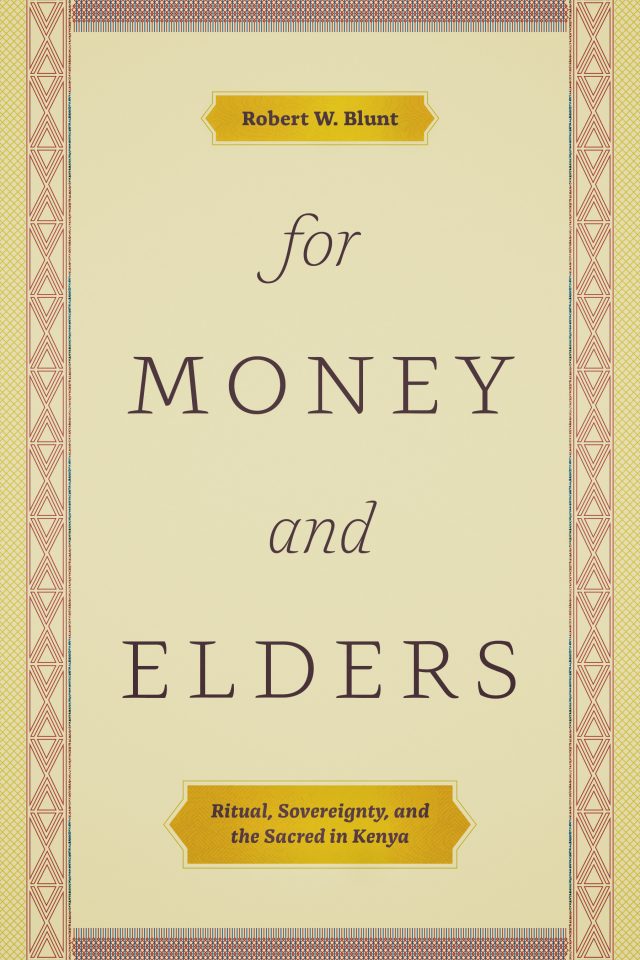 How is elderhood performed in contemporary polities in Africa? Is it something unachievable for the ‘youth’ due to economic hardships or it is a residue of colonialists’ indirect rule strategies? Robert Blunt explores these questions and leaves us pondering – are elders still relevant in the politics and governance of African countries?

For Money and Elders: Ritual, Sovereignty, and the Sacred in Kenya is a historical anthropology of religion and politics framed by a reexamination of a classic anthropological category—what Igor Kopytoff once called “the eldership complex” in East and Central Africa. So: why elders, and why now? After all, the mid-twentieth century heyday of anthropological studies of eldership now seems well past. With the exception of Richard Werbner’s Reasonable Radicals, current anthropological discussions about Africa tend to neglect elderhood as both an ethnographic and analytic category. In the substantial literature on African “youth” for example, elderhood more often than not simply marks a lack—something unachievable for “youth” due to prevailing economic conditions.

While such arguments are not wrong per se, they fail to attend to how elderhood is performed. This is remarkable, since the postcolonial period has seen the widespread entrenchment of the autocratic rule of “old men” over increasingly youthful populations, and the saturation of everyday life by images and vocabularies of old age throughout the continent. One of the main goals of For Money and Elders, then, is to shift discussion back to a critical historical anthropology of elderhood. In this respect, the book does not presume the naturalness of the category of elderhood as a structure of the longue durée in Kenya, but shows how it has become a modern political category, rooted in the misapprehension of Kikuyu understandings of elderhood and sovereignty by colonial administrators and missionaries.

Elderhood is Recent and Christian

The book argues that colonial administrators and missionaries couldn’t think beyond a notion of sovereignty deeply rooted in Christianity characterized by a centralized, self-identical (I am that I am) giver of laws and dispenser of violence (cf. Marshall 2014: 352). But such an understanding of sovereignty was not present in pre-colonial Kikuyu society, which can heuristically be described as “acephalous,” lacking a centralized juridical agent. As the book goes on to show, it is through the historical articulation of Euro-Christian and “acephalous” notions of sovereignty originating in colonial processes of indirect rule that shaped postcolonial understandings of elderhood as a modern political category in fundamental ways.

To do this, the book examines two historically linked modalities of gerontocratic power and rule in Kenyan history.  The first is the administration of ritual oaths as a “sovereign rite” of elderhood amongst the Kikuyu (Kenya’s most populous and powerful community) under colonial rule. As the book shows, the mystical capacity to bind word to deed was not a feature of elder sovereignty, as early ethnographers and colonial administrators believed. Rather, this sovereign power was understood as an extra-social force (called thahu) that could overwhelm those elders who sought to deploy it for socially adhesive ends. The underlying semiotic ideology of these oaths was therefore very different from British legal oaths whose “force” allegedly emanated from a centralized, divine lawgiver and judge.

In contrast to the political philosophies of Walter Benjamin, Jacques Derrida, and Giorgio Agamben, For Money and Elders historicizes this Euro-Christian conception of sovereignty by examining the different powers that various social actors—the colonial state, Mau Mau guerillas, and the postcolonial nation—have ascribed to elders in colonial and postcolonial contexts “structurally dependent on male labor, male state figures, and a state cast as male” (Smith 2014: 25). The book’s critical engagement with classic Africanist political anthropology thus seeks to transcend the ahistoricism of both philosophers and colonial administrators by looking at ritual oaths in Kenya as an historical form.

Initiated by Kenya’s first president Jomo Kenyatta, the second modality of gerontocratic power the book analyzes is the performative “control” (by elders of the state) over the efficacy and value of official signs, especially national currency. Such efforts at elder control, the book argues, are most legible in moments Kenyans experience as instances of its crisis. That is, in moments when the capacity of elders to “back” the truth value of officials signs appears not to be working: in the colonial era Kikuyu concerns about potentially fake ritual objects; in the dynamics of supplementary violence and symbolic proliferation in Mau Mau oathing rituals; in public anxieties about Satanism with the advent of neoliberalism; and in attempted justifications of Kenya’s 2007-2008 post-election violence.

The issue of violence here is crucial. As the book shows, such performative ritual attempts to shore up elder authority become subject to the same crisis of meaning and value that they seek to address. And in such moments of generalized semiotic crisis or failure, a supplementary violence can seem to be an expedient technique for the reconstitution of the sovereign capacity of elders—itself, recall, a product of the colonial articulation of a Euro-Christian notion of sovereign function to a fundamentally “acephalous” one. A recursive logic emerges, in which different iterations of crisis around elderhood and signs of the state accumulate, repeat, and transform over time.

On a more theoretical level, For Money and Elders seeks to move beyond Talal Asad’s (1993) influential critique of “religion” and “ritual” as anthropological categories. For Asad, the Christian genealogy of these categories makes them translationally or analytically problematic. By contrast, my goal is to demonstrate the empirical consequences of the imposition of such categories not as analytic error but as an actual social and historical process. In this way, For Money and Elders demonstrates what Achille Mbembe has described as the main “tragedy of colonialism:” the historical development away from multiple forms of marriage, divinity, and currency, towards what he calls the “paradigm of ‘the one’, the monotheistic paradigm.”

Robert Blunt is Professor of Religious Studies and Africana Studies at Lafayette College in Easton, Pennsylvania. His book For Money and Elders: Ritual, Sovereignty, and the Sacred in Kenya is forthcoming from the University of Chicago Press in October, 2019.