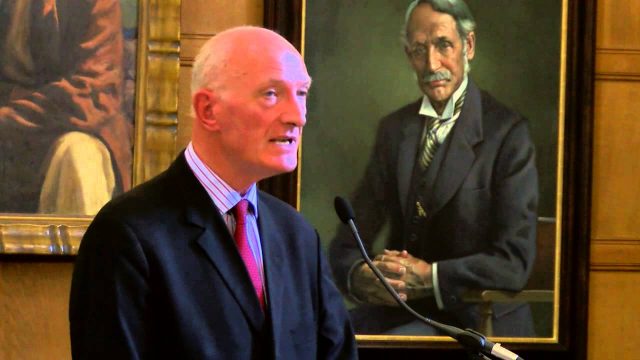 The annual Bram Fischer Memorial Lecture was given this afternoon by Justice Edwin Cameron, who spoke on Fidelity and Betrayal under Law. The memorial lecture is in honour of Bram Fischer QC (Orange Free State & New College 1931), who defended Nelson Mandela and other leaders of the liberation movement when on trial for their lives, and who himself died in imprisonment in 1975.

Justice Cameron’s lecture considered the compromises and complexities of Bram Fischer’s life, and his struggle for justice in conditions of imperfection. One of the key themes was the importance of dissent and Bram Fischer’s commitment to seek justice in law. Justice Cameron also spoke on the implications for South Africa today, and considered Bram Fischer as a lawyer who believed in justice, dignity and the ability of law to lead to positive change. He urged the audience to consider the historical context as a call for modern day change: “Bram Fischer’s courageous life invites each of us to ask ourselves: what is the ambit and the power of my challenge to injustice? What is the issue of my dissent? It is not good enough to look back in comfort. That backward glance, at Bram Fischer’s courageous stand for justice, should induce in us deep discomfort.” Justice Cameron concluded that: “We have the conditions for continuing our just transformation, for taking it far further. And we have the social restiveness, the constitutional apparatus, the principles and values to achieve it. Bram Fischer’s legacy demands that we persist until we have done so.” The full lecture can be read here.

After the lecture, a Picasso print was raffled as a fundraising event to support of the work of the Alliance for Lawyers at Risk, which draws on the expertise and resources of the British legal profession to link with lawyers at risk abroad. More about their work, and that of Peace Brigades International can be read here. The print was donated by Dr Frederick Mulder CBE, who is a global expert in the field of European printmaking 1470-1970, with particular expertise in the work of Picasso. He has worked as a private dealer in this field, based in London, since 1968. He established the Frederick Mulder Foundation in 1986. His philanthropy focuses on climate change, inequality and the persistence of global poverty, and social change. He has played a key role in encouraging others to give through his work as founder of The Funding Network and co-founder of The Network for Social Change. He was awarded the SPEARS Lifetime Achievement Award in Philanthropy, 2012-13 and he is a valued supporter and funder of PBI.

The Rhodes Scholarships have a distinguished history of producing top South African lawyers, and agents of social change. Several played a prominent role in fighting the apartheid system, including Bram Fischer himself, Kumi Naidoo and Shaun Johnson.

Justice Cameron trained in law at Stellenbosch University and during his time as a Rhodes Scholar in Oxford, before practicing law at the Johannesburg Bar. From 1986 he was a human rights lawyer at Wits’s Centre for Applied Legal Studies, where in 1989 he was awarded a personal professorship in law. His practice at this time included labour and employment law; defence of African National Congress fighters charged with treason; conscientious and religious objection; land tenure and forced removals; and gay and lesbian equality. In October 1994, President Nelson Mandela appointed Justice Cameron as an acting judge of the High Court to chair a commission of inquiry into illegal arms sales. He was appointed permanently to the Witwatersrand Local Division in 1995 before being appointed to the Supreme Court of Appeal, which he served for eight years. President Kgalema Motlanthe appointed Justice Cameron to the Constitutional Court, taking effect from 1 January 2009 and he has been described as a “jurist of the highest order”.