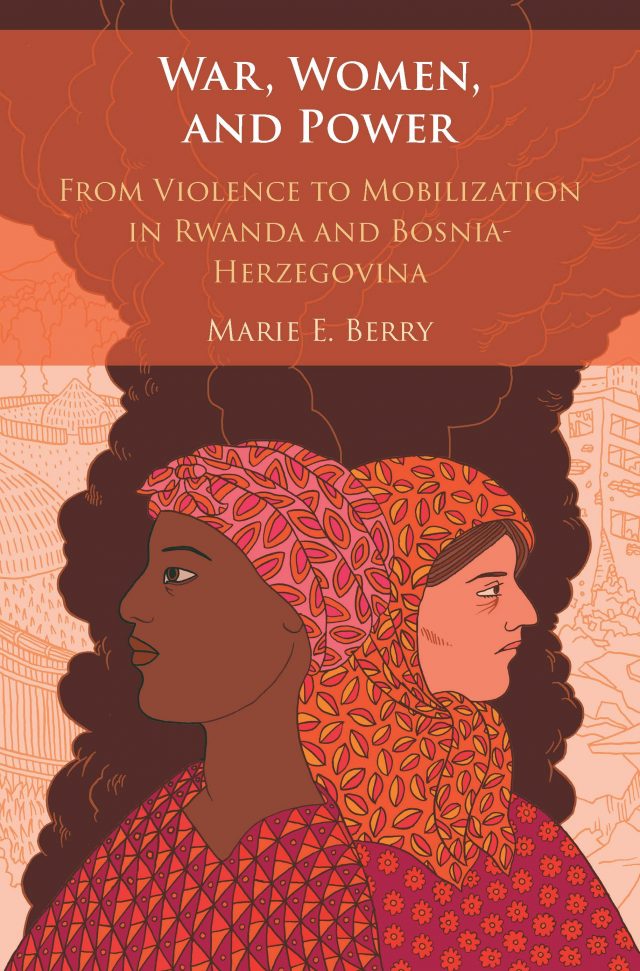 How do women experience war? Does war reconfigure gender power relations? Marie E. Berry explores these and other questions in her new book: War, Women, and Power: From Violence to Mobilization in Rwanda and Bosnia-Herzegovina (Cambridge University Press, 2018), in which she argues that war can reconfigure gender power relations by catalyzing women’s political mobilization.

We know that war is destructive: it devastates lives, drains economic resources, shatters infrastructure, and upends political systems. Yet alongside the destruction, war is also a period of rapid social transformation, when the status quo is in flux.

In this new book, War, Women, and Power: From Violence to Mobilization in Rwanda and Bosnia-Herzegovina, I explore how women experience war, bear witness to its effects, and exert agency in ways often obscured by analyses of violence that emphasize women’s suffering and victimhood. Drawing on the cases of Rwanda and Bosnia-Herzegovina, I argue that war can reconfigure gender power relations by catalyzing women’s political mobilization.

The book draws on interviews I conducted with more than 260 women in Rwanda and Bosnia-Herzegovina. Their stories show that while war is devastating for those that live through it, it can also precipitate a series of interrelated and overlapping structural shifts. These include: (1) a demographic shift due to the disproportionate death, conscription, and imprisonment of men, and the massive displacement of people from their homes; (2) an economic shift, due to the destruction of infrastructure, agricultural capacity, and the arrival of international humanitarian aid; and (3) a cultural shift, due to the reconceptualization of women as legitimate political actors, as some women’s groups strategically juxtapose their “more peaceful” nature against men’s propensity for war. Combined, I argue, these three shifts lead to women’s increased political mobilization.

In this book, I call for analyses of women’s political participation—especially in conflict-affected places in Africa—to consider what constitutes “politics” through a feminist framework, with an eye to seeing women’s political mobilization in spaces outside of the formal political realm. This is because after the upheaval of war, people take on new social roles intimately tied to survival and the ordinary activities of daily life, such as securing food from distribution centers or navigating local government for information about missing loved ones. As thousands of people face similar circumstances, such daily activities can accumulate and impinge upon the established gender order. In both Rwanda and Bosnia, women’s new roles in their households and communities led them to make small claims that became “stepping stones” for further claims, and eventually generated new opportunities for women to form community organizations that became spaces for women to claim rights and organize politically outside of traditionally male-dominated political realms. These organizations ultimately formalized a new structure of women’s leadership at the local level and provided a platform for some women to launch political careers.

At the center of the book is a question about the durability of women’s gains after war. As many scholars have found before me, women’s gains during war are often reversed in the post-war period. I find similar setbacks to women’s gains in Rwanda and Bosnia due to three key processes.

First, political settlements mattered profoundly for the durability of women’s gains—although not always for the reasons we might think. Beyond the fact that women’s exclusion from formal peace negotiations or political offices can lead to their marginalization and a reassertion of patriarchal politics, the political settlement in both Rwanda and Bosnia produced a hierarchy of victimhood, in which people with particular war experiences were determined to be deserving of political status, while those with other war experiences were erased and cast out from acceptable political spaces. Certain deaths and forms of sufferings were made grievable—to use Judith Butler’s word. In Rwanda, this meant that those who were Hutu, or who suffered at the hands of the Rwandan Patriotic Front (RPF), were not allowed any victim identity. This resulting in an “insidious silencing” of suffering, as Kate Cronin-Furman recently noted, which facilitated new social divisions and undermined the possibilities for a cross-cutting women’s movement.

Well-intentioned international aid efforts also undermined women’s gains, as INGOs distributed aid on the basis of victim identities proffered by the state. Moreover, international humanitarian actors prioritized technocratic knowledge over local expertise and erratically altered funding priorities with changing donor demands. This effectively neutralized the important role many women’s organizations were playing in their communities related to rebuilding, resettlement, and healing, as it required them to constantly reinvent their programming in order to compete for funding.

Finally, women’s gains were met with a revitalization of patriarchal norms in both places, as men sought to preserve hegemonic control in their households and communities. This resulted in a patriarchal backlash, where violence extended beyond the theater of war and entrenched itself in women’s daily lives.

A final set of concerns are unpacked in the final sections of the book. Of particular importance to scholars of African politics will be the discussion of the political logic behind efforts to secure women’s political inclusion. Focusing on the Rwandan case in particular, I discuss how the inclusion of women in formal politics can serve a politically expedient goal of legitimizing the democratic credentials of a regime to international audiences. While Rwanda has boasted the world’s highest level of women in its legislature since 2003, this supposed gender progress has masked ethnic consolidation and the entrenchment of RPF power.

Even further, women’s inclusion in government likely emerged as part of the regime’s strategy to “emasculate” the Rwandan civic sector, which effectively neutralized its ability to serve as an counterweight to the state. Many of the women in Rwanda who emerged as some of the strongest actors in the civic sector were eventually persuaded to join government. This left community organizations without dynamic leadership, and furthermore allowed the regime to replace strong community leaders with its own members, deepening the party’s control over civil society.

As I’ve written about with Milli Lake, we should be skeptical when democratic progress and women’s “empowerment” occurs against a backdrop of authoritarian practices more generally. Democratic participation and inclusionary governance strategies can be co-opted and instrumentalized by ruling parties to serve political ends. Women’s apparent gains can instead mask deepening gender equality and oppression.

Thus, while this book offers a framework for understanding the processes through which war can upend the gender order and catalyze women’s increased participation in informal political spaces, it also cautions against seeing these gains as evidence of durable, linear progress towards more gender-equitable futures.

Marie E. Berry is an Assistant Professor at the Josef Korbel School of International Studies at the University of Denver.