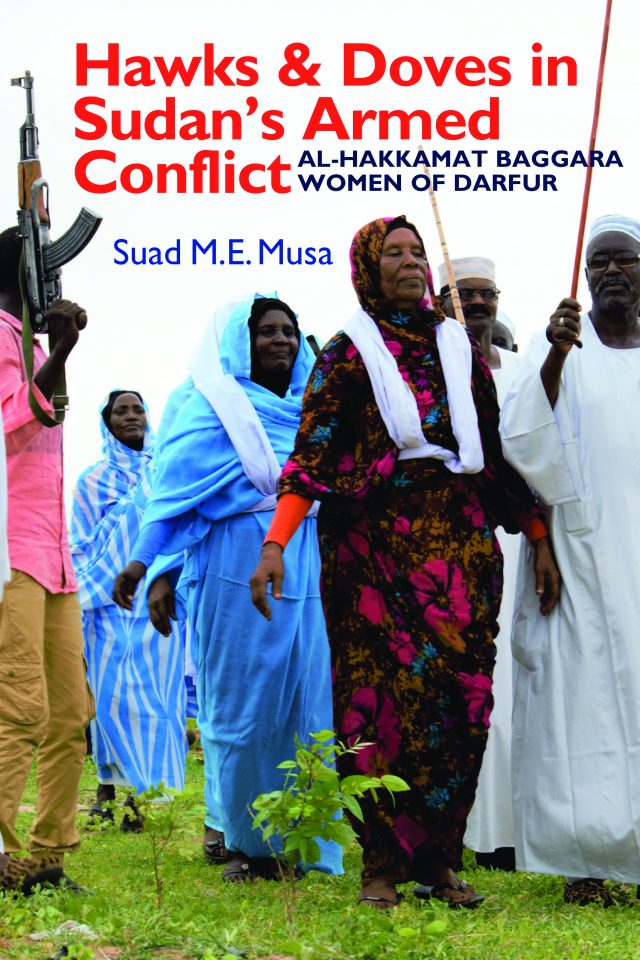 The DIA Book Club presents insights from Suad Musa’s new book, Hawks and Doves in Sudan’s Armed Conflict (James Currey, 2018). In this blog, she highlights the conflicted role of Al-Hakkamat Baggara women as both inciters of war and peace agents in the Darfur armed conflict.

The book, Hawks and Doves in Sudan’s Armed Conflict: Al-Hakkamat Baggara Women of Darfur explores the involvement of an influential group of women called al-Hakkamat (al is the definite article in Arabic) in the Darfur armed conflict. These women, al-Hakkamat, have been a bedrock in the social and political domains of their communities. Their appraisal ranges from a benign recognition of their merit as representing ‘a shadow of a big tree for their tribes’ to the elusive ‘double-edged sword’ entity that can force community members into compliance with an idealised image of their tribes. Al-Hakkamat are challenging patriarchal tendencies and can truly make or break men’s reputations. The book traces the sources of their signature traits of power, agency and political influence in a context of a patriarchal community beleaguered with a protracted armed conflict.

War and violence in Darfur

Darfur has been overwhelmed by a vicious cycle of violent armed conflicts between tribes and ethnic groups, as well as between Darfuri insurgents and the central government of Sudan. The civil war in Darfur, which started in 2003 resulted in a catastrophic humanitarian situation described at the time as the worst in the recent history of human suffering. Women and girls, in particular, suffered abhorrent atrocities and gender-based violence, such as rape and abduction. The horrific human rights violations committed in Darfur were labelled genocide and ethnic cleansing; and were followed by an ICC indictment in 2009 of the Sudanese President, al-Bashir, for war crimes his regime perpetrated in the region.

Both forms of violence occurred against the backdrop of the neopatrimonial and clientelist approach to domestic politics, policies and geopolitics played out by the riverine state’s governing elites in the political economy of Darfur, especially on land and natural resources. This affected historical legacies and claims to land ownership rights by tribes and ethnic groups and consequently provoked violent confrontations. They also led to significant deterioration in the livelihoods and security of Darfuri people.

The patrimonial politics exercised towards tribes and ethnic groups in Darfur combined with projecting the causes of conflicts into ethnic terms created divisions among already polarised Darfuris. Conflict between (agro-) pastoral Arab ethnic groups and the mostly sedentary farming indigenous African tribes overshadowed, at least locally, the politically motivated conflict. As the state turned a blind eye to enforcing law and order, conflicting tribal groups, were often obliged to take matters into their own hands to defend themselves.

In the case of the Baggara Arabs, their conventional defence mechanism, often a well organised military organisation known as the Ageed institution, would always be ready to spring to their defence. Along with the Ageed institution, al-Hakkamat, who often touch all aspects of the tribal life, play a vital role in such matters: al-Hakkamat incite and the horsemen fight. The book details the legacy of this group of tribal social actors and illustrates their deeply felt influence which often outweighs and transcends the impact of almost any of the other social actors in the social organisation of the tribe.

Al-Hakkamat are talented rural women folk poets of the Baggara and Abbala Arab tribes of Darfur and the region of Kordofan. The book attempts to demystify the often controversial but less documented status of these women in the context of the armed conflict in Darfur. It provides substantiated answers with demonstrated evidence to a raft of questions: who are these women? What is unique about them? What is their position in the social organisation of the Baggara society? What power and agency do they have or exhibit? How do they acquire it in the first place? How do they exercise influence and authority? Why and when would they be projected as such?

The Al-Hakkamat have established themselves in the political domain as a powerful and a reliable female institution of ethnic consciousness devoted to preserving the distinct ethnic, cultural and geographical boundaries of their tribes. In fulfilling their obligations, the book shows that they have become a ‘trigger’ factor in transforming tense situations into fully blown all-out wars. So, how has their warmongering role unfolded in the armed violence experienced in Darfur?

Since they took over in the 1989 coup d’état, the National Islamic Front (NIF), now the national congress party (NCP),  regime, driven by pan-Arabism/Islamism, has ventured into building alliances with the Darfuri Arabs and influencing their conventional institutions. Support of al-Hakkamat was solicited to co-opt them into the state’s military strategy of mobilisation. They were manipulated and exploited in enlisting horsemen, especially the youth, from the Baggara communities, as soldiers and para-military combatants to serve the government’s war campaigns in South Sudan (before the split in 2011), in Darfur, and elsewhere in Sudan. Voluntarily or expediently, some have also joined the notorious Janjaweed militias.

Al-Hakkamat and prospect for peace

Whilst al-Hakkamat were widely used in the war campaigns, whether by their tribes or the governing elites, they were, paradoxically, often dissociated from effective engagement in the peace and reconciliation processes attempted locally, nationally and beyond. The question to ask is thus why were actors so influential in inciting wars reduced to only decorative representation when seeking negotiations and peace resettlement? What implications does this have on reconciliation agreements that al-Hakkamat were not essentially happy with, and therefore, had no moral obligation to subscribe to? As the book indicates, al-Hakkamat would often reject the deals reached and incite for the resumption of hostilities and fighting.

Al-Hakkamat have defied all the challenges that led to the demise of most of the conventional foundations of power and authority for African women, for example, the female spirit mediums in Zimbabwe and thrived as figures to reckon with in the political domain.

By unveiling the often-overlooked role and contribution of al-Hakkamat women in shaping the armed conflict in Darfur, among other societal matters, this field-based book adds to the literature of conflict in Darfur, and to conflict resolution generally, a missing gender dimension in the form of dedicated women engaging in agitating for and igniting conflict, as opposed to the often-inadequate representation of women as peaceful or submissive victims. It alerts scholars and practitioners of conflict resolution and peace-building to reconsider the conventional models and approaches to sustainable peace and reconciliation such that actors such as these would be integral contributors to peace as much as they were to war.

Suad Musa (PhD) is a Freelance Consultant on gender and women’s issues. She worked with the government of Sudan and with CSOs and INGOs in the Horn of Africa and Britain. She also worked as Assistant Professor of Sociology at Qatar University.

Somaliland suspends relations with the United Nations amidst rising tensions