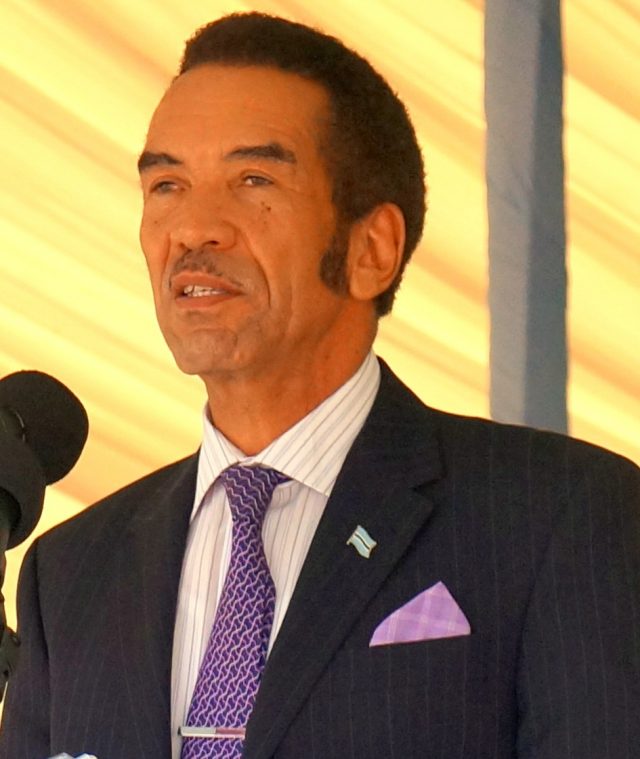 Kenneth Good looks back at the legacy of General Ian Khama, who has just announced that he will soon step down as president of Botswana, and concludes that the best thing about his time in office is that it is now over …

The best thing about General Khama’s presidency is that after ten years, 2008-2018, it is over, at least formally speaking. Structurally, in both the economy and society, it was notable for its failures.

Unemployment nationally was already serious, standing at some 17.8 per cent, but youth unemployment in early 2018 was 26.2 per cent, and this was especially hurtful to women and girls, for whom joblessness reached 31.2 per cent. Not only women, but the newly educated were hard hit. Research by two University of Botswana lecturers revealed that some two-thirds of the unemployed are under the age of 30. Graduates had to wait ‘a minimum of 4 to 6 months’, making on average at least 13 ‘contacts’, before landing their first job. Desperation and despair could easily lead to risky sexual behaviour. Utilising Aids Impact Survey findings, two other UB lecturers found that ‘most unemployed young adults are HIV positive.’ This inter-relationship was in no sense coincidental.[i]

Major economic decisions taken under the Khama presidency have also proved to be highly controversial.  For example, the closure of the Morupule B power plant in Palapye, and its projected sale, was expected to cost the country ‘up to P20 billion’, according to Sunday Standard investigators in July 2016.[ii] The closure of the BCL copper mine announced not long after, was similarly described by that paper as ‘a catastrophic error for which this country will be paying long after Khama has gone.’ BCL constituted the life blood of Selebi Phikwe, and its closure meant the likely end of the town. Yet according to the Standard’s ‘Watchdog’ on 14 November, President Khama ‘was nowhere to be seen’. But the town’s catastrophe was not bad news for everyone: as that reporter noted, ‘some business people including some Khama associates are pitching for the purchase of BCL.’

The dominance of diamonds

These and other socio-political problems relate to the dominance of diamonds in Botswana’s undiversified economy.[iii] They are also the main source of corruption, especially elite corruption in the country. Unrecognised in the benign perceptions of visiting businesspeople, it is in fact a structural feature of the secrecy built into diamond production and distribution in the hands of the multi-national corporation, De Beers, and its local partner, Debswana. From the outset and still today, ‘the structure of mining contracts, the exact value of extracted diamonds, Botswana’s 15 per cent shareholding in De Beers remain a closely guarded secret.’

The corporate structure of Debswana (jointly owned by Botswana and De Beers) ‘also operates through secrecy jurisdictions’ such as Luxemburg and the British Virgin Islands. Deep and pervasive political corruption flows from this nexus. ‘For a long time De Beers financed the ruling Botswana Democratic Party (BDP) through these secrecy jurisdictions.’[iv] President Ketumile Masire, and his cash-strapped farm, GM Five, benefited directly and repeatedly from De Beers financial assistance.[v] With reference to an unnamed recent study of Botswana’s diamonds, Ontebetse reports that ‘the disclosure of key information, and the removal of De Beers’ monopoly would liberate the economy and its democracy.’[vi]

The secrecy which contributed to Sir Seretse Khama’s longevity in the presidency has only escalated under General Khama. The Mo Ibrahim Foundation noted in late 2017 how government under Ian Khama has become ‘more dictatorial and less accountable, respect for fundamental human rights is being eroded, while corruption has gone up and the justice system is becoming less effective’.

Ex-President Festus Mogae allowed in 2008 that he did not know how General Khama would rule, but he told an American TV panel recently that “the present regime does not respect the rule of law: it is inward looking”. From the outset, the Khama presidency developed into a network of personal relations with the General ‘at the centre of everything’, exercising arbitrary power with impunity, according to Kenneth Dipholo.

Nowhere was this more evident than among Botswana’s proliferating spy agencies. For a country with no known enemies, these appeared to include: the Directorate of Intelligence and Security (DIS), Military Intelligence (MI), the Security Intelligence Services, the Central Intelligence Committee, Criminal Investigations Dept, Special Branch, Diamonds and Narcotics Squad, and the Tourism Intelligence Unit.

Of these easily the most powerful was DIS, tailored at the start of Khama’s presidency, by and for Khama, with the assistance of Colonel (now General) Isaac Kgosi. It is large, well-funded and totally unaccountable. On the 2017-2018 budget, DIS and the BDF were set to share P6.8 billion.[vii] An American scholarly analysis had earlier estimated DIS’ spending at $25, 677, 600, placing it 86th in the world among such agencies. Its personnel totalled in the thousands.[viii]

The architects of the DIS intended that the DIS was insulated from oversight. A nominal parliamentary oversight body, had never met since December 2014, and DIS never submitted a report to parliament, as was mandated in the ISS Act. It possessed in 2017 state-of-the-art electronic eavesdropping equipment enabling the agency to listen in to any form of communication. This represented ‘one of the most powerful technical capabilities in the region’. This capacity supposedly stripped Botswana’s opposition parties ‘stark naked’, and it could be what was needed to save the BDP from losing the 2019 general elections.[ix]

One of the most worrying phenomena to have emerged on the country’s streets is a spate of extra judicial killings. Numbers are unclear under conditions of fear and uncertainty, but the killing of John Kalafatis, on the evening of 13 May 2009, stood out: he was shot by state agents while sitting in a car in a public place. The Law Society of Botswana said: ‘The killing … showed a definite intention to kill an unarmed civilian who posed no threat.’ While inquests were once routinely held when civilians were killed, they noted, this had not happened in 9 of the 13 deaths by gunshot since Khama assumed office.

Known figures suggested then that at least 14 people had been killed between 2008 and 2010.[x] The numbers had risen further one year later, with in one case six police officers charged with killing Italy Setlampoloka on or about 29 July 2009. The overall trend is deeply concerning. Following a parliamentary question, the editor of Mmegi noted on 23 September 2011, that the ‘number of people who have gone missing … and never returned’ had reached ‘over 400’.

There is some agreement within legal and media circles about what President Khama has represented. For Dick Bayford, he was ‘nepotistic, corrupt and misuses government resources for personal and family gain’, and for the Watchdog, his governmental style was ‘reclusive, divisive, secretive and isolationist’, while he was ‘contemptuous of the media, civic society and the opposition.[xi] Over the ten years of his presidency he had not held one press conference.

Levers that protected his power and interests remained close to hand as his tenure ended. Isaac Kgosi, Director General of DIS, and a long-time ally, was due to retire, age 60, in 2018, but the President extended his position for five years, and bestowed on him the Presidential Order of Honour. Ahead of the 2019 elections, he retained his position as the BDP’s ‘Chief Campaigner’. Other military loyalists were appointed to senior posts in the Presidency and DIS.

This raises the question of how much influence Khama and his allies retain within the ruling party, despite his standing down. The president remarked more than once: “I am not going anywhere, I will still be around.”[xii]

[ii] There were approximately five pula to a US dollar in the early 21st century and the rate is some ten recently.