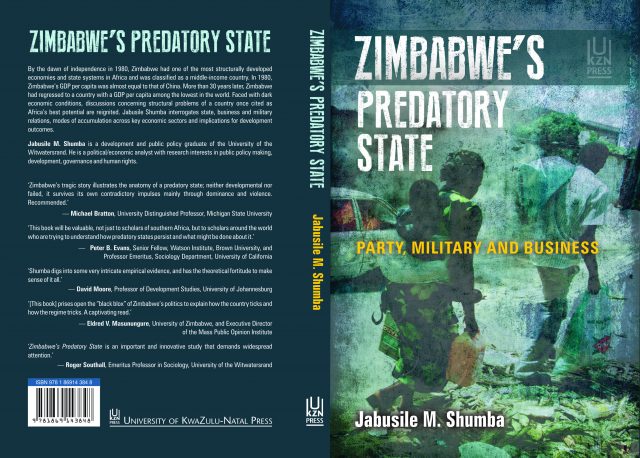 Zimbabwe digressed from the expectations of hopeful masses and many supporters of the liberation struggle project. From a very promising young state at independence, to the grisly images of violence, cataclysmic economic failure, poverty and suffering. Several questions beg answers: why did this happen? How did it happen? Did the ruling elite know their choices would lead to Zimbabwe’s developmental decline?

More recently, the county has experienced, for some a ‘coup d’état ’ and for others, long frustrated and keen to see Mugabe’s departure at all costs and could not stomach his wife taking over from him, the end justify the means. The later have preferred to view it as a ‘Military Assisted Transition’. Meanwhile, some and perhaps uncritically were surprised and have never budgeted, not an overdraft of the decisive military intervention in the intense battle to succeed former president Robert Mugabe.

Yet with hindsight, Zimbabwe’s developmental decline and the events in November 2017, triggered by the dismissal from government of Emmerson Mnangagwa – now the new president – and subsequent, military lock-down paving way for public pressure and a parliamentary impeachment motion that eventual forced Mugabe to resign, are not an accident.

In Zimbabwe’s predatory state: party, military and business, I explore some of the questions that might help to understand how and why we get where we are. I argue that the Zimbabwean state exhibits more predatory characteristics than other forms of state conceptualisation. However, the notion of the predatory state itself has remained an elusive concept. I differ with other advocates of the term who have appropriated it to mean the opposite of a developmental state, a special variant of criminalisation or a form of neopatrimonialism.

The consensus view from these contributions is that the predatory state is characterised by weak bureaucratic capacity and poor institutionalisation, which allows the ruling elite unconstrained access to and abuse of state power for personal gain. Yet, ironically, the term ‘predatory’ inherently denotes strength – that is, it implies the capacity of predators to prey on their targets, this requiring the strength to subordinate their victims. (For states, such strength arguably rests on bureaucratic capacity and institutionalisation through which the state is able to exercise control).

Through wide-ranging interviews with key actors in Zimbabwe (party, military, intelligentsia and business) and extensive archival review, I examine the underlying class forces, power dynamics and the modes of accumulation of the power elite: state, military and business across key sectors of the economy: land and agriculture, mining, banking, energy. Three overlapping and complimentary characteristics of the predatory state, society and business relations stand out: (1) party-state and military dominance in the state; (2) state business relations shaped by domination and capture and; (3) state-society relations shaped by violence and patronage.

Secondly, the implications of the absence of the manufacturing sector illuminate the deficiency of production strategies, a uniform feature across the sectors. In fact, the main aim of policy (such as indigenisation and empowerment programmes) is to channel rents to members of the ruling elite.

Thirdly, each sector reveals a different kind of extraction (from asset stripping in state parastatals to expropriation of farms), the benefits of which accrue to the military–political elite. And, finally, the state needs cooperation with foreign capital (in this case, Chinese and South African) to generate foreign exchange and tax revenue to support essential government functions. Therefore, foreign capital investors are allowed to participate in the sharing of resource rents.

The key conclusion from the book is not only that the power elite had class interests that inhibited economic transformation and development, but also that its voracious modes of accumulation and militarised political reproduction transformed and sustained Zimbabwe’s predatory state. And, looking through this prism one will also not wonder on the role of the military in Zimbabwe’s politics and the deepening militarisation associated with the appointment of senior military officers to instrumental positions in the post-November 2017 administration.

Lastly, I am neither a capitalist nor a prophet to make predictions, but the optimism of the post-Mugabe transition might be too early, there are far too many constraining legacies and structural issues to navigate and re-orient the state, business and societal relations towards a developmental coalition.

Jabusile Maddyazvimbisi Shumba is a  political and economic analyst with research interests in public policy making, development, governance and human rights. He is on Twitter at @jabushumba. Zimbabwe’s Predatory State can be purchased from Exclusive Books in South Africa and on Amazon.

Documenting Dictatorship: Truth and Reconciliation in the Gambia