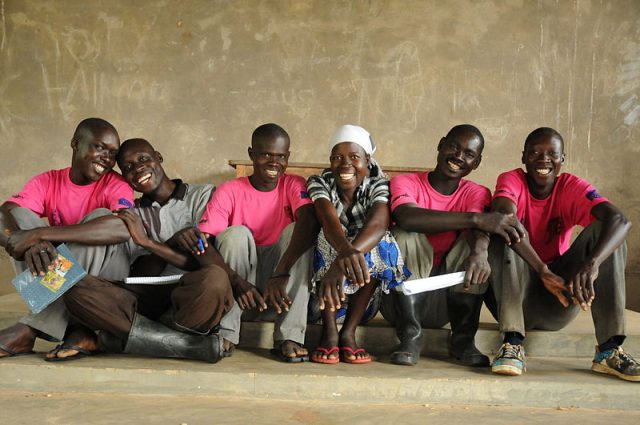 In this post, Matt Kandel argues that academics and policymakers – particularly those in the west – need to stop seeing young people in Africa as an undifferentiated group. Based on his own research in Uganda, Matt highlights some of the key generational, economic and political cleavages that lead young people to have highly divergent experiences, hopes, and opportunities. Matt is a British Academy Newton International Fellow at SOAS.

‘Bulge or dividend?’ ‘Ticking time bomb?’ ‘Risk or asset?’ ‘Time bomb?’ These are some of the common propositions that dominate debates on the future of youth in Sub-Saharan Africa. For me, at least, the implications of these propositions are far more philosophically compelling than analytically revealing, for they indicate an enduring preference for dualistic conceptions of social reality in human thought. The expansive gray middle ground—despite potential political costs—is neatly swept over.

Analytically, the propositions above are simplistic and cliché at best and fundamentally flawed and derisive at worst. They are also predictable. Social, political, and economic analyses of Africa often remain clouded by simplistic assumptions and narrow conceptions. Ultimately, we still tend to see homogeneity rather than heterogeneity within African societies. It is telling that national debates in the US do not focus on the political implications of disenfranchised ‘youth’ per se, for such discussions tend to be more appreciative of social heterogeneity. The focus might be narrowed to poor youth, urban or inner city youth, racial minority youth, or immigrant youth. In these cases, differences in class, ethnicity, religion, and citizenship are usually recognized, and ‘youth’ as a catch-all category is implicitly rejected.

The focal point of the debate on youth in Africa must shift. Discussions should be premised on a conception of African youth as a highly differentiated group. This is something I have observed since I began conducting research in Uganda. For instance, there are significant class differences within the youth segment of populations, which is evident across generations as well. This holds as true in the vast rural areas as it does in the urban, for despite common portrayals, not all ‘smallholder’ farmers share identical levels of access to cultivable land; capital inputs; or socially advantageous kin, clan, and political networks. Even amongst historically egalitarian and acephalous (‘stateless’) peoples in the pre-colonial period, there is firm evidence of stratification within these societies.

Similarly, contemporary youth who have parents in the middle class are much more likely to benefit from higher levels of education (specifically university and postgraduate) than those from poor families. Many young civil servants in government and educational sectors are children of parents who were employed in the same fields. The recent enthusiasm for studying African middle classes appears to rest on the assumption that this is somewhat of a new social phenomenon, but (as one would expect) one’s inherited class position is often reproduced. Even for those who grow up poor, their life trajectory is far from determined, although upward class mobility remains more challenging.

A more interesting discussion pertaining to class and youth might focus on how patterns of upward and downward mobility are differentially experienced across class. For example, how frequent is it that youth who come from urban elite backgrounds experience downward class mobility, and where are they concentrated within national and international labor markets? Furthermore, class often closely intersects with ethnicity and geography, so ethno-regional differences within countries should also be considered vis-à-vis youth and class

An interesting case study might look into the social backgrounds and motivations of youth who chose to become trained as ‘crime preventers’ in Uganda during the pre-2016 election buildup. These volunteers attended programs that ostensibly focused on training them to serve in an auxiliary role to security services. Along with boot-camp style military training, they received instruction in hand-to-hand combat and lessons in patriotism. Yet, despite public explanations by government officials for their formation, crime preventers clearly were intended to serve as an informal militia and agent of political repression for President Yoweri Museveni and the ruling National Resistance Movement (NRM). Relevant questions here might look into whether there seemed to be a class-basis for those who attended crime preventer training. Or whether a disproportionate number of crime preventers came from specific areas of the country. A 19 year old I know who served as a crime preventer in Uganda was as likely to criticize the president and the NRM as he was to show pride in his newly earned status. If not to willingly serve as an extension of the NRM, what then motivated him to join the crime preventers? (Cf. Rebecca Tapscott’s DIA post for an insightful analysis of Ugandan crime preventers).

There is also a need for greater historical contextualization when debating youth issues, for generational tensions are much more inherent to social structures in Africa than those in contemporary Western societies. For instance, there is a fundamental tension between younger people and elders in societies historically organized around age-sets. Other organizing principles for clan structures often tend to reinforce gerontacratic dominance, which lock in enduring generational tensions. Elders I speak to in rural eastern Uganda almost universally bemoan the intransigence and shiftlessness of youth. One often comes across a similar sentiment in the speeches of African leaders, although most of these individuals are also males and gerontocrats.

In the case of the elders in eastern Uganda, they are reproducing a generational cleavage that is fundamental to their clan structures. The main difference is that while their generational struggle as youth more likely centered on acquiring adequate dowry from their father and his generation, youth now are just as likely to protest the scarcity of inheritable land and the lack of formal sector urban employment. Therefore, while young people in Africa might often frame their struggles in generational terms—especially since they are well aware of how this framework appeals to Western state actors and NGOs—underlying historical contexts indicate that this is not necessarily something novel.

My argument for why youth in Africa must be recognized as a highly heterogeneous group is far from merely academic. Acknowledging greater levels of differentiation amongst youth—as well as within African societies generally—will strengthen public policy and forms of political engagement on the continent.