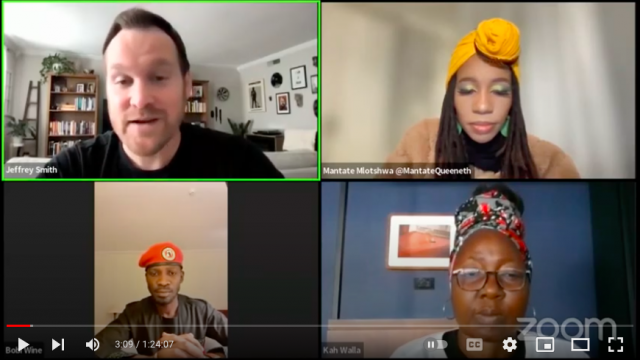 During this era of ‘African solutions for African problems,’ combined with distress about the decline of American democracy, many have been asking: Is it time for the U.S. to mind its own business in Africa? Or should the world’s most powerful democracy – despite its shortcomings – engage in more substantive ways to match its often-lofty rhetoric on democracy and democratic rights with concrete action?

As America considers stepping up its engagement with African heads of state ahead of the U.S.-Africa Leaders Summit, planned for December, this show will bring together relevant political leaders, analysts, and activists to discuss what the next phase of U.S.-Africa relations should look like. Which side of the debate will you be on?

The U.S. has long been among the biggest spenders and most influential foreign powers in Africa. During the late 1980s and early 1990s, for example, it used this influence to push for democratization at a time when multi-party democracy first began to flourish; and the U.S. has consistently been one of the largest providers of foreign aid to the continent, spending hundreds of billions of dollars over the decades on initiatives from education and poverty reduction to investments in civil society and the private sector.

America’s involvement in Africa has also been consistently controversial. From propping up dictatorships from the Cold War onward, to promoting a form of economic adjustment that undermined public services, the U.S. has been accused of pursuing its own interests rather than Africa’s, often placing ‘security’ interests ahead of valid human rights concerns.

Some experts will argue that this blemished and uneven track record does not mean that Africa, writ large, would be better off without American investment; instead, the U.S. should back up its engagement and refocus its strategy to deliver what Africans themselves clearly want – including free and fair elections, accountability for their leaders, to live in peace and security, and for their voices to be genuinely heard and respected.

While perceptions of America are different in each African country, surveys have shown that most citizens wish to live in a democracy that engages with international partners. Many also believe that U.S. involvement will be increasingly important to counterbalance the authoritarian influences from China and Russia. But if America is to play a constructive role in Africa’s future, how can it avoid repeating the grave mistakes of the past?