Democracy is the world’s most accepted system of government. And, core to the practice of democracy is citizens’ involvement and active participation in civic and political matters. Therefore, it can be argued that citizen’s involvement in their governance and decision-making at all levels is a necessary tool to sustain a democracy. But, this is not the case in Nigeria.

Since its return to electoral democracy in 1999, Nigeria’s elections have been characterized by voter apathy. A small percentage of the voting population actually vote, which is an affront to idea of ‘majority rule’ which is one of the basic tenets of democracy. It follows that instead of majority rule, there is ‘minority rule’ in Nigeria because in a population of almost 200 million there were 82.3 million registered voters as collated by the Independent National Electoral Commission (INEC) and only 28.6 million voted in the 2019 elections. A mere 35% of the registered voters voted in the past election!

The voter apathy situation becomes direr when you consider the numbers that voted for the top two presidential candidates – Muhammadu Buhari and Atiku Abubakar. Of the 28.6 million that voted, President Muhammadu Buhari of APC, the declared winner got 15,191,847 votes to beat his closest rival, Atiku Abubakar of PDP who polled 11,262,978 votes. As percentages oft he registered voters, Buhari and Atiku were elected by a paltry 18.5% and 13.7% oft he total registered voters.

The 2019 presidential elections recorded the lowest voters’ turnout since 1999 with just 35.66% of registered voters determining the outcome of the elections. In simple terms, it means those that failed to vote tacitly transferred their voting rights to the few that voted and empowered them to make elective decision on their behalf.

Voters’ Turnouts by States in the 2019 Presidential Elections 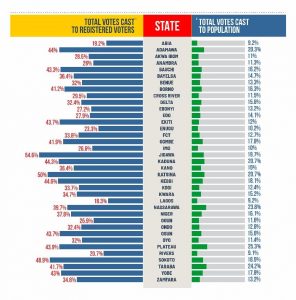 The infographic above shows voter turnout in relation to registered voters and the overall population of each state during the 2019 presidential elections. Of all the states in Nigeria, only Jigawa and Katsina recorded at least 50% voter turnout. Despite Lagos being one of the commercial centers in Nigeria and the second most populous state, it recorded the lowest turnout – 18.3% of the registered voters cast their ballots.

In Rivers State, just 9.1% of the population selected the next president of the country while in Lagos and Abia States only the president was elected by a paltry 9.2% of the states’ population.  Such a degree of voter apathy is endemic to the consolidation of democracy in Nigeria.

The infographic above compares voters’ apathy in Nigeria with selected African countries. Diplomats, political commentators and analysts often regard Nigeria as the ‘Giant of Africa’ because of its large population and economy. However, these levels of apathy suggest that Nigeria is more like a ‘sleeping giant’ or ‘crippled giant’ as some scholars called it because of its failure to harness those potentials to real advantage. This is also reflected in its politics, governance, civic responsibility and other spheres. In comparing voters’ turnouts among selected African states, Nigeria has the least. If Nigeria is really the ‘Giant of Africa’ as proclaimed, the country is supposed to lead by example but the opposite is true.

Voter apathy in Nigeria is attributable to several factors – but the following are possibly the most significant factors hindering Nigerians from participating in their country’s electoral processes.

Also, the politicization of Shari’ah further deepens women’s domestication and limits their political contribution. In this past election, Muslim female politicians were quickly reminded of their religious obligations by men who controlled the religious space and are the de facto religious decision makers. The implementation of Shari’ah served as a tool in the hands of some politicians to discourage women’s participation as candidates for public office and voters in the 2019 elections.

Citizens’ participation in electoral process is a necessary for democratic sustenance. ´But, the conduct of electoral processes and governance in Nigeria do not inspire confidence. Most are discouraged and kept away by several antidemocratic norms and culture which include electoral fraud, political violence, violation of human rights, corruption, etc.

Regardless, there were small improvements in the conduct of the last elections in Nigeria when compared to previous elections that have held. Previous elections were marred with electoral malpractices including use of fake voter’s card and impersonation of voters. Use of Card Reader machines in the 2019 elections reduced such electoral fraud. This could be consolidated if INEC adopt electronic voting. However, on their own, such improvements still fail to restore confidence and inspire citizens to participate in electoral processes.

Seun Akinyemi is a Program Officer at EiE Nigeria