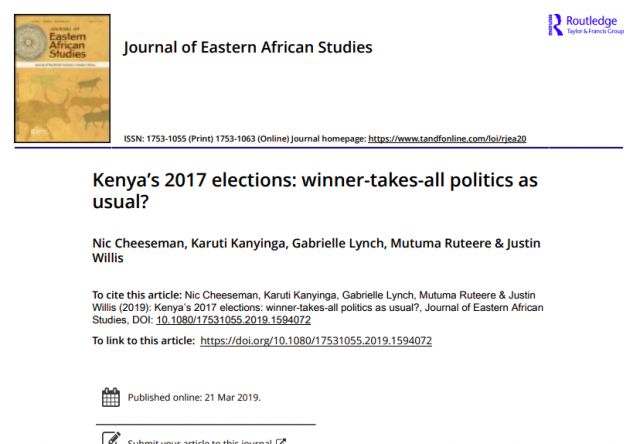 What does the Kenyan election of 2017 have to tell us about the capacity of the country’s constitution to reduce winner-takes-all dynamics and promote political stability? Nic Cheeseman, Karuti Kanyinga, Gabrielle Lynch, Mutuma Ruteere & Justin Willis investigate.

A new special issue of the Journal of Eastern African Studies draws together a range of papers by researchers who spent much of 2017 covering the Kenyan general election and its aftermath. In addition to papers on devolution, the judiciary, land and gender, the issue features an introduction that asks whether the election represented ‘politics as usual’ or saw the emergence of a new form of politics as a result of the reforms introduced in country’s new constitution in 2010.

The paper notes that “The Kenyan general elections of 2017 were the second to take place under a new constitution introduced in 2010 that, among other things, sought to devolve power away from the president by creating 47 new county governments. They were also the first to take place in a context in which politicians and voters had practical experience of the powers of the new devolved elected posts and operations of the new political dispensation. As a result, the 2017 elections represent the first real opportunity to take stock of whether the 2010 constitution has effectively reduced the stakes of political competition and thus the prospects for political instability.”

In order to answer this question, the article begins by reviewing the controversy surrounding the presidential election, which was effectively a two horse race between Uhuru Kenyatta and Raila Odinga. The refusal of either leader to consider defeat strongly suggests that, despite transferring some powers away from the president, it still remains the ultimate prize in Kenyan politics.

What of the other ways in which the constitution seeks to boost popular support and reduce political pressure? Three of the most prominent reforms introduced in 2017 were a 50% + 1 threshold for the winning presidential candidate, ensuring that the elected candidates receives a majority of votes cast; the introduction of devolution and 47 new counties, each with a directly elected Senator and Governor, and the creation of a new Supreme Court with the powers to hear electoral petitions. All of these developments have changed the nature of electoral politics, the article finds, but not in a straightforward way:

“The 50% + 1 threshold has provided further incentive for coalition formation, but this pattern was clearly evident in Kenya well before the 2010 reforms and has been driven as much by what Cheeseman and Tendi have referred to as a ‘politics of collusion’ between the country’s political elite as any specific feature of the electoral process. In turn, devolution provided a wider set of Kenyans a stake in the system because opposition leaders won many governor and senator races. Leaders who then had strong motivations to guard against violence in their own areas. However, in 2017 the victory of the ruling party in many lower level elections, including the capital Nairobi, meant that the rebalancing effect of county elections was less pronounced than it had been in 2013. Moreover, the aftermath of the polls demonstrated that devolution has also generated new political structures that can be used to channel dissent against the state, most notably when some opposition governors raised the prospect of their counties seceding from Kenya. Finally, the Supreme Court demonstrated its capacity to act as an independent institution to defend the quality of democracy when it became only the third court ever to annul the election of a sitting president. However, this ultimately did little to sustain the legitimacy of the election because the court immediately faced criticism from the government and was unable to ensure the implementation of much needed reforms ahead of the ‘fresh’ poll.”

Against this complex backdrop, the paper concludes that the most significant factor limiting the country’s “winner-takes-all” dynamic is the willingness of political leaders to do deals behind the scenes – no matter how aggressive the public rhetoric becomes. “Indeed, while it is clear that the 2010 constitution has reshaped the political landscape in profound ways, it was not changes to the formal – i.e. written and codified – rules that ended the political impasse, but a personal deal struck between President Kenyatta and Odinga. In other words, the resolution of the 2017 electoral crisis was rooted not so much in the niceties of constitutional reform, but in a long history of elite-level pacts, a classic informal – i.e. unwritten and uncodified – institution. As a result, Kenyan politics is less ‘winner-takes-all’ than it may at first seem, but this is not simply a result of the introduction of a new political dispensation. Instead, the 2017 elections in Kenya serve as an important reminder of how formal institutions alone cannot change political dynamics.”

If you cannot get access, you can request an article by sending your email address to @fromagehomme

WEBINAR! Election Observation from the Bottom Up