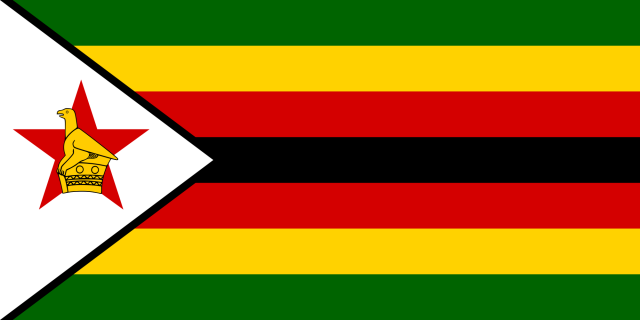 Sara Rich Dorman takes a look at the #thisflag movement in Zimbabwe and asks why the country’s flag has been relatively absent from protest politics to date. Sara is a Lecturer in Politics at the University of Edinburgh. She tweets at @afr_pol.

Pastor Evan Mawarire’s #thisflag movement has captured Zimbabwe’s social media as well as its airwaves. Voicing his dismay with the state of Zimbabwe he has reclaimed the language of nationalism for ordinary Zimbabweans. A few years ago, when vendors on the streets were selling Zimbabwean flags for car windows, I shocked a friend by asking to stop and buy one –only ZANU(PF) stalwarts openly brandished this supposedly national symbol.

It’s not that attempts haven’t been made before to reclaim these ‘national’ images.   My favourite is the flag of Zimbabwe turned into a cross, carried by pastors in a national demonstration in 2005.

Also in 2005, two little booklets of writing under the pseudonym ‘Magari Mndebvu’ circulated, one entitled ‘Beautiful Zimbabwe’ with a cover picture of the stone ‘Zimbabwe Bird’ national emblem and the other showing the flag and the balancing rocks with the title ‘Pamberi ne Zimbaber’ (Forward with Zimbabwe).

But these are exceptions. Most civic groups chose relatively ‘neutral’ symbols, such as the outline of the country or the balancing rocks in logos and posters. Challenging the capture of Zimbabwe’s national symbols by ZANU(PF) was not a popular choice. In analysing this failure on the part of academic and civic actors to articulate a convincing alternative account of Zimbabwean citizenship, Miles Tendi speaks of Zimbabwe’s intellectual space having been ‘ceded’ to the nationalist public intellectuals.

Why did this happen? In 2004, the eminent historian Terence Ranger coined the term ‘patriotic history’ to encompass the way in which the ZANU regime had marshalled the education system, the media, and other institutions to promote a narrowly ‘patriotic’ account of Zimbabwean history. But for Zimbabwe’s first two decades of politics, overt ‘nationalism’ was not much in evidence. The most common public discourses were of ‘development’ and ‘unity’. I’m not suggesting that people weren’t nationalists, nor that they weren’t patriots, but justifications for policies consistently hinged on ‘development’. In newspaper headlines, public speeches, and publications every group from teachers to churches to farmers was told to be ‘united’ in order to bring development.

Formally nationalist iconography was muted. Of course, provinces, cities and streets were renamed, Heroes Acres built, new holidays replaced Rhodesian ones, and statues were removed but proposals to bring in national service or national dress were never carried through.   The stamps issued on 18 April 1980 to commemorate Zimbabwe’s independence depicted minerals, animals and waterfalls. As far as I can see, the first stamps to commemorate Zimbabwe’s nationalists were issued in 1984, on the first Heroes’ Days.   Although education was a huge priority for the new government, curriculum reform – intended to include national unity, patriotism, civics and local history – was delayed and neglected. Only last year was it mooted that KGVI barracks might be renamed after Josiah Tongogara, commander of the ZANLA guerrilla army. What is striking about this is less the decision to honour Tongogara – a key rival of President Mugabe – and more that a high profile army barrack had continued to be named for a British Monarch more than 30 years after Zimbabwe became a republic and 12 years after it had withdrawn from the Commonwealth.

How do we explain this paradox? In my book, which is published later this year, I argue that not only was nationalism was sublimated to development, but also that society was demobilized. This was in part because of the demands of the Lancaster House agreement – the new government needed to balance competing demands from old allies and old enemies alike. But it was also because retaining a mobilized society risked opening up debates about nationalism – about the kind of country that people had fought for, about the sacrifices and injustices that had occurred during the war, and the divides that existed within as well as between nationalist movements.

This helps explain why peasants who scrambled on to land were frequently removed; why war veterans weren’t allowed to form their own representative organization, and why churches, unions, and civic groups were sternly marshalled into place. But this depoliticization also made it very difficult for alternatives to be articulated. The NCA broke some barriers by ‘talking about politics without being political’. But the real shift came after the government lost the Constitutional referendum in February 2000, and we saw the remobilization of the war veterans, the introduction of the ‘green bombers’, and militias like Chipangano.

Ironically, it’s that remobilization of pro-ZANU groups that has created the space for the remobilization and reclaiming of national symbols by Pastor Evan. Capturing the dismay and disaffection with political parties, #thisflag brings together the apolitical, the party stalwarts and the activists who backed both Itai Dzamara’s attempt to reclaim Africa Unity Square and Women of Zimbabwe Arise (WOZA)’s public protests. While there have been protests, marches, and days of prayer in the past, through social media #thisflag seems to have reached a wider and broader audience.

Zimbabwe’s re-mobilized political sphere is fragile and potentially unstable. It remains to be seen how, if at all, #thisflag will move beyond the internet. But, the sheer jubilation with which Zimbabweans have greeted the re-opening of this debate and reclaimed the mantle of their nation is astonishing.