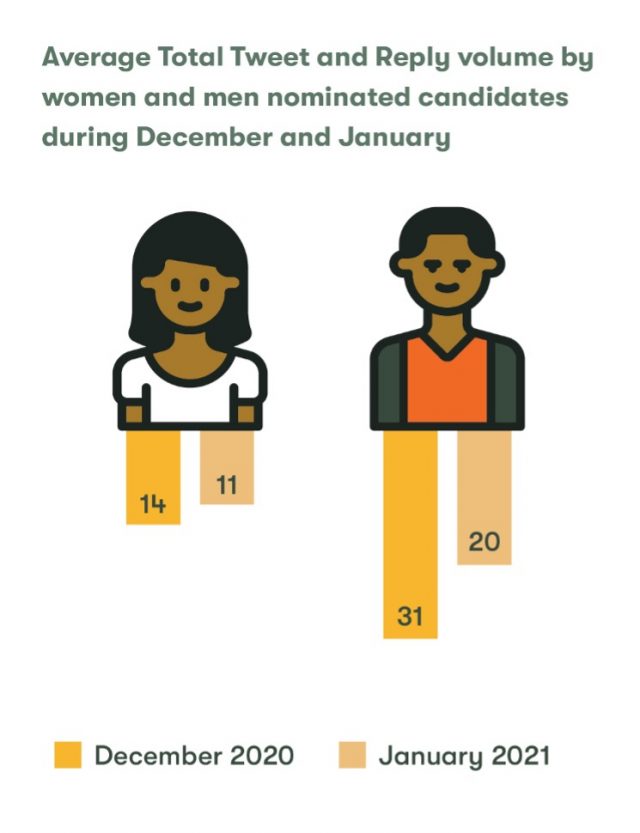 During the 2021 General Elections in Uganda, we monitored social media accounts belonging to nominated women candidates and highly vocal women to understand their usage of social media for campaigning as well as the manifestations of online violence against these individuals.

The growth of internet users has brought about social and economic benefits on a global scale. However, significant harms such as online violence, disinformation, and hate speech have also proliferated in these online spaces. Discriminatory gendered practices are shaped by social, economic, cultural, and political structures and are similarly reproduced online across digital platforms. In Uganda, there has been rising rates of online harassment targeting both high profile women as well as everyday users.

It was on this basis that Pollicy, with support from the National Democratic Institute, sought to identify and analyze the scale of online violence targeted at political candidates and high-profile individuals during the January 2021 general election in Uganda. The study also sought to determine how this online harassment might impact usage, expression, and participation in the elections by those individuals. Researchers identified and monitored the accounts of 152 nominated candidates and 50 high-profile individuals during the campaign and election period on the most widely used public platforms, Facebook and Twitter.

These accounts were monitored between December 2020 and January 2021, coinciding with public campaigns and multiple elections across several leadership categories and the entire country. In addition, the researchers also interacted with several experts from women’s digital rights organizations to further understand the impact of online violence against women politicians and leaders.

The methodologies used during this study include lexicon building focus group discussions, data scraping of publicly available profiles, qualitative data analysis, and qualitative data analysis on the collected data. Building off of NDI’s Tweets That Chill: Analyzing Online Violence Against Women in Politics, Pollicy’s typology focused on “insults and hate speech,” “embarrassment and reputational risk,” “physical threats” and “sexualized distortion.” This study also relied on a Machine Learning model built specifically for this project to help with the hate speech classification of text in both English and Luganda, so as to speed up the research process.

Research questions assessed the impact of online violence against women in politics (OVAW-P) in Uganda to determine how it impacts their use of digital solutions and social media for expression and participation in the elections. Pollicy focused on women politicians’ use of social media for campaigns, evidence of OVAW-P, and association of OVAW-P and factors such as gender, age, political party, etc.

While digital spaces have been revolutionary in increasing women’s participation in politics, findings from Pollicy’s recently released Amplified Abuse report showed that Ugandan women have yet to fully take advantage of the benefits of being online. Women candidates heavily relied on Facebook for political campaigning with 68 percent of women’s social media accounts being used at least once a week during the monitoring period as opposed to Twitter where they generated less than half of the tweets generated by men.

General usage of hashtag activism was low but even much lower when looking at women candidates. 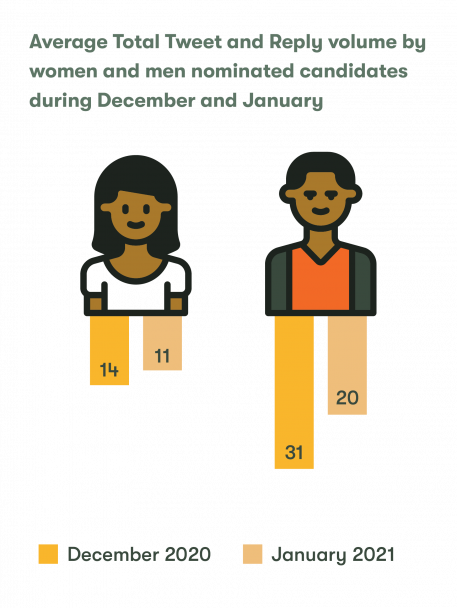 Furthermore, there were also noticeable forms of online violence experienced by women politicians, and these included body shaming, gendered disinformation, sexual harassment, trolling, and gendered and sexualised insults among others. This study also found that the violence targeted at women was rooted in misogynistic beliefs and was based on their ability to uphold gender norms while attacks towards men were based on their ability to perform their leadership roles.

Other key findings include:

This study identified a number of recommendations from women actors and CSO representatives, for political organizations, the Uganda Electoral Commission (EC), parliamentary bodies such as Uganda Parliamentary Women’s Association (UWOPA), women’s groups, media, and civil society to implement. For civil society, the study recommended that courses and refresher training be provided on digital safety and hygiene for all aspiring and incumbent women politicians in addition to increased research on online behavior and de-stigmatization of speaking out on violence. For technology companies and other private sector players, the study recommended that local languages be used in content moderation in addition to improvements in reporting mechanisms on online violence.

While Pollicy’s 2020 study on online violence indicated that one in three women in Uganda were victims of online violence, this Amplified Abuse study revealed that violence was amplified among women leaders and high-profile individuals with at least one in two vocal women experiencing online violence. This furthermore emphasized the growing need to address online violence because its amplification towards vocal women affects their participation in politics and impacts democracy.

“It shouldn’t be on women alone to protect themselves online. This is a big issue, there should be collaborative efforts to empower women with digital safety tools,” said Neema Iyer, Executive Director of Pollicy.

To address some of the findings highlighted in the report, Pollicy is currently supporting a number of women in politics to equip themselves with digital skills by co-creating an open-source curriculum which addresses some of the issues highlighted in the findings. The programme dubbed VOTE: Women is a leadership springboard for women leaders that leverages digital tools for women to follow their ambitions of civic leadership. Under VOTE: Women we have been presented an opportunity to collaborate and co-create emerging and catalytic content that will ensure maximising the potential of digital skills for African women leaders.

The learning platform will focus on interactive content, peer learning and networking, mentorship and fundraising opportunities to build digital skills to power successful political campaigns and careers for African women by African women. To learn more about Pollicy’s Amplified Abuse report, watch the recording of the launch of the final report and explore the interactive dashboard of insights from the study or download the full Amplified Abuse report.

Pollicy (@pollicyorg) believes in the power of data to revolutionize how governments deliver services to their citizens. We aim to digitally transform government services across Africa through an information-centric approach and craft better life experiences by harnessing improved data collection and utilization. https://pollicy.org/.

The National Democratic Institute-NDI is a non-profit, non-partisan, non-governmental organization that works in partnership around the world to strengthen and safeguard democratic institutions, processes, norms and values to secure a better quality of life for all. NDI envisions a world where democracy and freedom prevail, with dignity for all.