The Moral Economy of Elections in Africa, the new book by DiA’s very own Nic Cheeseman and his colleagues Gabrielle Lynch and Justin Willis, is out now!

The book represents the culmination of five years of research in Ghana, Kenya and Uganda including over 300 interviews, 3 nationally representative surveys, thousands of pages of archival research and much more. The book is motivated by a profoundly important question: Do elections turn people into democratic citizens? Elections have long been seen as a way to foster democracy, development and security in Africa, with many hoping that the secret ballot would transform states.

Moral Economy of Elections in Africa on Biteable.

Adopting a new approach that focusses on the moral economy of elections, Cheeseman, Lynch and Willis show how elections are shaped by competing visions of what it means to be a good leader, bureaucrat or citizen. Using a mixed-methods study of elections in Ghana, Kenya and Uganda, they explore moral claims made by officials, politicians, civil society, international observers and voters themselves. This radical new lens reveals that elections are the site of intense moral contestation, which helps to explain why there is such vigourous participation in processes that often seem flawed. Demonstrating the impact of these debates on six decades of electoral practice, they explain why the behaviour of those involved so frequently transgresses national law and international norms, as well as the ways in which such transgressions are evaluated and critiqued – so that despite the purported significance of ‘vote-buying’, the candidates that spend the most do not always win.

The Moral Economy of Elections is available for purchase as a paperback, hardback and kindle, and was recently featured in the Economist magazine article on the role of politicians in Africa. 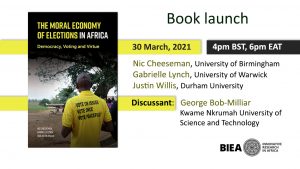 Praise for the Moral Economy of Elections

‘Why do people invest time, money and energy in elections that are not free and fair? This provocative book draws on careful research in Kenya, Uganda and Ghana to persuasively argue that a politics of virtue is at play, in which both voters and politicians use elections to stake out moral claims. The book, which challenges conventional understandings of elections, such as those that focus on patrimonial and ethnic politics, is certain to gain recognition as one of the most important theoretical works on African politics.’ Aili Mari Tripp, University of Wisconsin, Madison

‘A fresh and nuanced exploration of elections in Africa through the lens of moral virtue. How do political actors – citizens, politicians, officials – endeavor to ‘do the right thing’ (as they see it) about voting, seeking office and managing the polls? Using multiple research methods, the authors uncover a range of complex popular conceptions of good leadership and proper elections. They find that, in resolving tensions between civic virtue and patrimonial obligation, many Africans are constructing forms of political accountability that are culturally authentic.’ Michael Bratton, Michigan State University

‘Cheeseman, Lynch and Willis critically examine the behavior of key actors in Africa’s electoral processes. Drawing on the tension between civil and patrimonial registers, this book offers new and provocative insights into the dynamics of African elections. Highly relevant for students and scholars of African politics and beyond.’ Sebastian Elischer, University of Florida

‘A timely and important book on ideas of virtue and the moral economy of elections in Africa. It is comprehensive in its comparison of Ghana, Kenya, and Uganda and is an essential read for scholars of politics.’ Peace A. Medie, University of Bristol