The fall of communism marking the end of the Cold War was supposed to have made the world forever safe for the liberal democratic system and market-oriented economies. But a mere three decades later a new “system competition” is emerging between liberal democracies and assertive authoritarian regimes. The new players are the USA and the People’s Republic of China (PRC), and to a lesser extent the European Union and Russia.

Examining the new system models can help us shed light on their respective strengths and weaknesses and their possible future role in international politics. Understanding the new dynamics is  relevant to all parts of the world, including Sub-Saharan Africa, where the PRC plays an increasingly active role  through its “Road and Belt Initiative”.

The “Four Chinas” described here include the PRC, Singapore, Hong-Kong, and Taiwan. The four cases share some cultural and historical roots. At the same time, they represent all the major and vastly differing political system types in today’s world. The PRC is a closed autocracy; Singapore is an electoral autocracy; the special case of Hong-Kong is an electoral democracy, while Taiwan  is a liberal democracy.

The “four Chinas”, examined through the prism of how they have dealt with the COVID-19 pandemic, constitute a natural experiment. It offers a litmus test for specific features of the respective regimes in the context of the ongoing global democracy vs. autocracy system competition, recently further exacerbated by Russia’s war in Ukraine.

The actual “liberal democracy” scores of the ‘Four Chinas’ is illustrated below by the most recent “Varieties of Democracy” (V-Dem) dataset in the Figure below.

Liberal democracy in the “4 Chinas” 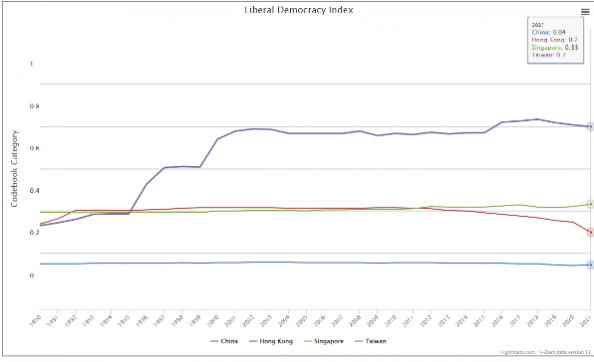 Quite clearly, the PRC has never been a liberal democracy. Hong Kong has considerably declined, especially in the wake of the  March 2021 new electoral law passed by the National People’s Congress of the PRC that all candidates for the Chief Executive, the Legislative Council and the Election Committee will be pre-selected to ensure that “only patriots should govern Hong Kong”. This move  has turned Hong Kong from an “electoral democracy” to a very special “electoral autocracy”. Singapore has consistently maintained its hybrid “electoral autocracy” status. Taiwan has firmly consolidated its liberal democracy and is comparable to longer established democracies elsewhere.

In December 2019 an unknown infectious lung disease was detected in the City of Wuhan in the Hubei Province in China. It was quickly transmitted by travellers to neighbouring countries and Europe in the first months of 2020. In February 2020, the World Health Organisation (WHO) coined the term COVID-19 for this infection caused by the new Corona virus SARS-CoV-2. By March 2020 WHO declared it a pandemic as the virus spread worldwide infecting an unprecedented more than 500 million persons and causing more than 6 million deaths in all parts of the world. Statistics for the “ Four Chinas” are shown in the Figure below. 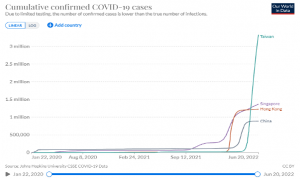 As can be seen, the pandemic was contained relatively successfully (compared to Europe or the U.S.) in the four countries until late 2021 in Singapore and early 2022 in the other three cases.  Hong Kong and, especially Taiwan, showed the most dramatic increases more recently.

The overall statistics are  presented in the following Table.

COVID-19 confirmed cases and deaths in the “4 Chinas”

The above figures have to be taken with a grain of salt since the testing and reporting of cases and precise diagnoses of causes of deaths have varied greatly from country to country and  reflect the respective regime openness and transparency. Therefore more details are required, as well as taking into account measures taken in each case.

In the PRC a top-down “Zero-COVID” strategy was followed from the outset. The City of Wuhan and other major cities in Hubei Province were subjected to a complete lockdown, which lasted almost three months. All schools, non-essential companies, public transport, airports, and major highways were closed. Only one person from each household was permitted to go outside for provisions once every two days. Other provinces and major cities soon followed. A strict health monitoring system tracking each infection was imposed. (The comparative impact of such measures is  monitored and documented in a COVID-19 dataset combining the “CoronaNet COVID-19 Government Response Event Dataset” and the “Oxford COVID-19 Government Response Tracker“, compiled among other organisations by Oxford University and the Technical University of Munich).

The PRC imposed the strictest measures, followed by Singapore. Hong Kong and Taiwan remained more lenient. Other measures such as the wearing of masks and social distancing on the whole were more generally accepted reflecting some longer established cultural traditions in East Asia in these regards.

In early 2022, Hong Kong, which was not as sealed off from the outside world as mainland China, was severely hit by the the more recent Omicron variant of ther corona virus. The number of confirmed cases and related deaths increased dramatically. Hospitals and other health resources quickly reached capacity. Given the many existing links between Hong Kong and the mainland, the spread of this wave could not be prevented. At the end of March 2022, the City of Shanghai including the major harbour were subjected to a complete lockdown for almost two months. In May 2022 the capital of Beijing was affected as well. The number of cases and deaths spread almost countrywide. The Chinese lockdowns have severely hampered domestic and international supply chains and industrial production. Unemployment has risen and many temporary workers have been left without any compensating welfare measures. For the first time in many years, open street protests could be observed. The situation has been further aggravated by the fact that in spite of high vaccination rates the locally produced vaccines such as Sinovac proved to be less effective than their Western counterparts.  It seems that the COVID genie has escaped from the bottle and could no longer be contained by the Zero-COVID policy.

Comparatively speaking, Singapore has taken a middle road in coping with the pandemic. Confirmed cases and COVID-related deaths per million people were higher than in China and, until recently, in Taiwan, but lower than in Hong Kong. The imposed restrictions were also less severe. The situation was helped by the fact that Singapore has a well-developed health system and, as a tropical country, has a longer experience with serious viral infections such as the SARS-CoV-1 pandemic in 2002/2003. The government has issued a new list of measures to be observed to lessen transmissions of Omicron, but they are less restrictive than in China.

For most of the period Taiwan also followed a Zero-COVID policy. However, in contrast to the PRC this was not done in a repressive top-down manner. Instead, local governments, private enterprises and citizens were all engaged with the National Epidemic Prevention Team. In addition, various innovative digital tools have been introduced to distribute real-time health information, track individuals subjected to home quarantine and facilitate international border controls for inbound passengers before arrival. Social acceptance thus remained high and trust and cooperation with the government continued. As in Singapore, the island location of Taiwan  was also a facilitating factor.

In March 2022, in spite of the Omicron variant still much in evidence, the Taiwan government announced a new strategy as a possible conscious “exit” from the pandemic. This explains the sudden rise of confirmed cases in Figure 1 presented above. Travel restrictions and contact tracing were relaxed, mild cases are isolated at home, and close contacts need only be quarantined for three days instead of ten. In this way, a return to a more normal life should be achieved.

It is too early to judge the effectiveness of  this strategy, but it shows the prudent approach the government has taken all along, in stark contrast to the dramatic repression in mainland China.

What do we learn from comparing the four chinas?

This “natural experiment” has important implications for the ongoing global political system competition. It shows that a democratic regime, such as the one in Taiwan, was able to cope well with the COVID pandemic without resorting to the brutal measures imposed in the PRC, where, at the time of writing, the situation is still out of control and is further compounded by human suffering and highly disruptive effects on the economy.

Hong Kong, in its very special position, seems to have faced the worst situation, with civil liberties lost and the authorities unable to cope with the latest COVID wave in an effective way. Singapore, by and large, has maintained its intermediate position in all regards.

There are, of course, limits to the extent that this “experiment” can be generalized as specific conditions vary from country to country and region to region. Nevertheless, the lesson from Taiwan provides important evidence for the resilience of democracies under adverse conditions where the benefits of decentralized local authorities, consensual measures, and a strong and cooperative civil society all come to the fore. This lesson seems to be worth heeding in Africa and other parts of the world as well.

Dirk Berg-Schlosser is professor of political science, Marburg University in Germany, and  Research Associate of the Centre for Research on Democracy CREDO at Stellenbosch University in South Africa.

This blog is based on the preparation of a larger paper with Ursula Hoffmann-Lange on “The Four Chinas – Which Model for the Future?”

LONG READ: Problematizing the Democratic Imperative – The challenge of transition and consolidation in weak states