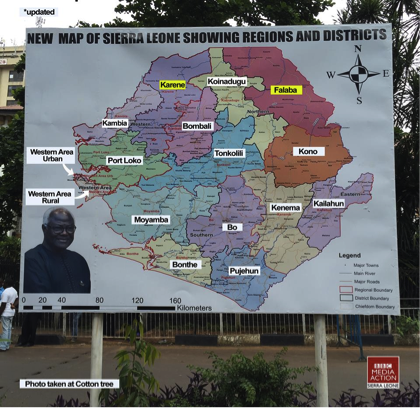 With the second round presidential election run-off due to take place in the coming days, Laura Martin analyses the prospects of success for Sierra Leone’s political parties based on her conversations with voters on the ground.

On 7 March 2018, Sierra Leoneans went to the polls to decide on their next president. Historically, two parties have governed Sierra Leone: the Sierra Leone People’s Party (SLPP) and the All People’s Congress (APC). This election has, however, been accompanied by the emergence of two new and not insignificant parties: the National Grand Coalition (NGC) and Coalition for Change (C4C). These parties, along with the contested 10-year legacy of Ernest Bai Koroma’s APC government, have meant that Sierra Leonean allegiances have been less predictable this time around.

In the days following the election, the National Electoral Commission (NEC) released the results in 25% intervals. To win in the first round, a party needed 55% of the overall vote. By 12 March, the final results were in: Julius Maada Bio (SLPP) had come first with 43.3%, while Samura Kamara (APC) received 42.7% (a 15,000-vote margin). In third and fourth place were Kandeh Yumkella (NGC), receiving 6.9% and Samuel Sam-Sumana (C4C), who received 3.5%. The other 3.6% went to a combination of small parties. Sierra Leone’s constitution states that the runoff must occur within two weeks of the final result and so, on 27 March, #sierraleonedecides between the current ‘sunny’ APC, (reflected in its rising sun iconography), or whether they will, after 10 years and two elections, ‘return to the shade’ of the SLPP’s palm tree, an emblem of Sierra Leonean life (also included in the party’s coat of arms).

In my conversations with Freetownians, a constituency well known for their mixed political affiliations, prior to the election, APC seemed the majority preference. Historically, the APC associates itself with the grassroots, vying for the interests of the ordinary man and combatting the elitist attitude traditionally associated with the SLPP.   People in the streets, including vendors, waiters and motorbike drivers, pointed to the infrastructure the party has delivered, making their everyday lives easier, such as lights, water and roads. They wanted continuity, or as the APC campaign slogan goes ‘Tolongbo’ (straight ahead).

However, other Sierra Leoneans I’ve spoken with, from educated elites to women in the market, have seen past this. As one Freetown tailor put it, ‘this is the job of the government, why should we be grateful?’ APC opponents point to the difficult economic climate penetrating everyday life, such as rising food prices, rent and school fees. Despite their historic associations with the grassroots, the APC’s reputation has also evolved into one that is more elitist. In political discussions and interviews, the government has been referred to as ‘Koroma and his sychophants’, who have opportunistically ‘eaten the money’ where they can, from mining contracts to funds tackling the Ebola outbreak and to help mudslide victims. They are perceived to have also further entrenched politics along regional lines by favouring their northerner supporters for government positions and contracts (the SLPP is traditionally associated with the South). In sum, the APC campaign underestimated its citizens, believing physical infrastructure, regional loyalties and various forms of payment would be enough to get votes. But, as one taxi driver stated, ‘we just eat the money and vote for who we want. The ballot is secret, how will they know?’

Interestingly, APC candidate Samura Kamara does not necessarily fit Koroma’s mould, although Koroma seemingly handpicked him for the nomination. He has a reputation as a no non-sense technocrat, far more hardworking than Koroma’s cronies. He holds a PhD in Development Economics from a UK university and has been working for the past 20 years for both parties, across different ministries and international organisations, including the IMF. Given this, the question for some Sierra Leoneans has been, does he want change or continuity?

Conversely, retired Brigadier Julius Maada Bio has a long history in Sierra Leonean politics. Supporters point to his plans for free education and look back to previous SLPP Tejan Kabbah’s second post-war term (2002-2007) with better economic circumstances. Opposition, however, remember Bio’s controversial role in the National Provisional Ruling Council (1992-1996) during the civil conflict when a number of extrajudicial killings occurred. He has more recently been accused of serious corruption allegations for the brief period in 1996 when he was head of state. Their motto ‘Paopa’ (at all costs) conveys a forceful tone that makes some people uneasy.

While these political factors (along with regional ties) play an important role in voter preferences, the really interesting component is the emergence of two credible third party candidates. Both the NGC and C4C were created as a result of grievances with the SLPP and APC, respectively. After losing the SLPP presidential nomination, Kandeh Yumkella created his own NGC party just six months shy of election day. C4C’s Samuel Sam-Sumana is the aggrieved former vice president who was fired by current APC president Koroma. Both individuals have loyal followers in their respective districts, both considered swing states (Yumkella in the Northern district of Kambia and Sam-Sumana in the Eastern district of Kono). This demonstrates that while ethnic and regional ties have not entirely disappeared in favour of political issues, loyalties have shifted and been further divided, and not necessarily in favour of the APC.

It was rumoured that both Sam-Sumana and Yumkella have held meetings at Bio’s Freetown headquarters this week. On Wednesday 21 March, Yumkella publicly stated he would not be endorsing either party, urging Sierra Leoneans to make their own decision. His stronghold district, Kambia, has in recent years voted APC, but is generally divided. This leaves his 6.9% uncertain. On the other hand, sources from Kono have already pledged their allegiance to the SLPP, citing the APC’s mistreatment of Sam-Sumana. This support alone brings the SLPP close to 47%. If they also received the majority of support from other small parties, this may push them past the 50% line. Even if the SLPP received half of Yumkella’s 6.9%, along with Sam-Sumana’s votes, this may be enough for a win.

As a general reflection of voting trends, parliamentary results have seen the APC losing seats in all districts to all three parties. It is now likely the APC will not have a two-thirds majority required to pass some legislation. This again may indicate a general disillusionment with the APC. Sierra Leone has never had an instance of the president and parliament being led by different parties. If Maada Bio is voted in, he will face huge difficulty in passing legislation to implement his parties desired reforms, particularly in relation to education and anti-corruption.

Ultimately, 57% of Sierra Leoneans did not vote for the APC, for one reason or another. The question now is, will these third party voters align with the SLPP, will some go APC or will they not turn up? Along with just a 15,000-vote difference and the ‘third parties’ factor, there have been rigging allegations from all parties. NEC did nullify 221 polling stations (2%) across all districts due to irregularities, suggesting that the commission is at least trying to systematically combat fraud. In addition, 139,000 (5%) votes were voided. These percentages are also not insignificant. It is likely that in a runoff, where only one candidate is chosen, fewer votes will be voided. This could also be a deciding factor.

Right now the race is too close to call. But as one woman stated: ‘It’s too hot under the sun. We need change.’ Indeed, both the numbers and attitudes suggest that change may well be coming, but it will be up to voters on 27 March to decide.