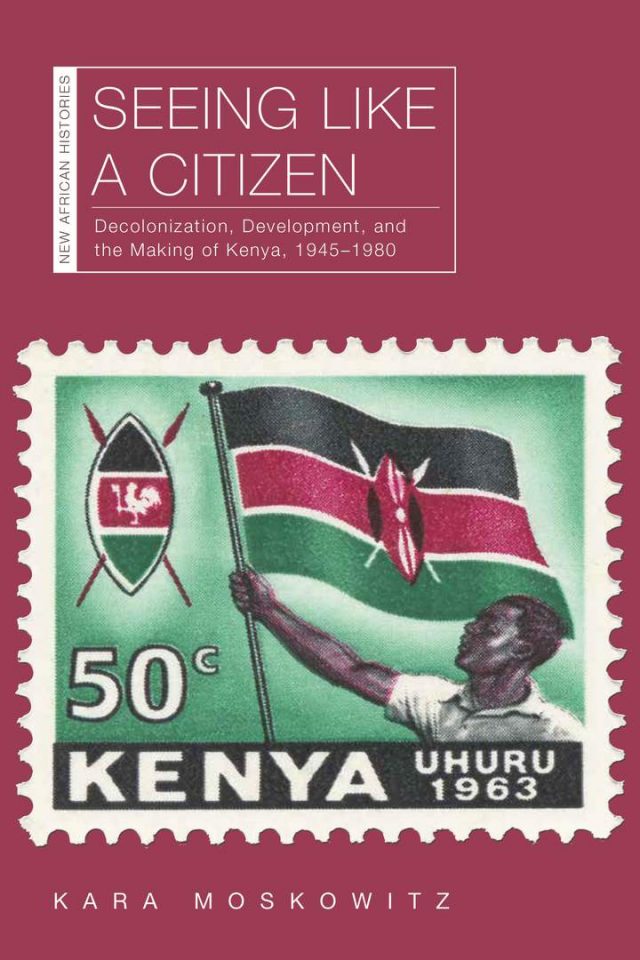 In a 1964 letter addressed to Kenya’s first President Jomo Kenyatta, two Kenyans complained that the poor had not received enough of the land distributed through resettlement programs, writing: “Now, if these acres are finished, what will you give us we the needy? We are surprised to be told that we received independence . . . The poor voted to get a government which can eliminate bad things of the colonialists for them, yet things are getting worse than before.” The writing effused disillusionment. Independence from British colonial rule had come just mere months prior. Anticipation had been great, however, and many Kenyans expected and made claims to land, development, and services.

This vignette encapsulates the main threads of the argument of my book, Seeing Like a Citizen: Decolonization, Development, and the Making of Kenya, 1945-1980. First, decolonization and development were coterminous and co-constitutive. Second, in Kenya as elsewhere, development programs and practitioners targeted the countryside and its rural citizens, who constituted the vast majority of the populace.

Third, the 1960s moment offered extraordinary openings for political and economic innovation. Transnational development regimes attempted to expand into the decolonizing world, transitional states set out to craft a new political order, and, significantly, ordinary Africans actively intervened in deliberations over development. Though most Kenyans could not directly influence the development planning negotiated behind closed doors in Nairobi, London, Geneva, or Washington, they could affect the form and success of development programming on the ground in their communities, and they could shift the national dialogue.

Fourth, and most importantly: centering on the diverse set of actors negotiating development exposes constraints on state power and reveals how average people fashioned citizenship in the postcolonial world. Much of the literature has emphasized top-down, high modernist interventions led by the state. Yet, grassroots actors shaped and influenced development programs, thus limiting state control. In the process of pursuing development, rural Kenyans helped determine the policy priorities of the new nation, and they worked out how citizens accessed resources. In turn, they played an important part in defining the state-citizen relationship. Focusing on deliberations over the meaning and method of development deepens our knowledge of how global political practices came to be composed and recomposed on the ground in local settings, offering important insights into the texture of political life in the early postcolonial world.

Africans throughout the continent expected that independence would bring development. These expectations grew out of the postwar emphasis on development and welfare, which expanded state-led programs. The promises of African nationalists further contributed to widespread expectations for development and coincided with the establishment of the Bretton Woods institutions. The United Nations proclaimed the 1960s the “Development Decade,” the same decade that witnessed the rapid decolonization of much of Africa.

In Kenya, independence negotiations began in 1960, with debate centering on the constitution, and on development. As Kenya gained formal sovereignty, an expanding set of external actors played a growing role in its affairs, creating and enacting development programs. These programs formed part of a broader emergence of postwar development policies increasingly shaped by transnational institutions and nongovernmental organizations (NGOs).

The scholarly literature to date has highlighted—but overstated—the high modernist logic of mid-twentieth century states, offering few insights into how development was carried out on the ground or how it shaped the material well being of the poor. Ordinary Kenyans were able to actively participate in development processes, at least in part, because the state had more limited reach than previous scholarship has suggested. Kenya’s postcolonial state was neither a monolithic nor a monopolistic institution. Rather, it was composed of dissenting actors, who deliberated the merits of different economic models, and disagreed on how to order the nation’s priorities. In Kenya, as elsewhere, neither development practice nor theory was ever coherent, fully constituted, or unanimously supported. Officials disagreed not only on how to achieve economic growth, but on whether growth was even the ultimate goal.

Neither development funding nor implementation was ever channeled exclusively through state institutions. Many scholars have accepted that, in the 1960s, state actors became the primary agents of development. What often follows from this presumption is that “gatekeeper states” maintained centralized control over the flow of aid and resources and, in turn, expanded and entrenched bureaucratic power. Yet, the postcolonial state was limited by fiscal and personnel constraints. Though the state might have been an agent of development, it was certainly not the only agent. All developmentalist regimes did not inevitably produce a capacious bureaucracy that increased state power. In fact, state, non-state, and civil society actors, together, established new modes of governance and development.

These histories tell us not just about development provision, or the making of the state, but about the nature of postcolonial citizenship. Though citizenship in decolonizing Kenya was built through the promise of state resources, these promises were not delivered universally or equitably. Through negotiations over development, Kenyan citizens, state officials, and development actors delineated a spectrum of citizens’ rights and duties, and an irregular set of state obligations, differentiated by ethnicity, gender, religion, and class. As new inequalities materialized, Kenyans began expressing disparate ideas about citizenship.

Many scholars have argued that non-state actors, such as NGOs or civil society, did not come to play a pivotal role in development until much later. Yet, in the early postcolonial era, state actors navigated a complicated development topography that enmeshed local, national, and global politics, and they were never able to determine development practice on their own. Indeed, a number of development programs made local communities responsible for the labor and administration of their own development, initiating privatization, minimizing the role of the state, and increasing inequality. Such practices laid some of the groundwork for the neoliberal interventions of the 1990s. Looking more carefully at the continuities between the 1960s and the 1990s prompts a major reexamination of global economic history.

Many of the issues early independence-era development programs first brought to the foreground have endured, with powerful repercussions. At independence, Kenyans assembled a citizenship toolkit to achieve their aspirations, pursue aid, define and protect their rights, and demand the state take on expected obligations. But the state acted erratically, and distributed development unequally, often to purchase rural political loyalties. Though many contested these injustices, sometimes quite successfully, state inconsistency pushed rural Kenyans to invest in other institutions, especially ethnic citizenships. It was not inevitable that ethnic ideologies would overshadow much else. In the mid- to late 1960s, some Kenyan politicians and citizens advocated effectively for a redistributive state. Ultimately, ethnonationalist ideologies dominated, localizing political dissent and frustrating discussions centered on class or economic inequality.

The uneven distribution of development resources and social services produced new material existences, preserving—and in some cases, expanding—the unprecedented inequalities colonialism had first introduced. Growing disparities perpetuated and evolved long-standing debates within Kenyan society about justice and egalitarianism in their communities and in their nation. Since independence, such inequalities have remained largely unaddressed, though they have continually threatened the postcolonial order, creating discontentment and catalyzing resistance.

Kara Moskowitz is an assistant professor of African history at the University of Missouri-St. Louis.