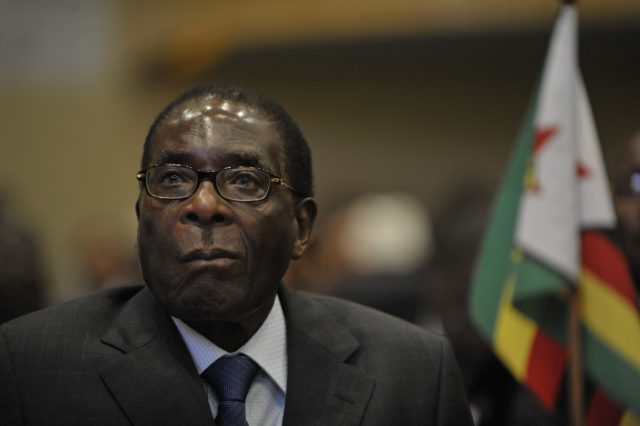 The reality of Zimbabwean politics without former president Robert Mugabe is fast fading. With over 100 days in office President Emmerson Mnangagwa’s next challenge is to brace for a multi-fronted presidential election contest. However, Mugabe, deposed in a military coup in November 2017 is making a comeback. Not known for making concessions or compromises, Mugabe has backed the National Patriotic Front (NPF), which has appointed Ambrose Mutinhiri as its interim president.

The NPF is not like the other dozen or so political parties formed in the run-up to the 2018 elections; it seems to be Mugabe’s own proxy party. Besides the obvious fact that Ambrose Mutinhiri has briefed Mugabe about developments in the NPF, there are other factors pointing to the centrality of Mugabe to the party.

The NPF’s formation, largely attributed to Jonathan Moyo ‘was initiated on 19 November 2017 in direct response to the military coup four days earlier’.  That same date is when Mugabe made a state of the nation address, in which he was widely expected to resign. Instead, he ended his address by saying: Let us all move forward reminding ourselves of our wartime mantra iwe neni tine basa (you and I have a job to do).’ That wartime mantra, iwe neni tine basa, is the tagline of the National Patriotic Front. This is not surprising because Mugabe’s address was an act of defiance, and the NPF is an institutionalisation of this.

In his meeting with Moussa Faki Mahamat, the African Union Commission Chair in February 2018, Mugabe said the military forced him to resign. He described the Mnangagwa regime as unconstitutional and illegitimate, suggesting that he was still the legitimate president of Zimbabwe deserving of AU support. In defiance, the Independent newspaper quoted him as saying: ‘there is no more democracy anymore in Zimbabwe. How can it be there when the military is ruling? I’m saying this as Robert Mugabe and, of course, I am not afraid of anyone.’ He repeated this at his private birthday party, and boldly ended his address by chanting the slogans: “Pamberi nekubatana, pamberi nebirthday, pamberi navaMugabe, pasi nevanoda kuvanetsa [Forward with unity, forward with the birthday, forward with Mugabe, down with those who want to trouble him].”

Only a few weeks earlier, the National Patriotic Front had raised the same issues that Mugabe raised in his meeting with Moussa Faki Mahamat. The 79-page petition sent to the AU and Southern African Development Community (SADC) contained pictures of bullet holes and damage caused by the military to Ignatius Chombo, Saviour Kasukuwere and Jonathan Moyo’s houses. Among other things, it called for the AU and SADC not to recognise the Mnangagwa regime and ‘deploy an AU force to monitor and ensure demilitarization of politics, state and government institutions’.

That Robert Mugabe and his wife Grace, together with Jonathan Moyo and other former ZANU-PF officials, are part of the core instigators of NPF is clear. What remains unclear is what their objective is given that they know they know it will be difficult to win in the upcoming elections. They also know that they are much safer cooperating with Mnangagwa than opposing him – already several former ZANU-PF members of parliament have distanced themselves from the NPF.

One reason, according to recent reports, could be that fault lines are emerging in Mnangagwa’s camp. Put differently, there are traces of fragility in the military-civilian politicians ‘coalition’ government. The NPF aims at widening those fissures by playing the military against the police and intelligence services. At his private birthday party, Mugabe gave credit to Vice President Constantino Chiwenga for his attempts at engaging Mnangagwa, while simultaneously describing Mnangagwa as illegitimate – this divide and rule has helped Mugabe stay in power for 37 years. By emphasizing the mistrust between the military, other security agents and the politicians, Mugabe is likely able to cause more harm to Mnangagwa.

Mugabe shaped the national narrative and discourse for the past 37 years. Part of his strategy has been to make his personal ambitions the national objective. The NPF is part of that strategy – it de-personalizes his personal struggles with Mnangagwa. Already, through its petition to the AU and SADC, though unsuccessful, the NPF is inspiring the challenge of the constitutionality of Mnangagwa’s government in local courts. Linda Masarira, an aspiring MP and other activists challenged ‘the alleged unconstitutional actions of members of the ZDF and the security services.’ Although the High Court ruled in November 2017 that the military takeover was legal, persistent court cases retain the ability to shape the national discourse in line with the NPF agenda.

Although seemingly far-fetched at this stage, the NPF seem to be angling to gain enough parliamentary seats to cause a ‘hung parliament’. Without a parliamentary majority, Mnangagwa, even if he wins the presidency, will be incapacitated. Political parties will therefore need to form coalitions to achieve their political and policy objectives, and this could create room for NPF to heavily influence the politics of the country. Mugabe’s meeting with Joice Mujuru in early February 2018 can therefore be interpreted in some ways as an attempt to mend bridges and open possibilities for such a coalition should it become necessary.

In sum, ZANU-PF’s response to the formation of NPF suggests the party has the potential to destabilize the establishment. Since the 5 March NPF announcement that Ambrose Mutinhiri would be its interim president, Zimbabwe’s state-owned Herald newspaper and war veterans have launched scathing attacks on Mugabe and Mutinhiri. ZANU-PF Chairman Simon Khaya Moyo has called for a press conference to refute allegations that Mugabe was forced to resign and cast aspersions on Mugabe and Mutinhiri.

Regarding Mugabe, issues of his multiple farm ownership, externalization of state resources, and allegations that he rented some of his farms to white farmers have been revealed. Mutinhiri’s war credentials – all important in Zimbabwean politics – have also been challenged, and several former ZANU PF MPs have distanced themselves from NPF. It seems that Mnangagwa realizes the damage Mugabe can cause and is leaving nothing to chance.

The 2018 elections are no longer as certain as they initially were for Mnangagwa, Mugabe is back with vengeance.