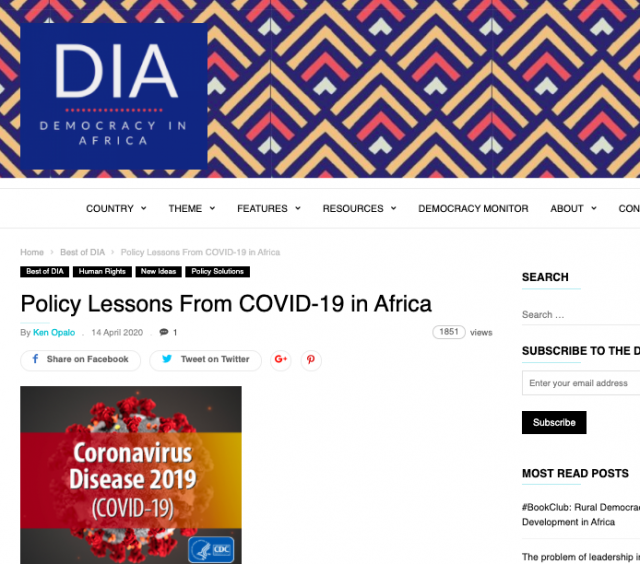 In this post, Washington M. Osiro responds to Ken Opalo’s thought provoking and popular post on Policy Lessons From COVID-19 in Africa, which you can read here.

In the book “The Tyranny of Experts: Economists, Dictators, and the Forgotten Rights of the Poor,” Professor of Economics William Easterly uses the expression “linguistic evasion” to describe the World Bank’s use of language and terminology that illustrates the institution’s lack of commitment to ideals it frequently lectures Africa about. After reading Prof. Ken Opalo’s article “Policy Lessons From COVID19 in Africa” in the April 2020 issue of the Democracy in Africa newsletter, I could not agree more with the characterisation.

Prof Opalo’s piece illustrates how Africans have allowed discussions about potential solutions to what ails their often – but not always – resource-rich but incompetently governed and underdeveloped continent to become mired in esoteric and abstract exchanges accompanied by abstruse language. Lost in these discussions are publicly available data (from organisations such as the World Bank, African Development Bank-ADB) that show a continent falling further behind in nearly every metric used to measure social and human development. Also overlooked – and certainly crowded out – are pointed discussions about practical solutions to the continent’s many problems and commensurate follow-through by its Western (and Chinese) benefactors.

Prof Opalo writes that Africa “needs a lot more descriptive studies about her various economies.” Now, Scribbr defines a Descriptive Study as one that seeks to “accurately and systematically describe a population, situation or phenomenon – by answering What, When, Where, and How questions, but not Why questions.”

The way I see it, countries that have been independent and self-governing for an average of forty-plus years do not need more studies to describe What ails their respective economies – and When and How these economic maladies (first) came to be. While Opalo is surely right that more data is always better than less data, these countries surely have sufficient data that illustrate the many challenges facing them – including misuse of funds that should have been spent improving the continent’s network of roads, railways and airports. Aside from using that data to improve her infrastructure, African leaders should use it to prosecute those implicated in misappropriating the funds. Similarly, the billions that have been appropriated towards improving the continent’s agro-industry should have made a dent in the continent’s endemic food insecurity were it not for the rampant corruption and their misappropriation – both perpetrated at the highest level of the continent’s leadership.

Presenting the use of data to formulate policies as a novel process is what Prof. Easterly refers to as the “tyranny of experts.” It strains credulity that Kenya’s leaders are oblivious to the fact that inhabitants of Kibera, land of the “Flying Toilets,” do not have access to reliable running water – to drink or to wash their hands – or power with which to charge their cellphones and access the electronic cash transfers – to soften the economic hardship caused by the coronavirus lock down.

A continent whose best and brightest walk the corridors of the world’s most prestigious academic institutions, organizations, and multi-nationals should not have a dearth of expertise in its political economy or economic history. Putting to use economic development theories that students of the field have seen succeed elsewhere should be less about discussions about “strengthening policy transmission mechanism” and more about Why Africa has failed to put into practice what many of their leaders should have learnt or experienced in these institutions, organizations, and corporations.

The discussion should therefore seek to answer the question: What prevents Africa from transforming its highly sought strategic minerals/natural resources into high-priced consumer goods for sale elsewhere?

Expecting the continent’s clearly selfish leadership to ask itself how the COVID19 shutdown will impact the lives of people in the rural areas is another example of the rote intellectualism African leaders along with foreign “experts” i.e., “outsourced thinking,” have engaged in since independence. Most of them do not ask how their policies will impact the lives of their constituents because they already know the answers. These leaders know that they never built the stadiums they promised their constituents, structures that could have been used to stage COVID-19-related logistics activities. Likewise, they know that they never delivered the laptops which could have facilitated online learning for students whose lessons were disrupted by the virus. These leaders also know that no one will be held accountable for misappropriating the funds allocated for these projects.

There is nothing surprising about the dilapidated state of the continent’s healthcare sector or how it came to be. And couching the discussion in grandiose terms such as “elite mediocrity,” “utility of aid,” and “elite-level African alliances” only serves to obscure the problem. This kind of jargon also provides cover for those directly responsible for running down the sector by funneling away its resources and funding. I also find it misleading to credit the current pandemic for exposing the dire state of the continent’s healthcare system and its non-existent safety net because both states-of-affairs have been in plain sight since independence. Expecting the supposed “domestic crises” currently engulfing Western countries to spur Africa’s leadership to use the continent’s vast resources to improve African lives is reactive and continues to see the source of political and economic renewal in the global system. If Western countries and China can set out to make their respective societies “great” again, why can’t Africa do the same?

A “woke” Western elite and coronavirus-chastened China should not be the reason Africa’s leadership chooses to do right by their constituents. The allusions of dependency embodied in this thinking explains why the continent’s elite still seek medical treatment abroad – instead of developing their domestic healthcare capabilities. If African’s best and brightest can decode the machinations behind a global health system whose design intent is to “to police and contain disease outbreaks in low-income countries,” they can decode its main beneficiaries. The continent’s brain trust can also put in place mechanisms to counter the negative impact of this system on the continent.

In their book “Decolonization & Independence in Kenya: 1940-1993,” B.A. Ogot and W.R. Ochieng write that at independence “Jomo Kenyatta and his associates preserved what they most needed from the colonial state……” They did this to maintain power much like the colonialists did. Journalist and human rights’ activist Maina Kiai echoed this sentiment in his March 2013 piece titled “Homeguards never quite went away, their spirit is still strong among us.” Kiai argued that “Uhuru did the same thing his father did including staffing his family’s British education curriculum-based Peponi School” by British-trained educators. Even his legal team during his crimes-against-humanity case at The Hague was led by Queen’s Counsel and British citizen Steven Kay. Summarized, the seemingly novel construct of “elite complacency” – a term used to define the smugness of African leaders and their continued efforts to emulate the colonial administrators of yore – is not new. Like many post-independence attempts at economic development, Africa’s elites, probably feeling a kinship with the former colonialists, have allowed themselves to be co-opted or bought – by the same colonialists they supposedly freed themselves from.

During the 1961 Conference on Tensions in Development hosted by the Council on World Tensions at New College, Oxford, Tom Mboya spoke of an “underdeveloped Africa where mass poverty is universal…..(and was deficient in) schools, social services, hospitals, universities, and technical institutions…..” Mboya also talked about an Africa whose people were “entitled to a better life.” Unfortunately, the reality of a continental history repeating itself becomes obscured by terms such as “African Progressivism” – its history notwithstanding. Lost in this highbrow characterisation of continental ineptitude is the infidelity of African leaders towards the democratic ideals to which they only pay lip service. In his speech, Mboya – who would be assassinated in 1969 – offered a pragmatic solution to Toby Green’s construction: that overcoming the historical, cultural, social, economic, and political “tensions” that remain at the root of all that ails the continent’s many groups depended “on the honesty and quality of African leadership.”

Unfortunately, rather than resolving these tensions, African leaders have used them to rally their supporters against their opponents. Added to this consideration is the wily way that successive leaders have intimidated, harassed and censored opposition. Given this reality, I fail to see the “viable political programs” that Prof Opalo has in mind as antidotes to the continent’s entrenched presidents-for-life and permanent opposition parties.

Using Kenya’s Building Bridges Initiative (BBI) as an example, I do not see a critical mass of African leaders rethinking how they have led their countries thus far. I also do not see them reorganizing their governments in any meaningful way – to “infuse (them) with new thinking and moral foundations of social contracts.” I say this because leadership across the continent remains the same or beholden to a kitchen cabinet dominated by the same “complacent elites” – all with ties to the past. These are people ready to protect their personal interests by any means necessary. Those providing cover for these continental leaders are the usual suspects – a cabal of foreigners from the west and now the east – only too willing to underwrite their ineptitude for a share of the continent’s reserves of natural resources.

At the most basic level, then, African governments need to channel a very different model of leadership, looking to figures such as Singapore’s Lee Kuan Yew. They must focus in on reducing corruption, improving governance while crafting cohesive societies. Until they do that, it will take at least another generation for the continent to rid itself of the current crop of “Big Men” and match the socio-economic (and political) development of its erstwhile Asian peers.

This is a fundamental political reality that Prof. Ken Opalo and other thought-leaders know only too well and must be much more careful not to evade or gloss over.