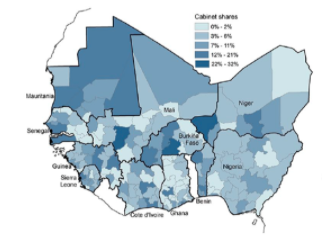 Research shows that political elites tend to favour their home region when distributing resources. But what explains how political power is distributed across a country’s regions to begin with? Joan Ricart-Huguet draws on recent research to show that colonial-era education underpins the distribution of political power in post-colonial Africa.

Ministerial appointments are highly coveted government positions among the political elite in Africa and elsewhere. This is for good reason. Cabinet ministers enjoy some amount of discretion over the allocation of resources, especially in countries with weak institutions and weak legislatures. This turns a cabinet post into a very valuable means to satisfy one’s constituents. A wealth of research shows that political elites disproportionately favour their home region, especially in less democratic countries. As Robert Bates once wrote, ‘in the political arena, it is not just power that is at stake, but also the benefit which power can bring.’

Perhaps because of how much is at stake, the formation and composition of government cabinets is always conceived as a short-term and highly strategic affair, in Africa and globally. Some scholars argue that cabinet formation is the result of so-called ‘regional favouritism’, whereby the president/prime minister favours his or her own region or ethnic group through patronage in the provision of public services and goods and even ministerial appointments. They have a point. Just consider the many presidents who engaged in such patronage: Houphouet-Boigny in Cote d’Ivoire favoured the Baoulé during his 33-year rule; Museveni in Uganda has favoured Western Ugandans since he rose to power in 1986, and so on. Other scholars argue instead that, especially since the African democratisation wave of the 1990s, ‘regional balancing’ is preeminent –  the idea that ‘representation in a president’s cabinet has to appear to be equitable’ to avoid conflict. They also have a point.

However, in a recently published article, I show that these two short-term explanations are incomplete. I made the realisation after coding the birthplace of most of the roughly 5,000 ministers in cabinets in 16 countries – the 16 former British and French colonies in East and West Africa (Figure 1). The map, while perhaps interesting visually and to show the extent to which districts are represented in the cabinet in the post-colonial period, is only a snapshot.

Figure 2 is more helpful. It shows the percentage of ‘minister-years’ (most ministers stay in power for more than one year) by district in Uganda and Senegal between 1960 and 2010. If regional balancing produced equitable distributions of minister-year shares, then the distribution would be uniform (the left graphs would be flat) or proportional to population (the right graphs would be flat). Neither is the case. Some districts have systematically punched above their weight since independence and others below.

For example, Western Ugandan districts such as Ankole and Kigezi have punched above their weight and, in Senegal, 14% of the minister-years were born in Saint Louis even though the district comprises less than 2% of Senegal’s population. Western districts in Uganda are over-represented partly because President Museveni (1986–) was born there, but regional favouritism alone cannot explain the patterns in Figure 2 either. In Uganda, other districts outside the Western region are over-represented, and, in any case, patronage-type explanations beg the question of why leaders such as Museveni hail from one district or another in the first place. Regional favouritism cannot explain the case of Saint Louis either: no Senegalese president was born there. In spite of post-colonial political instability in many East and West African countries, district representation in the 1960s positively correlates with district representation in the 2000s (ρ = 0.46). This clearly points to persistent inequalities in political representation that neither theory can explain. What does underpin these patterns of political representation?

I offer a deeper historical explanation rooted in the colonial period. Indeed, a vibrant research agenda exists on the consequences of colonialism for economic development, but I leverage the colonisation of East and West Africa to examine instead how colonialism influenced political development, and specifically the distribution of political power since independence. I show that colonial-era investments in education – but not in infrastructure, health or other development proxies – increase district representation (the minister shares of Figure 2) in postcolonial governments. The political effect of education, proxied by the number of teachers and missionaries per district, is larger in the 1960-1990 period but persists even after 1990 in spite of regime changes and instability during the Cold War. The effect is also very visible in civilian governments, the majority, but largely null in military governments. Why?

I argue that post-colonial ministers are in part a byproduct of education-based recruitment into the colonial state. Europeans administered East and West African colonial states ‘on the cheap’, so they recruited educated Africans instead of Europeans as civil servants to reduce costs (whereas individuals from districts with little to no education provision ended up in the military). As a result, districts with more primary education provided a larger pool of potential candidates to join the civil service and colonial-era legislative councils (assemblées territoriales in French colonies).

Europeans had little concern for regional balancing until the 1950s. Regional political inequality was the unintended long-term consequence of this selection criterion whereby education – or more often lack thereof – conditioned the pool of potential ministers from a region (in extreme cases, such as Uganda’s Karamoja region, there were no secondary schools at independence in 1962). Literacy and numeracy learned in school were transferable to the civil service. In turn, organisational skills acquired in the civil service and in colonial legislatures provided some with an early advantage in post-colonial politics. For example, Saint Louis had ceded much of its early importance to Dakar, the economic and political capital, by 1900. However, Saint Louis remained an important centre of primary and secondary education and that helps explain its over-representation after 1960.

If (unequal) colonial education is important to explain (unequal) political representation since 1960, then what explains why education was scarcer in some colonial districts than others? I tackle this question in a related article, summarised for the African Economic History Network (AEHN) blog. I show that coastal areas with natural harbours and capes (such as Mombasa, Dakar) were much more likely to become centres of pre-colonial trade in East and West Africa. Those pre-colonial trading posts, and districts near them, concentrated the bulk of government and missionary education during the colonial period. These are the deep roots of East and West Africa’s unequal economic development and unequal political representation.

This article first appeared on the fantastic LSE Blog. To read it there, click here