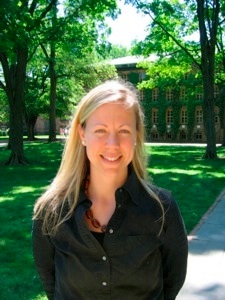 Last month saw the release of Rachel Beatty Riedl’s new book, ‘Authoritarian origins of democratic party systems in Africa’, which has been published with Cambridge University Press. In this blog, Rachel tells us about her exciting research and the important contribution it makes to the study of democracy in Africa. Rachel is an Assistant Professor of Political Science at Northwestern University.

To explain these country’s divergent development, I point to earlier authoritarian strategies to consolidate support and maintain power. The initial stages of democratic opening provide an opportunity for authoritarian incumbents to attempt to shape the rules of the new multiparty system in their own interests, but their power to do so depends on the extent of local support built up over time. Where authoritarian incumbents are strong, they tightly control the democratic transition process, which paradoxically leads to higher party system institutionalization in the new democratic system.  Conversely, where authoritarian incumbents are weak, they lose control of the transition agenda and new players contribute in uncoordinated ways to press for greater reform and more open participation, which results in lower party system institutionalization in the democratic era.  The particular form of the party system that emerges from the democratic transition is sustained over time through isomorphic competitive pressures embodied in the new rules of the game, the forms of party organization, and the competitive strategies that shape party and voter behavior alike.

Authoritarian Origins of Democratic Party Systems in Africa marshals original research in Ghana, Senegal, Zambia and Benin along with cross-national statistical analysis to show that the power of the authoritarian incumbent to control the transition agenda and create the formal rules of competition in its favor has far-reaching and unintended consequences for the development of the party system.  Sub-national crossnational case comparisons in three corresponding districts in each of the four country cases leverages over 260 interviews with political party members at the national and local level.  The district-level cases were selected based on a combination of census and survey data, economic indicators, electoral patterns and geographic and demographic features. Empirically, I demonstrate that rival explanations of levels of economic development, ethnic demographics and electoral system institutional design have limited predictive power in explaining the variation in party system institutionalization in African democracies.

My argument contributes to an ongoing discussion regarding democratic institutions and their impact on regime endurance and governance.  In Africa’s heterogeneous societies, institutional variation can have important repercussions for democratic stability and quality, peace or conflict, which leaders are selected, and what agendas they pursue.  This research suggests that formal democratic rules are important for how democracy is practiced, but emphasizes that rule construction is an historical process.  Power struggles often determine who can craft the rules in their favor, and yet, once set, rules provide unanticipated constraints and opportunities for further interpretation. More broadly, my empirical research and theoretical claims can contribute to policy debates about political party systems in the developing world, multi-layered forms of representation, and their application to governance and peace in new democracies.

Abductions, Brutality, and Demolitions: When the State becomes more harmful than COVID-19